Missy Biron, known publicly as Vista, is a member of the Brockton Bay Wards, and later of the Wardens.

Strong-willed and focused, Vista is confident in her abilities. Despite having been through several major traumatic events, she has always been able to bounce back and is far more capable than anyone has given her credit for.

Vista viewed herself more as "Vista" than "Missy", and took extra shifts to escape the oppressive atmosphere at home generated by her parents' divorce.[2] Developed something of a fatalistic mentality after the deaths among the wards following Leviathan's attack.[1] She saw herself as a child soldier.

She was horrified at the prospect of Defiant modifying himself with cybernetic enhancements.[4]

She had a crush on Gallant and was devastated when he died, staying by his bedside when he expired.

Despite getting off on the wrong foot at first[5] she connected with Weld[6] following his counseling.[7] She did the same with the more experienced Dr. Yamada and grew into becoming the heart of the team.[8]

She became acquaintances, if not friends, with Rachel after several major calamites. They easily collaborated during the Assault on the fallen.[9] Missy's civilian attire was seemingly influenced by Rachel's tastes. [10]

Victoria and Missy have a strong friendship, referring to each other as 'Big V' and 'Little V'.

Missy is romantically interested in Byron, but he is hesitant to move forward with their relationship due to unfortunate circumstances with his brother.

Everyone in the know is aware of her abilities, and rightly fears her despite her age.[11]

As a member of the Wardens, she often accompanies Narwhal and Cinereal.[12]

Vista wears a costume with a skirt covered in wavy, swooping lines alternating between white and forest green, panels of body armor, and a green visor.[13][1] She has wavy dark-blonde hair,[14] but straightens it when costumed.[15] Her eyes are green.[16]

During the The Slaughterhouse Nine-Thousand event, she carried a powerful Tinker weapon, likely given to her by Kid Win,[17] capable of disintegrating a whole vending machine,[18] as well as people. Two years after Gold Morning she updated her costume somewhat, adding a scarf and showing off the skin on her legs and arms.[19]

Over the course of her career as a hero, she gained a large collection of scars—small scars on her hands and legs, a dime-sized keloid scar on the top of one foot, and an inch-wide scar on the right side of her chest, among others.[2] During Slaughterhouse 9000, she was cut across the face by a Murder Rat, whose scars do not easily heal. Later March added another substantial scar to other side of her chest.

Vista is a spatial warper. She has the ability to distort space (stretching, compressing, bending, etc.) by creating a series of events that modify the material.[20] The presence of living creatures interferes with her ability. In the absence of people, her power was potent enough to distort the horizon, and alter travel times on a continental scale.[21]

As with many shakers, time is a crucial element for her. The more time she has in a particular area, the greater the amount she can shape.[11] Her power and reflexes are too slow to deflect or redirect projectiles[22]. However, she was able to reduce the distance Crawler's spit moved to a tenth its usual distance,[23] so projectiles passing through a prepared warped area may be affected. She learned to shape corridors that would curve bullets and other projectiles.[24]

Vista's power provided her with a mental map of the terrain[25]. She usually needed solid matter to "anchor" her power to.[26] She was able to target specific objects, which remained small and lightweight until her power wore off.[2][27] Because of her skill at using her power, especially compared to other shakers in Brockton Bay, she was classified as a Shaker 9.[3]

She could shrink part of an object like the leg of a chair or the wheels of a car.[22] Or make huge treadmill areas to keep people from coming closer to her.[28]

Interestingly, her powers seem to confuse some thinker powers[29] and computers.[30]

Vista can anchor her space-warping effects on projections and tools vastly increasing their size.[33] She can also do this by manipulating the space that matter creation and energy occupies to either decrease[34] or increase the effected area. The parahumans may find this effect difficult to work around.[35]

Missy triggered in 2009, joining the Wards a month shy of eleven.[2] It is implied that her trigger event was due to her parents' hostile relationship with one another. Her father had cancer, and her mother cheated on him with his brother. Her father then got back at her mother by getting rid of her dogs. This enmity grew over time.[37] They divorced, causing her to withdraw into her position as a Ward and identity as Vista.[38]

She had a scar on her chest where she was stabbed by Hookwolf and sewed it up herself, rather than risk looking like a baby in front of her team.

Vista was deployed alongside her teammates once news arrived of the Undersiders robbing a bank. Shortly after she arrived, the Undersiders released some of their hostages before Grue flooded the street with darkness. She took a few steps backward to avoid being caught in it and then used her power to swell and widen the street.

After Aegis and Clockblocker had been taken down, Bitch rode Judas towards Vista. Vista raised a short wall to trip Judas and send Bitch tumbling off. Gallant hit Bitch with his power and Bitch sent Judas after him before going towards Vista. Vista stretched out the space between them and then pinched the space behind her and crossed a third of a block before returning the street to normal. Grue stumbled out of the darkness near Vista, screaming about bugs, and then collapsed. Thinking that he was Browbeat, Vista approached to help, and Grue struck her against the side of her head, knocking her down. Grue then covered them both in darkness.[39]

Later, Vista traveled to the PRT Building where her team was met by Director Piggot, who berated them on their poor showing. After the team, sans Kid Win, arrived in their quarters, Gallant asked Vista to grab two whiteboards. She grabbed the whiteboards, set them up, and blushed after Gallant thanked her.[40]

After the new leader of the ABB went crazy and broke out her predecessor from custody, the other villains of Brockton Bay banded together to take on the ABB operations, while the heroes focused on the leaders themselves. In capturing Bakuda in her workshop Vista and Clockblocker were able to stop Bakuda's final bomb.[27][41] In doing so they saved the city from an EM Pulse that would have devastated the east coast.

She lied to get into the Battle against Leviathan.[42]

With Weld called in to lead to Brockton Bay Wards, Vista was willing to give him the benefit of the doubt when it came to him serving as leader.[43] She had an argument with Dennis over the disagreement he had with Victoria. Vista later participated in a skirmish with The Travelers, and was prioritized as the most dangerous threat.[44]

Weld assigned Flechette to Vista to get a second opinion on how she was acting. Meeting her, she gave her a pep talk about life and told her it was okay to cry. Getting into a confrontation with Shadow Stalker, she asked why the other hero was so disdainful of emotions and her attachment to Gallant. Shadow Stalker slammed her into the wall before leaving on patrol.[2] When Shadow Stalker returned, supposedly having captured the Undersiders by herself, Vista was suspicious.

Vista was one of those who volunteered when Director Piggot asked for volunteers to flight the Slaughterhouse Nine. When deployed against the killers, she was able to keep Crawler at bay while other members were being retrieved from Cache.[45]

During the attack by a new S-class threat, Vista was taken out early, deliberately kidnapped before the Protectorate was fully informed about the threat.[46] The duplicates that the threat created harried the responding forces and prevented them for disposing of the threat for hours.

Eventually freed, Vista was trapped in the ruins of Coil's base, and while digging through the rubble, she met Shatterbird. Forced to defend herself, she killed her fellow shaker.[47][48] She was later reunited with her team.

Vista reacted badly to Flechette's defection and blamed the supposedly surrendering Skitter for Flechette's actions.[49] It is unknown if Vista participated at New Delhi like her fellow Ward teammates did.

At nearly fifteen, Vista was one of the most experienced capes in the wards. She was chosen to deploy against the Slaughterhouse Nine due to her versatility.

Late in the story, on the near un-populated Earth Bet, Vista extends her power over a huge track of land, from one end of the horizon to the other, as she is not limited by the number of people there.[21] She uses this in combination with another cape called Silk Road to provide transportation while Doormaker was unconscious.

She later joined the Wardens, and accompanied Miss Militia in her meeting with Bitch, who preferred being called Rachel.[50]

Working with the Wardens, she helped deal with a broken trigger event at a workers' protest, where she was helped by Victoria and Laserdream.[51]

She was finally able to meet up with big V during preparations for the Mathers Compound Assault, and expressed an interest in meeting up some time.[52] They later fought alongside each other during the battle. Vista also found that she worked well with Capricorn, though Victoria later confronted her about Capricorn when she noticed their getting along.[53] She had enough control over her power that she was able to fly on one of Narwhal's force fields by bending space to change its path.[54]

She was mobilized as part of Wardens during the African crisis.[55]

Vista fortified the ruins of Brockton Bay with extensive use of her powers, in order to defend it from an attack by March and her team. This ultimately resulted in her being "killed" by March during her rush to the time-bubbles.[56] It later turned out that this was a fake-out, and that Vista had shortened March's blade as it had entered her chest plate, stopping the attack from being lethal.

The morning of next day, this fake-out was used to outplay and kill March, and scatter her team.[57]

Decided to get ahold of some boyfriend before her tits get completely torn off by another superpowered psychopath.[58]

Vista escorted Breakthrough to Earth Shin together with Golem and Miss Militia, and was imprisoned with them. She was instrumental in bypassing the prison's security and foiling Shin's provocations.

Fought in Cinereal-led group during the second Wardens' assault on Teacher's Compound.[59]

Vista was reprimanded by Narwhal for the event with Capricorn.[61]

Vista was in the Narwhal's team during the assault against the Titans.[62] During the off-time she briefly visited Breakthrough and Byron Vera several times.

During the fights with The Simurgh she stayed by the side of Byron. With the help of Clockblocker during the initial fight they attempted to anchor and freeze The Simurgh through Byron's constructs.[63][64][65]

During the parahuman plague deployment Vista helped out with the logistics. She received the virus from Victoria and through Byron, after assurance that it will not knock her out too early.[66] During the sleep she met shard-ghosts of Gallant, Bastion, and Aegis.[67]

Vista was promoted to the leader of Junior Wardens team.[68] 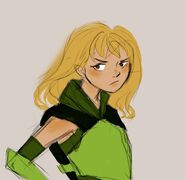 Illustration by nethernity on deviantart

Image by LinaLeeZ on DeviantArt.

Image by aerryi on DeviantArt. 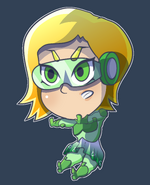