Worm Wiki
Register
Don't have an account?
Sign In
Advertisement
in: Males, Villains, The Fallen,
and 8 more

Interlude 4.a II (Mentioned)
Interlude 4c II
Elijah Mathers, Valefor to outsiders, is a member of the Fallen.

Valefor had a hard time with Mama Mathers' power for the first few years, so he put a compulsion on himself to enjoy it and be loyal.[5][6] He was willing and able to kill people to further his own ends.[7]

Before the Undersiders defeated Valefor, Accord described him as arrogant, impetuous, and immature, but rather cunning when he puts his mind to something.[8] Valefor deliberately crafted his costume to provoke those in Brockton Bay.[9] Further, he showed no respect for the current holders of Brockton Bay, likely meaning to provoke them as well.

After Gold Morning, Victoria Dallon described Valefor as a subtle player who wasn't a warrior or a general.[10] She got the impression he wasn't comfortable in a large fight.[11] Teacher believed he was accustomed to servitude[12] and was a complete monster that other Fallen detested and feared.[13]

Before his defeat by the Undersiders, the PRT only knew he perpetrated major subterfuge; they did not see him use the full extent of his control.[3] Valefor played up the telepathy angle before people caught on to his hypnotic gaze, though it was widely believed that Valefor did not murder.[2] However, he had covered his tracks using his power; Skitter was surprised at his orders to kill or commit suicide.[14] After his defeat, arrest, and trial, Valefor's exploits in Brockton Bay became more public[15] and his original power better known.[16]

His mutilation and subsequent shift in powers was not common knowledge.[17]

Valefor has a thin build with little muscle and speaks with a slight southern tang.[18] He has tattoos that color his thin lips black and extend from the corners, depicting fangs that nearly reach his jawline, with the points alternating up and down.[19] His hair is long, straight, and blonde.[20] He would later dye it white to match his mothers own dyed hair.[21] He generally wore a sly smirk.[19]

On at least one occasion Valefor dressed in a teenage girl's top and skinny jeans, using makeup to hide his tattoos in order to hide among a crowd.[20]

Four years after Brockton Bay, his eyes had become a mess of cataracts that blinded him.[21]

As a cape Valefor wears a delicate-looking mask with no eye-holes; a woman's upper face with closed eyes. His costume is effeminate, with white and silver feathers on flowing white clothing that clings to his body, and a corset. His tattoos were visible beneath the mask.[19] The costume was an attempt to carve out his own identity for himself as he was making his own Fallen cell.[22]

Four years later he wore a totally white outfit, complete matching white vest, trousers, shoes, and walking stick,[23] even dying his hair to match the wrap around white segmented mask with his dark tattooed lips. He decorated his hair with feathers, possibly as a nod to the Fallens former 'patrons'.[24]

Valefor has a "hypnotic stare" - the ability to render anyone he looks at with his naked eyes[25][26] stunned and suggestible to his commands.[2] Although Accord[25] and Skitter[26] implied he did not require eye contact to use his hypnotic stare,[27] Rain O'Fire Frazier[28] and Victoria Dallon[16][29][30] believed he did need eye contact to use this power. Mama Mathers[31] and Valefor[5] also implied he needs eye contact. After his defeat by the Undersiders,[3] his page on the Parahumans Online wiki or other records mentioned how he was a hypnotist Master who needed eye contact.[16]

He could use this ability to implant suggestions that trigger under particular circumstances or through direct orders;[2] this included the memory of him even giving the order.[14] Given this procedure, victims were often initially unaware they had been affected.[25] Additionally, he can cancel previous orders through another spoken command.[32] He was able to see Imp somehow; according to Tattletale, he might have other senses or augmented awareness to track victims.[33] By looking himself in the eye via a mirror, Valefor could use his power on himself.[5][6]

After the loss of the use of his eyes, his power seems to have shifted and given his words more weight than they once had.[34][35] His voice power is largely unchanged from what was showcased before, but people are able to think of ways around his commands.[36][37][38] Further, people can resist him if they don't think he is speaking directly to them.[39][40] If Tristan or Byron heard a command, then the specific identity that heard Valefor would be affected.[41] However, they could avoid Valefor's voice power by changing forms rapidly so that no one self heard the full command.[42]

Valefor could use both his eyesight and voice powers after obtaining tinker-tech eyes from the Taught.[12] However, he needs eye contact to use his eyesight power; despite looking directly at Love Lost, he could not apply his power until she opened her eyes and looked at him.[43]

After Valefor commanded a visible Imp to kill her teammates, Regent hijacked Imp and had her attack Valefor.[7] When Skitter was stunned and rendered suggestible by his hypnotic stare, her power still unconsciously carried out her intent to send bugs towards his eyes; Imp then stopped him from telling her to stop.[44] If Valefor ordered a target to stop, and then a stumble or push moved the target later, this was enough to break that order.[45][46][47] When he commanded Colt to commit suicide with his voice power, Chastity used her power to remove this order by slapping Colt.[48]

The Graeae could swap body parts out so that if someone encountered Valefor with a body part (i.e. ears, eyes), he is only able to affect that body part's original owner.[49] Cryptid's Dark Introspection form disconnects the mind from body; he could put his body on autopilot or leave it with instinctive actions.[50] This countermeasure against Masters was effective against Valefor, allowing Cryptid to attack him and his group.[51] Teacher requested Scapegoat to transfer Valefor's self-inflicted compulsion to someone inconsequential because he didn't want Valefor's loyalties divided.[52][6]

According to his mother Elijah became a parahuman in the first years of his life, which necessitated Cauldron involvement and her accepting the vial.[53]

Elijah grew up in the Mathers branch of the Fallen, with his mother calling the shots.

Valefor traveled to Brockton Bay alongside Eligos before setting up residence somewhere within Imp's territory.[54] At one point, Skitter tried to help find them, but she was unable to root them out despite having Tattletale's help in identifying the general area.[55] However, Tattletale suspected that one of the two was Valefor.[56]

He and Eligos were invited to a meeting with the Undersiders to talk business. Valefor scoffed at the warladies "rules" and informed her that she would be fighting her soon, ignoring that Skitter saying he and Eligos wouldn't be in the Bay long.[57]

At some point after this meeting, Skitter, via her swarm, found Haven members Rosary and Halo attempting to arrest Eligos in Regent's territory.[58][59] Skitter believed Valefor had to be somewhere nearby Eligos.[26] However, while Skitter and Regent started attacking Eligos and Haven to look like the top dogs,[60] Valefor took this time to prepare. He had disguised himself as a teenage girl before using his power on Imp, who strayed away from Skitter and Regent. At a grocery store near Eligos's location, a visible Imp then informed him about Skitter.[61] He compelled a woman to pretend to be his mother and hid in her embrace.

When Skitter and Regent arrived at the grocery store with a swarm as cover, he then stepped out and told the hostages listening to him to kill themselves or to kill Skitter and Regent if they moved. He finished by telling them to forget he had given them orders and directed a visible Imp to go out and kill her teammates before killing herself.

A visible Imp charged at the swarm before Regent hijacked her and had her charge at Valefor. Valefor tried to get everyone to kill themselves, but Imp's body kicked him between the legs. Imp's body pinned him against the ground, knife to his throat, and demanded he cancel his orders. He tried to ask how she had managed to free herself of his influence only to be slapped across the face. After the crowd dispersed, the no longer hijacked Imp struck him again but stopped when Skitter told her to.[7]

Valefor tried to struggle but stopped when Imp pressed the knife against his throat. Skitter blinded him with insects before Imp managed to get the knife in his mouth. Sometime later, he heard someone approaching him and managed to shake off enough bugs to open his eyes. He fixed his gaze on Skitter before the insects she had dropped onto him. He tried to use his power to make her stop only for Imp to move the knife and then bring her knee into his chin. Skitter then stepped on his hand and his struggles intensified until he turned his head to throw up.[7]

Eventually, Skitter told Imp to let Valefor get up before ordering him to walk. Valefor, blinded and exhausted from the ordeal, was then marched to where Rosary was. Skitter shoved him towards Rosary and he tripped. After Rosary realized what Skitter had done, Skitter told her that he would need antibiotics for his eyes and that the choice of saving his vision was up to her.[44]

After being given to the Protectorate he was charged and presumably jailed.[15]

In the time since his failure, he has settled into a new role.

Presumably, he had an experience comparable to other parahumans.

Having survived Gold Morning and presumably released at the time of the event or subsequent amnesty, Elijah found his way back to his family.[62] Stepping back into his role he used his adapted power for recruitment, such as with Lachlan Hund.[5] This did not go unnoticed.[63]

With the assault on the Fallen compound, Valefor stepped into the public eye for the first time in nearly four years.[64]

He was surrounded by helpers and bodyguards to help best direct his power against the attacking villains and heroes.[65] He hypnotized one group very effectively but one hero was able to construe his order to help him to take him out of the battle and leave him out of breath and bruised on a roof.[66]

Later this same hero would mutilate Valefor by punching off his jaw after he escalated a situation.[67] This left him in need of serious medical attention.[68]

Elijah was supplied with an explosive ankle monitor and hospitalized.[69] Soon afterwards Teacher was able to reach him and begin the process of enslaving him with the assistance of Scapegoat.[70]

Valefor was bisected and killed by the combined efforts of Precipice and Chastity.[72]

Image by Pabel and Nine on Tumblr 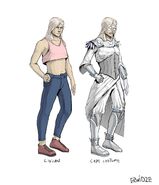