Worm Wiki
Register
Don't have an account?
Sign In
Advertisement
in: Articles in need of cleanup, Characters, Males,
and 9 more

Hive 5.1
Francis Krouse, known publicly as Trickster, is the leader of the Travelers.

Francis is disliked even by his own teammates due to his annoying behavior; he allegedly does this intentionally to unite his team. [1] He often demonstrates a lack of empathy towards the concerns of others if he doesn't share their point of view on the matter, such as in the case of various pranks and stunts of he'd carried out. Outwardly he maintains an image that suits his desires, whether to charm, control, or simply annoy others. His internal dialogue prior to becoming Trickster is shown to sometimes be decidedly more narcissistic and critical of others than he outwardly shows, with a quickness to hold people that he views as inferior in contempt. Though, he may not have been in his right mind at that point in the story. He was a smoker.[2][3]

Francis has light brown skin, long dark hair, and a hooked nose. He has an intense, piercing gaze.[4][5]

As Trickster, he wears a black costume with a red mask and a top hat. His mask had a mouth-hole that he would sometimes use to smoke.[6] His jacket had a pocket he kept cigarettes in[7] and a cellphone capable of recording video.[8]

Francis' power enables him to swap the locations of two objects with similar mass, including himself. [9]

Trickster’s powers only work on targets that are both within his field of view.[2] His speed/ease of being able to swap is dependent on distance (although not as much as one might suspect) and difference in mass – too much of one or the other and it’s not doable in any reasonable amount of time.[10][9] He needs to even out any differences in mass by sucking in surrounding air, which takes time.[11] He can use his powers to feel the weight of an object he is observing, and he has a sense of how easy it would be to swap two targets at a time.[12][13] [14]

Krouse was a competitive gamer from Earth Aleph from Madison, Wisconsin. After being transferred to Earth Bet by The Simurgh, he, like the rest of the Travelers, gained his power from a Cauldron vial.[11] He was able to convince Noelle to consume half a vial of a Cauldron concoction to save her life during the Simurgh attack. (Oliver eventually took the other half.)

Fifteen months later, Krouse was in Boston trying to deal with Accord. However, things went badly when Sundancer burst in to inform Krouse that there was a situation with Noelle, requiring Krouse to defuse things with the irritated and murderous Accord. After both these situations were dealt with, he was contacted by Coil, who promised to work toward a solution to Noelle's problems.[3]

Concluding their business in Boston, the group agreed to work for Coil in exchange for his promise to help Noelle.

Trickster attended a meeting of the super villains in Brockton Bay to discuss how to deal with the ABB.[15]

When Leviathan came to Brockton Bay, Trickster played a critical role in rescuing many capes.

He would begin gaining territory under Coil's direction.

Accompanied Skitter when she went to negotiate with the PRT.

His plan to take on the Slaughterhouse Nine wound up getting Grue captured.

Was part of the plan to kidnap Director Piggot when the Dragonflight came to town.

Sided with Coil when he turned on the Undersiders. When the tables were turned against his benefactor and only hope, Trickster tried to save Coil but failed. He awoke only to see evidence that the man he had put all his hope in had been murdered.[3]

When Coil died, he joined Echidna and faced off against Eidolon.[16]

The Protectorate were eventually able to apprehend him.

Trickster wound up in the Birdcage, where he was turned into one of Teacher's thralls.[17] There, he told the residents of the impending end of the world.[18]

Given that Teacher was able to access a large variety of assets and manpower after his release, it is unknown if Trickster was released from the Birdcage when his master was. Regardless, Trickster was controlled by Khepri along with countless other capes while she consolidated an army to fight against Scion. He was used by Khepri in order to transport Ash Beast through portals, as Ash Beast's excessive heat made it impossible for him to directly move through a portal.[19]

Trickster ultimately died to a beam shot by Scion, instantly wiped from existence alongside a number of capes including Ash Beast and Othala.[20] 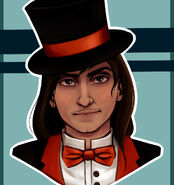 Art by Kingduame on tumblr

Art by Cheeky Herbivore on tumblr