Polarize 10.10
Theo Anders, cape name Golem, is the son of Kaiser and Heith, the stepson of Kayden Anders, and Aster's half-brother.

He often worried that he was unsuited for life as a hero; but according to Weaver, he was extremely brave when faced with a real threat based on their patrols together.[3]

According to Crusader, he was "sharper than he looks sometimes. Sharper than he acts."[4] Jack Slash agreed with this assessment.[5] He dedicated his life to a purpose.[6]

Unlike many of the people he grew up with, Theo was not a Neo-Nazi,[4] and specifically chose his name because of its Jewish origins.

Kaiser is Theo's father. His dad being a neo-nazi, Theo did not buy into his beliefs.

Kaiser attempted to pair them up. It did not work out.[7]

Taylor helped to train Theo. He admitted that he was at least somewhat interested in her romantically, but knew they would never work.

Theo and Ava are happily together.

Theo has shown interest in befriending Rain, due to their similar upbringing.

As Golem, Theo wears a costume with a segmented skirt or kilt composed out of different materials and a mask depicting a solemn expression.

As Theo he is somewhat husky but he is able to put on and take off weight rather easily.

In Ward he appears bigger than Weld.[8] His armor is obsidian black with subtle etchings of hands, and material panels are framed in silver.[9]

Theo received martial arts training from Crusader[4] though Crusader was initially dismayed with Theo's poor form, and further training for his powers under the mentor-ship of Weaver[3] during their time with the Chicago Wards. Theo lost all his sparring matches with Weaver barring one near the deadline for the end of the world, which he suspects to be an intentional loss from Weaver in an attempt to encourage him.[10]

Theo has the ability to embed his limbs into a surface in order to create larger versions some distance away from surfaces with a similar material. Theo is able to use this power with his face though this is not considered useful. The effect works more slowly the larger he works.[11] Theo's power is not hampered by wearing gauntlets or boots as his powers extends through them, resulting in large gauntlets and boots being created when Theo sinks his limbs into surfaces while wearing his costume.[12][13]

Theo's costume includes plates made from common materials, which allows him more mobility while using his powers. The material plates on his costume includes steel, iron, aluminum, woods, stone, brick, asphalt, concrete, and porcelain. Theo is able to sense the position of surfaces with materials similar to the ones touched by his limbs, and by touching the plates on his costume in succession he is able to create a mental map of the terrain.[14] To prevent himself from being disarmed by Theo's powers, Jack Slash acquired a claymore and knife made from materials too different from the ones Theo has on his costume, which were likely made by a Mannequin clone.[15]

His ability to create limbs and faces comes from his mother's powers while the mechanism itself comes from his father.[16] Weaver took inspiration from Kaiser's use of his abilities to teach Theo how to use his, though she kept this a secret as Theo is unlikely to appreciate it.[17]

Theo was raised by Kaiser, whom he disliked. His father was disappointed that he never followed in his footsteps as an athlete and fighter. Theo did inherit his father's intelligence.

Before gaining his powers, he didn't have any friends. [18]

After his father's death Theo was raised by Purity, but she was distant, considering him less important than her daughter or her mission. Nevertheless, they did care about one another.[18]

When the Slaughterhouse Nine attacked Brockton Bay, Jack Slash invaded Kayden Anders' home. Something about Theo piqued Jack's curiosity and prompted him to start a conversation. Theo stated that he wanted to become a hero, and when Jack asked if he would try to capture people like him, he replied that he would kill them.

Jack decided to spare his life, and told him that in two years, if Theo had developed powers he should come to kill Jack. If he failed, Jack would kill one thousand people, ending with Aster and then Theo.

When he triggered, he took the name of Golem to show his disapproval of the behavior of his family by referencing a Jewish story. He joined the Chicago Wards.

Was picked up by the protectorate and given the chance to make up for all the ill his family had caused.

Weaver helped prepare him for stopping Jack and the villain's attempt to End the World.

Was the point man for The Slaughterhouse Nine-Thousand crisis.

He lost all the family members he had to the mad men.

Went to Los Angeles with Weaver's strike team to try and stop Jack. He succeeded in stopping Jack but he still failed in stopping the end of the world.

Dealt with his perceived failure.

In the final push, he used his abilities to create faces of the companion to break Zion's spirit.

He survived the event.

Theo was active with the Wardens, although he was rarely seen.[19]

He was mobilized during the African crisis.[20] Once it was resolved, he accidentally met Victoria Dallon on a train station, and alongside some other heroes followed her to The Navigators ambush location.

Golem was protecting Vista during The Wardens attempt to stop March from reaching Brockton Bay time-bubbles.[21]

Golem was one of The Wardens that escorted Breakthrough to Earth Shin,[22] and was imprisoned alongside them. He saved Victoria Dallon from a worse mutilation.

Fought in Cinereal-led group during the second Wardens' assault on Teacher's Compound.[23]

Golem welcomed Breakthrough to the Wardens' operations room, introduced them to developments related to Dinah Alcott, and questioned them about Contessa. He also confirmed their surprise mission and arranged the portal to the objective.[24]

He was present during the second Shin crisis, and accompanied Rain.[7]

Golem was in the Chevalier's team during the assault against the Titans and The Simurgh.[25][26] 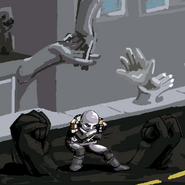 Art by THINKING IN BASE 4