Worm Wiki
Register
Don't have an account?
Sign In
Advertisement
in: Articles in need of completion, Groups and Organizations, Heroes,
and 2 more

Edit
This article is about the superhero team. You may be looking for the story Ward.

The Wards are the under-eighteen sub-division of the Protectorate. Like the Protectorate, they follow the same naming convention; for example, Brockton Bay's Wards would be known as "Wards East-North-East".

The Wards started out as a initiative to recruit the next generation of heroes.[1]

The concept expanded in the ensuing years and improved with organizations like the Youth Guard forming to help bridge the gap between normal life and duties as a cape.[2]

Wards are granted a trust of $50,000 a year, as well as a base minimum wage salary, the latter of which is doubled on full membership. In all other respects, Wards are similar to the Protectorate in membership types and status, but bear additional protections and measures.

Probationary Wards lose their probationary status at the age of eighteen, regardless of their history and record. Wards of any status are not permitted full access to confidential or classified records without permission.

Wards are to attend school during typical hours and maintain satisfactory grades and failure to do so will see their pay docked. Wards must be allowed to receive a full night's sleep with regularity. The Wards' PRT department can remove Wards from school or woken up, but the department heads have been urged to use this in moderation.

Transfer of a Protectorate member involves moving them to a different department. It requires only the permission of the parahuman in question, the originating department and the receiving department. Very often, departments will negotiate additional terms, including attempts to defray additional costs or higher salaries for a period. At times, parahumans are exchanged between departments, with the contracts and terms being linked to both parties.

In addition to the facts and possibilities outlined above, transfer of a Ward requires permission of department heads, all parents, the Ward, one teacher or educational voucher. If there are any, then in-house psychiatrists, outside psychiatrists, therapists, and probation oversight must agree as well. To enable involved parties to cancel an unwanted transfer, any dissenting party can contact a higher office to anonymously and immediately end the transfer process and put it on hold for six months. This is intended to prevent abuse of the Ward or any form of social, institutional, or legal backlash against the dissenter.

Termination of a Ward requires the formation of a tribunal and thorough review. All parties are heard, incidents are detailed and investigated, and all paperwork of any relevance is reviewed. Where possible, punishment or transfer to a better environment is preferred over termination.

Should a termination be deemed necessary, measures taken can include suspension, firing, arrest and execution.

While parental consent is preferred for a Ward to participate in Cape activites if a child has triggered it is not uncommon for the parents or other guardians to be involved with, if not the cause of, said trigger; such cases lead to the PRT inducting the minor should they show sufficent interest.[3] This is a short term solution.

Active membership with all activites that that implies requires parental or guardian consent.[3] 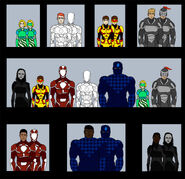 Image by wolfofragnarok on DeviantArt.