Worm Wiki
Register
Don't have an account?
Sign In
Advertisement
in: Articles in need of completion, Groups and Organizations, Coil's Organization,
and 4 more

Gestation 1.5
The Undersiders are a supervillain team operating in Brockton Bay.

The Undersiders were originally thieves operating on a "get in, get out" mindset when pulling off their heists, using their abilities to guarantee success. They only fought to ensure their escape.

They became more aggressive after Skitter joined the team, using hit-and-run tactics in their battles.

Grue required them all to receive first aid training.[1]

Unlike many other villain teams, their criminal activity is on behalf of Coil, from whom they receive a retainer or salary of $2,000 a month.[2] The Undersiders later claim and rule over territory in Brockton Bay in Coil's place.

Months later, they usurp Coil, killing him, and take over Brockton Bay's criminal underworld, focusing on keeping the peace within the city. They gain many legitimate holdings, including an interdimensional portal.[3]

The Undersiders work with a flat leadership hierarchy. They don't have a single leader, but instead rotate based on the situation at hand and available members. Any member could theoretically take the role as leader. The remaining members loyally contribute to their various fights and activities.

The Undersiders were brought together by an anonymous villain through a combination of subtle pressure and bribery over a year before the start of the story.[4] He offered them a monthly allowance contingent on them remaining together as a group as well as individual enticements for several members of the group.[5]

They gained a reputation as robbery and escape specialists, performing corporate thefts for their employer such as robbing the Ruby Dreams casino.[6][7] They were considered small-time, which was intentional on the part of their benefactor.[8][9]

Some time before the story started, they attracted the ire of Lung,[10] likely due to them operating within his territory without consequence for quite some time.[9]

After their confrontation with Oni Lee, they ran into Taylor, who helped them deal with Lung. A few days after, Taylor joined the Undersiders with the intent to betray them later on.

They pulled a job in which they robbed a bank and fought the Wards. Later it is revealed that this is a ploy to distract the Protectorate while Coil kidnaps Dinah.

While retrieving their earnings from the bank job, the team was attacked by Bakuda. After narrowly escaping, they contributed in taking down the Azn Bad Boys alongside the other villainous groups.

After Bakuda's rampage, the Undersiders were directed to crash a Protectorate gala in order to humiliate the heroes and remind the public that it was the villains that had handled the crisis.

When Coil released the identities of the Empire Eighty-Eight to the public, the group was caught in the crossfire.

The entire team joined the fight against Leviathan.

After a brief fallout when Skitter's true intentions on joining the Undersiders were revealed, Tattletale eventually convinced Skitter to return to the group and for the Undersiders to accept her back.

They kidnapped Shadow Stalker and used her in an attempt to infiltrate the PRT ENE Headquarters. During the infiltration, they stole valuable information from the PRT.

The Undersiders were eventually charged by their benefactor to seize territorial control of most of Brockton Bay. They did so, and to the public, it looked like they did so in an alliance with The Travelers.

They fought against the Slaughterhouse Nine, and played a large part in driving them out of Brockton Bay.

A week after the Nine were driven out, the team met and decided to turn against Coil.[11]

Fought against multiple of Dragon's suits.

They actively began to pursue Coil after his attempt to kill Skitter and, after successfully killing him, seized control of all his assets. However, as a final act of spite, Coil released Echidna from her prison.

The Undersiders assaulted the PRT ENE Headquarters again in retaliation for the exposure of Skitter's civilian identity.

Skitter left the Undersiders and joined the Protectorate as Weaver on Dinah's advice to work toward preventing the world from ending. Weaver and Tattletale remained in contact through coded messages.[12]

When the group was invited to the Khonsu Meeting, Tattletale had Cauldron pick up Weaver

The Undersiders remained the uncontested rulers of the Brockton Bay underworld for close to two years.

During Behemoth's attack on New Delhi, Regent sacrificed himself, distracting Behemoth to save Weaver and Imp.

The Undersiders took part in the extermination of the Slaughterhouse Nine-Thousand.

Tattletale was the one to suggest that Panacea alter Oliver to look like Eden, which shattered Scion's will to fight.

After Gold Morning, Bitch, Foil and Parian, and Imp form their own individual groups, referred to by Imp as the Sons of Bitch, the Needlepoints, and the Heartbroken respectively.[13]

While the group effectively dissolved as a coherent entity but evolved into a larger alliance that let people help each other out.[14] Regardless they still decided to counter Teacher and his designs as he represented the largest single threat to the fragile peace.[15]

The former teenage villains succeeded in handicapping the much older and presumably more experienced Teacher.[16]

The former teenage villains succeeded in handicapping the much older and presumably more experienced Teacher.[17] They are seen as major players in the City, holding authority over the New Brockton area. They're known to be affiliated with the Heartbroken, and Tattletale recruited Chicken Little, a young parahuman with the power to control birds and a bud from Skitter's shard.

The Undersiders worked with Cradle's cluster group to attack the Mather's Fallen camp. Following the attack, Tattletale explained how she was using this opportunity to offer Cradle a chance at Goddess level power by exploiting Rain's cluster group.[18]

Bitch, Foil, Parian, and Snuff fought alongside The Shepherds as a first-wave attackers in Wardens' assault on Teacher's Compound.[19]

The team joined the assembly of capes within the Wardens HQ who were being briefed about the Titan threats.

The Undersiders and The Heartbroken were assigned in the same group as Breakthrough, The Major Malfunctions and Deathchester, and stationed in the ruins of Mathers compound between Titan Eve and Titan Oberon.[20] Later, they had to fight both of the titans,[21] and more.

The Undersiders, together with The Heartbroken, stood in the way of Titan Fortuna going to Earth Shin portal.[22] Evidently, they evacuated before thing went too dangerous.

Only Rachel Lindt and Foil deployed to the initial battle with The Simurgh, while everyone else stayed at the Wardens HQ.[24]

They were in the vicinity of the battle with The Simurgh and The Mathers Giant, and were dragged into it while attempting to protect Dinah Alcott.[25][26]

Art by Holocene from spacebattles

Art by everwander on deviantart 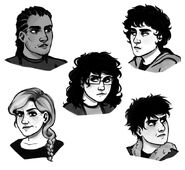 Art by Limited Anarchy on tumblr 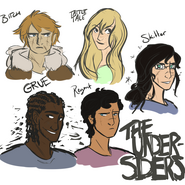 Art by Catie on tumblr 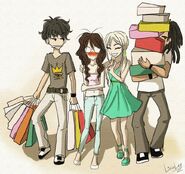 Art by icehipo on deviantart

Illustration by Shadaan on deviantart

Art by Drunkfu on deviantart

The Undersiders meet with the Fallen, the Teeth, and the Ambassadors. Art by Lonsheep 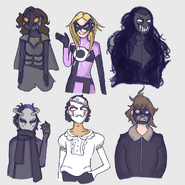 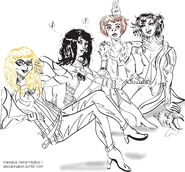 Created by a friend of Odd titan the 4th