The Triumvirate is a term that refers to the three remaining members of the original Protectorate team who are believed to be the greatest heroes in the United States, if not the world.

A fourth member of the Protectorate leadership, now deceased, was called Hero; the group became known as the Triumvirate after his death.[1]

To the public, the Triumvirate were already extraordinary people pushed to their limit and discovered incredible power that they used for the betterment of mankind.[2][3]

Members of the triumvirate are instrumental in turning aside threats such as the Endbringers.

With the death of Myrddin, the Triumvirate stepped down from their leadership positions.

Image by zhaomeng on DeviantArt. 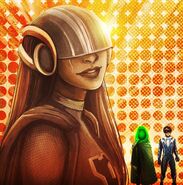 Image by Christoefour
Add a photo to this gallery

Retrieved from "https://worm.fandom.com/wiki/The_Triumvirate?oldid=49430"
Community content is available under CC-BY-SA unless otherwise noted.