The Simurgh (pronounced: "Si-morg") is an Endbringer.

The Simurgh appears as a fifteen-foot tall woman, waif-thin and unclothed. Her hair is almost as long as she is tall and is, like the rest of her form, platinum-white. She has a variety of asymmetrically and apparently randomly placed feathered wings, which appear excessively large compared to her body.[4] Parts of her are described as being "hollow", or made from carefully placed wings, which trace the outline of the absent body part. Her eyes are a solid gray, described by Krouse as seeming cold.

She wraps her three largest wings around her, ostensibly to preserve her modesty, although Krouse doubts, after coming close to her, that she has a sense of modesty at all.

The Simurgh continuously emits a psychic 'scream' - a type of psychic echolocation that allows her to scan her surroundings while exerting psychic pressure to alter behavior, implant messages, or create compulsions.[5] Her "hibernation" state in orbit allows her to make low-intensity scans of the planet with this sense.[6][5] To victims, it is usually perceived as a scream in the back of their minds, constantly changing in pitch and tone.[7] However, she was capable of keeping it inaudible.[8][5]

The Simurgh exhibits precognition, perfect awareness of the immediate future, and the more she sings/scans the further it reaches.[9][5] She sees the past in a similar manner, and can focus on a single target for faster information, but is blind to the present moment. The presence of other precognitives obscured possibilities from her sight, as did Eidolon and Scion, and certain other powers. She could see things that were otherwise obscured by looking at people's perceptions of them, or otherwise observing their consequences, as well as by predicting their most likely course.[6]

She uses these scans to make long-term predictions of behavior and activity (in the order of months and years) to turn human beings into rube-goldberg devices, with whole streams or strings of horrific events occurring in areas she's been active.[5] She can influence machines as well as people.[6][10] Her scan allows her to borrow and copy techniques and mental powers - including Tinker powers - and then telekinetically pull together a macro-scale version of their devices from the surrounding materials.[5] With enough knowledge of a subject, she can evoke memories subconsciously through her posture and actions. By placing a target in a stressful environment, this can be used to cause hallucinations.[6]

The Simurgh is also a powerful telekinetic capable of tossing buildings and flight.[5][11][7] She could strike a hundred targets simultaneously with thrown debris.[12] She could create "decoys" out of debris capable of fooling Scion.[7][13][14]Her telekinesis was seemingly Manton-limited,[8] but could still throw capes around by manipulating debris, cape-created material and costumes.[8][7] Like all Endbringers, she is immensely durable and strong.[5]

The Simurgh was the third Endbringer to appear, appearing just after the turn of the millennium. She first appeared in Lausanne, Switzerland in December 2002[15], and initially appeared benevolent and cooperative while psychically manipulating the people around her. Most residents of the Swiss capital, due to exposure to her mental manipulation, became violent and aggressive, attempting to kill as many people as they could and disrupt the world's resistance to the Endbringers as much as possible. This caused havoc throughout the country and the continent with wide ranging consequences. Lausanne's population was barricaded in and bombed. James Tagg was one of the people involved in that campaign.[16]

She attacked London on August 12th, 2003. It is unknown what the outcome of this event was.

The Simurgh was responsible for the corruption of Sphere, leading him to become the serial killer and Slaughterhouse Nine member known as Mannequin.[17]

She also attacked Madison, Wisconsin, in December 2009. Heroes won,[18] but as in previous attacks the aftermath necessitated the quarantine of the city. The Travelers were created as a by-product of this attack, which set the stage for multiple other events.

The Simurgh also attacked Canberra on February 24th, 2011; the event was a Scion no-show, but a Legend/Eidolon victory.[19] The aftermath of this attack necessitated the construction of a dome around the city.[20] This was a factor in Canary having a highly biased trial that sent her to the birdcage.[21]

The Travelers and the emergence of The Echidna performed their intended function, it is unknown if the resultant portal was planned. The revelation of Cauldron to the larger parahuman community and the subsequent schisms in The Protectorate was likely planned.

The Simurgh's use of the Travelers culminates in the near-assassination of Chevalier and Tattletale and the death of Accord by the expelled Traveler member Perdition at New Delhi. It is unknown whether the death of Behemoth was predicted, given Scion's and Eidolon's interference.

Was recruited by the Undersiders and the Guild into the effort against Zion. Her first mission was to fight off The Yàngbǎn.[24]

Later, after her sibling Leviathan was used to punish The Elite, she upgraded him.

It is unknown if the Simurgh was involved in the creation of Khepri. She was able to fake her destruction at Zion's hands and helped to break his mind.[25]

Apparently, tried to clone Eidolon only for it to be destroyed.[26]

She is recorded as being inactive for the two years since.[27]

Reports had it as her being active again,[28] her intentions were unknown.[29]

Post-Assault on the Time BubblesEdit

After Dauntless undergoes a broken trigger and merges with his shard, the Simurgh approaches the Kronos Titan and begins 'whispering to it'.[30].

Ziz abandoned her perch for a moment after the encounter with Chevalier.[31] But returned back after the threat had passed.[32]

Simurgh switched her nest from Kronos to Fortuna.[33] According to the Wardens' think-tank Simurgh scrambles Fortuna's communication.[34] Simurgh had managed to outplan the titan. Their duel was interrupted by the interference in The Shardspace.[35]

"She seemed human, but fifteen or so feet tall, waif-thin, and unclothed.  Her hair whipped around her, nearly as long as she was tall and platinum-white.  The most shocking part of it all was the wings; she had so many, asymmetrical and illogical in their arrangement, each with pristine white feathers.  The three largest wings folded around her protectively, far too large in proportion to her body, even with her height.  Other wings of varying size fanned out from the joints of others, from the wing tips, and from her spine.  Some seemed to be positioned to give the illusion of modesty, angled around her chest and pelvis." - Migration 17.1

"She turned to one side, and Krouse could make out her face.  Her features were delicate with high cheekbones.  Her eyes were gray from corner to corner.  And cold.  There was nothing he could point to, no particular feature or quality that could help him explain why or how, but seeing her face made it harder to ascribe any kind of human quality to her. If he’d been thinking she had a sense of modesty before, he didn’t now." - Migration 17.1

Image by DamienDraidecht on DeviantArt. 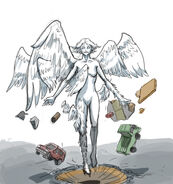 Image by Beru-bera on DeviantArt. 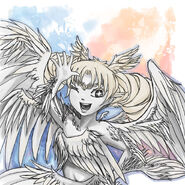 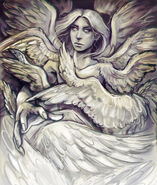 S-Class Threats by BenswFrenefits
Add a photo to this gallery

Retrieved from "https://worm.fandom.com/wiki/The_Simurgh?oldid=54885"
Community content is available under CC-BY-SA unless otherwise noted.