Kurt Wynn, known publicly, if at all, as The Number Man is a Thinker with the power to understand numbers and probabilities.

He was irritated when his banking business lost customers.[1] He was more willing to interfere with organizations that didn't use his banking services.[2]

He disliked the endless white of the Cauldron Compound and went to some lengths to decorate his office.[3] His office had no chairs because he believed sitting would leave him too vulnerable.[4] This may have involved the health risks as well.

His participation in Cauldron's experiments gave him a great deal of knowledge regarding how powers and agents worked.[3] He knew how to use the "EM readers" Cauldron used for brain scans to determine if someone had had a second trigger.

He saw morality as a useful delusion perpetrated by society.[5] Nevertheless, he disliked violence.[6] He believed that he worked to save lives, and only ever killed out of kindness.[7] Number Man saw friendship as a sort of shared delusion, but nonetheless saw Jack Slash as a friend of sorts, as well as his polar opposite.[7] He was also interested in fashion and money as constructs of society.[3]

He seems to hate a small handful of things. The concept of zero and unnecessarity. Related, has a noted his distaste for the Harbinger clones . Bonesaw based their personalities according to word of mouth and rumors of his ruthlessness under that are attached to his abandoned alias, rather than acting more in line with his actual personality.[8] Thinks in imperial measurements. [9]

Number Man was known as the "supervillain banker".[10] Despite his immense influence, he was relatively little-known.[11] Major villain groups turn to him for help hiding and manipulating their finances, a job he has performed for them adequately for decades.

Once he began operating in the field for Cauldron, he became known as one of the "bogeymen" alongside Contessa.[12]

Harbinger's power was never revealed, unknown to the public. It was believed to be some kind of hyper-awareness of space and the movements of his body, most effective at close range.[13]

Number Man purposefully dresses as normal as possible. He wears a button-down shirt and thin-rimmed glasses. He is clean-shaven and keeps his blond hair cut short. He considers himself "bland" and appears to be a bookish, middle-aged man.[14] He sometimes wore a suit with a pocket protector, and carried pens with him.[15]

As Harbinger, he wore a flowing cloak with a hood, and a snarling, fanged mask with glowing dots in the eye-sockets.[16]

Number Man's ability makes him "good with numbers" to a ridiculous degree. He perceived his power as elaborate mathematical notation, as if written in the air.[17]

His power allowed him to understand and manipulate the world economy in immense detail.[3] He could also use it to predict the likely casualties of various End of the World scenarios.[11][18] He could potentially identify abstract targets, cultural and economic, to push the world toward collapse.[19]

His power allowed him to analyse architecture, letting him design buildings, predict collapses,[20] and conduct controlled demolitions.[21] Doctor Mother claimed that he was able to calculate the odds of success for a given Cauldron vial, but this was a lie.[22] Tattletale believed that he would be able to break Dragon's time-lock encryption.[23]

He could perceive the Custodian's presence and the edges of Doormaker portals.[24] He was able to fight even with his sight blocked by bugs.[20] He was able to target Night Hag and Nyx despite their powers.[12] He was able to detect Taylor's bugs and identify people hiding among her swarm-clones.[25]

His ability helped him to survive falls,[13] but he was still somewhat worried by them.[26]

He could climb building-faces as fast as he could run on horizontal terrain, using his power to find handholds and footholds.[13] He climbed down a ladder so fast he almost seemed to be falling.[25]

His power was formidable in combat. He can analyse and predict an opponent during combat, allowing him to dodge their attacks by extremely narrow margins[13][27] once he understands their power.[3] He claimed that he could see the stress points of his opponent, allowing him to shatter bones.[28] He could hold Lung and Bitch's Dogs in holds that didn't allow their muscles any leverage.[29] He could judo-throw Dragon's Teeth officers in full power-armour.[13] However, he wasn't quite as good in a brawl as Contessa.[30]

His power is more effective based on how much he can take in before engaging. Therefore it's better at range than in a melee fight.[31] He could ricochet bullets to knock the knife out of Imp's hand when she held it to Doctor Mother's throat,[20] and to target Rime regardless of cover and her attempts to dodge.[25] A clone of him was able to disable one of Bitch's dogs by throwing something at it.[32] He was able to track Scion's location for String Theory.[33] His power enabled a clone of him to dodge Foil's attacks, despite her superhuman sense of trajectories and timing. He could also anticipate and avoid Golem's smallest, fastest hands, as well as Revel's programmed orbs.[13]

His power allows him to use use almost anything as a weapon. He has been seen using his pens in combat,[15][28] as well as firearms. Using a small pistol he would fire from the hip;[20] on at least one occasion he made use of a sniper rifle.[25]

He was often seen with a laptop.[22][3] His office contained a number of touchscreen computers hooked up to a Doormaker portal, providing him with info from around the world.[3]

Kurt was a founding member[34] of the Slaughterhouse Nine under King, who chose the first cape name for the boy.[35] As Harbinger, he would fight alongside Jacob.

Kurt and Jacob killed King in 1987, they were both around twelve at the time,[36] opening the way for Jacob to reshape the King's group to his purposes.[3] Kurt would leave the group and take up a new cape name that aligned with Jack Slash's paradigms concerning such.

At some point Kurt disabled Andrew Richter's "Robin Hood" program, which had been stealing money and funneling it to the Dragonslayers.[38]

Coil created accounts with The Number Man for each of the Undersiders.[10] He managed these accounts so that they grew "in alternating stutters and huge bounds".[39]

Kurt lost a number of clients thanks to the revelation that The Number Man worked with Cauldron, including Tattletale.[1]

He met with Accord to sell him vials and discuss happenings in Brockton Bay.[40]

Cauldron sent him back into the field.[6] He helped to break Pretender out of Protectorate custody, going up against a team that included Weaver.[25]

Bonesaw created ten teenage clones of him as part of the Slaughterhouse 9000.[34]

Along with Contessa, Kurt helped defeat a group of the Slaughterhouse 9000 when they were overwhelming the heroes.[12] Hours later there were only eight clones of him; all of them were with Jack Slash's group, were seen.[41] He fought them along with Contessa; she killed three of them, and the other five surrendered and joined Cauldron.[27]

He attended a meeting of all the major players as part of Cauldron following Scion's betrayal.[18]

At some point during or shortly after Gold Morning, he was made aware of the existence of Eden.[21]

During the Irregulars' attack on Cauldron, Number Man talked to Contessa over the phone.[42] He and his clones helped protect Doctor Mother.[20] Following her death, he helped set up the demolition that brought the Cauldron Compound down on Scion.[21]

He became part of Khepri's swarm and was instrumental in calculating the likelihood of attacks hitting Scion.[43]

He survived the event, as did several of his 'siblings'.

He and his wife were working well together.

Kurt continued his practice of global economical manipulations. Dominant currency of Gimel.US, trading dollars, is stabilized with his efforts.[44]

He was present during arrest of Cradle.[45]

Kurt attended the assembly of the second assault team deploying against Teacher.[46]

He and Jeanne were caught in a car bombing, blamed on anti-parahuman faction.[47] He, presumably, died.[48]

Harbinger by Apfii on DeviantArt
Add a photo to this gallery 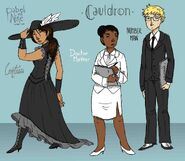 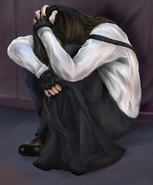 Illustration by CPericardium on deviantArt
Add a photo to this gallery

Retrieved from "https://worm.fandom.com/wiki/The_Number_Man?oldid=56784"
Community content is available under CC-BY-SA unless otherwise noted.