Worm Wiki
Register
Don't have an account?
Sign In
Advertisement
in: Articles in need of completion, Groups and Organizations, Heroes, The Major Malfunctions

The Major Malfunctions are a team of young heroes allied with Breakthrough. They later officially became known as The Majors.

The Malfunctions were a highly informal grouping. They lacked a natural grasp of basic cape politics, and were unaware of many details about powers.[1][2] Before Gold Morning, the Malfunctions rotated between several towns in the Midwest, though they had little success in finding villains and remained inexperienced. After Gold Morning, they were fine just operating on the fringes.[3]

The Malfunctions were mainly just a group of friends, without any clear structure; it is unknown how they function in combat together.

The PRT tried to talk to them or even try to recruit the team, but nothing ever came of it, due to their fear that they would be broken up.[4]

All of the Malfunctions triggered as kids, and got in touch online to form a team, dropping out of school to be heroes.[5][6] Prior to Gold Morning, the Major Malfunctions mainly wandered between three small towns in North Dakota, but had no luck finding any villains. By Gold Morning they had been operating for four years. Nevertheless, against the odds, they stayed together as a hero team.[6]

The Malfunctions eventually settled in a tent city, where other teams hadn't claimed jurisdiction, but remained disconnected from other teams and continued to be largely inactive as a hero team.[3] With a referral from the Super Magic Dream Parade, the Major Malfunctions became part of the growing hero collaboration network spearheaded by Breakthrough.[6] Antares met with them and assigned them to keep an eye on one of the suspects at the prison.[7][8]

The Malfunctions later began their stakeout, with some supervision from Fume Hood. Some shenanigans apparently occurred when they realized that they hadn't brought food, but the situation eventually was resolved.[9]

Later they called in about developments and were visited by Goddess-aligned Antares and Byron Vera. Their second target, prison pharmacist, was meeting with Teacher's agents. Heroes tried to inform Wardens, but ran into communication interference and had to fight through Teacher's thralls in attempt to capture the pharmacist by themselves.[10]

Although Caryatid sustained some burns and the pharmacist escaped, they successfully disabled and apprehended numerous Teacher's agents thank to Finale.[11]

The Malfunctions together with Fume Hood accompanied Breakthrough on their investigation of the Navigators' ambush. In subsequent ambush Withdrawal and Caryatid were wounded.[12]

Withdrawal, Caryatid, and Fume Hood were helping during The Wardens attempt to stop March from reaching Brockton Bay time-bubbles. Withdrawal and Caryatid were almost killed by March.[13][14]

Malfunctions were left out of anti-Teacher operations by their own desire.[15] However, once the first Wardens' attack disappeared, the older members of the team joined Breakthrough in the second assault on Teacher's Compound.[16]

Withdrawal started considering Fume Hood a part of the team.[17]

They were stationed on the Cheit-Gimel border alongside five other capes from the team Towline.[18] Which placed them right in the way of Contessa.

They were assigned in the same group as Breakthrough, The Undersiders and Deathchester, and stationed in the ruin of Mathers compound between Titan Eve and Titan Oberon.[19] Later, when the titans had to be distracted from each other, Malfunctions took on themselves to protect Lookout, while she made her scans, and shortly evacuated with her.[20]

The Major Malfunctions joined The Wardens' assault on The Simurgh.[21]

After the events of the second apocalypse, the team gained a new member in Harbinger V.[22]

They were invited to Vista's 18th birthday party.[23] 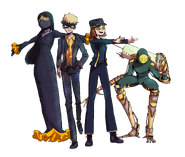 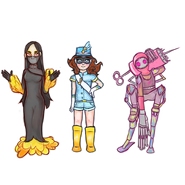