Norfair span of the City

Daybreak 1.2
Tempera was a hero who joined a nascent team operating in the Norfair span.

Crystalclear described her as being a skilled cape who "needed" to go out in costume.[1]

She sometimes helped with construction, half-joking that she liked getting her hands dirty.[2] She may just dislike inaction.

She was the member of her team who seemed to understand Longscratch the best,[3] and Victoria judged that she was very in tune with her team.[4] She further believes that Tempera could have been a major hero keeping a large team together.[5]

This quality was seemingly recognized by other Parahuman leadership.[6]

She was briefly the leader of the Norfair Neighborhood Heroes, a group that consisted of herself, Fume Hood, Longscratch, and Crystalclear, based in the Norfair span of the City.

Tempera was the one who suggested to Longscratch that he should join the team[1] and seemed to have a better grasp of his psychology.[3] She likely worked with him before.

Tempera is muscular with short-cut hair. Her eyes are pure black, with no whites,[7] and her skin is light brown.[2]

In costume, she wears overalls, and has what looked like thick paint forming a "mask" around her eyes and covering her arms to the elbows. The paint is mostly white, but around the edges it was black and noticeably thinner than the rest.[7] She sometimes varies the design of her painted-on "mask". On one occasion, it resembled a bunch of vertical stripes painted on with her fingers, each bleeding into the next.[8]

Tempera generates a paint-like substance from her body, primarily her hands, and in large quantities if she needs to. This 'paint' has a variety of applications and can be controlled after it is deposited.[9] These applications included hardening, which can be used to seal up a door.[10] It can be used to trap opponents; if an enemy is strong enough to shatter it, it can harden and be broken and harden again.[11]

She seemed to leave paint on things she touched even if she didn't want to, but her ability to control the substance made cleaning it up easy.[12]

Her full history is unknown, but she was more familiar with Fenrir's Chosen and the clans than Empire Eighty-Eight so she may have begun operating after The Timeskip.[13]

Was just as instrumental in ending the event as any other run of the mill parahuman.

She invited Longscratch to join a team that was forming.[1]

She was present at the Norfair Neighborhood Heroes aborted debut, helping to fight off the team of mercenaries who attacked. They were allegedly there to abduct her teammate Fume Hood but Tempera was having none of it. She acquitted herself well against the group.

After the team dissolved, she was offered a place in the Attendant, but decided to reserve judgement until she could see the effects of their merger with the Shepherds.[14] The Wardens helped the group get in contact with her, and she got the impression they were pushing her to join a team.[6]

She later got a call from Victoria about a boy, Sam, who said his friend Hunter had had a trigger and needed help.[12] Tempera went back to the hospital to collect Sam and drop him off with the Wardens, before heading off-world to deal with a situation that could lead to war.[15]

Her team prevented sabotage of G-N portal station.[16] She later attended hero rally alongside Fume Hood,[17] she met Victoria and her new team there and had an amicable conversation.[18]

Tempera was present during The Wardens attempt to stop March from reaching Brockton Bay time-bubbles. She managed to save the wounded Withdrawal, but was left by March to die herself.[19][20] 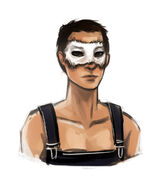 Doodle by Scarianna on Discord