Insinuation 2.6 (Mentioned)
Hive 5.1
Spitfire is a member of Faultline’s Crew.

Labyrinth remarks that she is not amoral, as she is careful to make sure she does not hit those who are vulnerable to her fire.[2] Tattletale says that Spitfire was too kind to have been visited as Burnscar's pick for a prospective member of the Slaughterhouse Nine.[3]

She seems to like Gregor. Her side of her and Labyrinth's shared bedroom in Palanquin is cluttered, filled with magazines, posters, and pictures as well as a bookshelf and an Apple computer and speaker systems that she uses to play CDs.[4]

She rooms with Labyrinth and seems to be her minder while they are on missions.[5]

Spitfire wears a concealing, red and black[6] fireproof suit[7] and a modified gas mask with reflective lenses and a nozzle at the base.[8] Under her costume, she has dense freckles on her face and hands and curly brown hair.[4]

Spitfire has the ability to spew geysers of a napalm-like liquid chemical from her mouth that ignites on contact with air, creating intense flame that can melt concrete,[9] stone,[10] and steel beams.[11]

She had grown proficient with its use.[10]

Shortly after Spitfire triggered, the Undersiders attempted to take her on as a member, either at her application[12] or of their own volition,[9] but she was scared off by an altercation with Bitch[9][13] and Faultline's Crew recruited her instead.

Spitfire attended the meeting at Somer's Rock to decide what would be done about the ABB.[6] She helped Gregor the Snail, Skitter, and Grue to burn down a tenement building housing ABB soldiers.

She accompanied her team when they crashed a Merchants drug party and attempted to fight back when Burnscar attacked Palanquin.[14]

She failed to defend her home against burnscar.[7]

Spitfire was with the rest of the crew when they infiltrated Madison, and when Contessa attacked the crew at their hotel there, she was injured badly enough to need a tracheotomy, which she survived. She also attended the battle against Echidna along with the rest of her crew at Tattletale's request for Labyrinth.[15]

She was seen with the crew during the meeting after Gold Morning began. 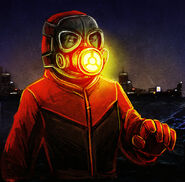 Retrieved from "https://worm.fandom.com/wiki/Spitfire?oldid=54701"
Community content is available under CC-BY-SA unless otherwise noted.