Jonathan Seiter[4], known publicly as Snag, is a member of the Mall Cluster, a new cape trying to act like a old time villain in a new age.

Nursery described him as "not as scary as you pretend to be ... just a man who's dressing up".[3] Also that he has a rookie mindset with good instincts. He's mean, unkind, impatient, emotional.

His normal speaking voice is a deep growl.

As with his clustermates, his original personality is warped. This is due to the bleed-through effects from the tokens they pass around. Cradle had made a concerted effort to pass his sociopathy to Snag, making him much more cold blooded and ruthless.[5] Upon his death, Cradles influence over Snag stopped and Snag saw the error of his ways for the first time.[6]

Was in a group with Lord of Loss, Blindside, Nursery, and Kingdom Come. Was able to convince them to assist in fighting the Fallen.

Professional and gets along with him.

Had a productive collaboration.

Snag was heavyset, 250-300 pounds and less than six feet tall. He had long black hair and a thick beard.[7] He speaks with a raspy voice[8] generally lowered in a growl;[9] evidence of persistent damage from smoke inhalation.[10]

Before his trigger he was much heaver then he is now.[1] Even then he had lost weight due to eating and similar.

He wears what appear to be long-fingered gauntlets, and features mechanical arms long enough that his wrists can brush the ground.[8]

By way of a costume, he wears metal work boots and a long coat that drapes down to his ankles,[8] with sleeves modified to reach almost to the floor. His face is covered by a crude mask made of what looks like black clay or melted rubber, covering the skin not concealed by his hair and beard. His eyes had dark circles under them that blended into the material of his mask.[3] This gives him the appearance of a neanderthal brow with a permanent glare.[3]

Snag is a grab-bag cape.[11] His main power is mover, but he is also quite proficient tinker, that can apply emotion-affecting states from his gadgets,[11] and striker.

He can treat any direction as 'down'[12], that allowed him to leap without jumping movement,[8][2] land on a ceiling[13] or on a wall.[14] In open spaces Snag was capable of pseudo-flight, although he had to be careful about velocity.[15]

Snag's Tinker ability manifested in a way that allowed him to create large gauntlets that fit over his arms.

His Tinker ability comes as a courtesy of Grasping Self.

He can force negative emotions on people he touches with his gauntlets,[3][2] or apply dedicated emotions from his tinkered projectiles.

His emotional attack is accompanied by a mechanical humming from his gauntlets as it charges, but Victoria believed it was likely part of "a full-fledged emotion affecting ability".[2]

His emotion ability comes as a courtesy from Anguished Heart.

He could use his variant of a specific blaster power to easily punch through walls,[3][18] and other inorganic materials. This was his version of Rain's primary ability.

His power waxed and waned over set intervals.[19] When he fought with Victoria he was near his peak.[20]

The Cluster he was a part of had a unique setup, where they would be forced into a dream room every night. Here they could exchange tokens that represented their individual primary abilities.

Jonathan lost his parents early, and was deeply attached to his brother. He worked in a factory before he got blamed for a supervisor's screw up and was tossed out.

He survived the end of the world, although his brother was obliterated simultaneously with parts of New York City.

Jonathan moved to Gimel and opened comics and games shop there. It reminded Jonathan of his deceased brother, who had owned a similar store, and provided a degree of hope and stability to him.[21]

Jonathan triggered as part of a cluster during a terrorist attack on a mall by the Fallen. He watched his store burn, and failed in saving a young girl.

Participated in the Norfair Community Center Attack, and proved to be intimidating opponent.

He was looking to hire people for a project, presumably to find the rest of his multi-trigger group. He wants to do test runs to ensure he succeeds on the first try. He has hired Tattletale as an information broker for the job. [17]

Instead of outright dying, he is dragged into some sort of shard death state. 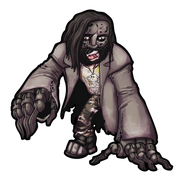 Art by Scarfgirl
Add a photo to this gallery

Retrieved from "https://worm.fandom.com/wiki/Snag?oldid=55516"
Community content is available under CC-BY-SA unless otherwise noted.