Sidepiece is a villainess trying to grab her own bit in a world post-calamity.

Sidepiece is chronically unserious, immature and crude. She prefers to think about it as a defiance in the face of the world, but for bystanders it mostly comes off as obnoxious.

She continually uses horrible catch phrases that satirize her powers weaponization of herself. Furthermore, her way of speaking comes across as some twenty-somethings bad attempt to sound like a teenager.[1] Among friends she can be generally amiable and could get along with others.[2] She finds heroes annoying, and prefers to just blow stuff up to complete her bingo sheet. (She has an organ explosion bingo sheet.)[3]

There is no anesthetizing effects in her power, which can be somewhat incapacitating to Sidepiece.[4] This, however, does not stop her from enthusiastically running into any fray.[5]

The two were long-term sweethearts, and one of the most serious relationships Sidepiece has ever had. Though Sidepiece is unsure, that DJ can keep up with her long term.[9] He does call her on her puns and refusal to admit her faults,[7] they are openly affectionate with each other.

Despite initial reluctance on his part,[7] she was able to convince him to let her carry pieces of him along with her when he was recovering.[10]

She became friendly with Ashley when she was infiltrating the villains at Hollow Point, hitting it off during the Assault on the Fallen Compound.[2] Sidepiece somewhat admires Swansong, though she still thinks of her as Damsel, and considers her friend material, but only after getting her off of her high horse.[11]

As an example, she will compliment her and insult her within the same conversation.[12] Regardless Sidepiece did incorporate makeup tips she saw Ashley use.[13]

Prolly safe to assume that her relationship transferred to the last Damsel standing.[14]

She was generally antagonistic towards the members of Breakthrough. Sidepiece referred to Tress as a cyborg when she's clearly not a cyborg, along with targeted criticisms of Lookout for being a orwellian voyeur and Precipice to being a repentant murderer. [15] She does not shy from going for the jugular when Mockument's power publicly reveals ungainly sides of Antares either.[16] In short she is terrible to everyone.

Sidepiece wears a crude 'phantom of the opera' type mask, with hair covering the other side of her face. She wears black eye makeup.[17] She kept to this aesthetic even when she received an updated skull like mask that covered her face from the mouth up.[13] What really draws one's attention is the commonly gaping wounds of her torso, which are unusually thin.[2] She wears a top that borders on indecent, and everything in her stomach region tends to be ripped open, in a zombie-like fashion.[18]

If this is all ignored she is not unattractive.

She can tear any piece of her midsection off[19] and use it as a destructive projectile.[18] Her 'ammo' is dependent on the amount she can tear from her stomach and how quickly she can tear the tissue away.[20] Anything in her lower torso is fair game, bones, skins, organs, everything. Regeneration rates and effects are dependent on the tissue type, they no not seem to follow the law of conversion of mass as when they detonate there is far more of an explosion then there is any reason to be giving the starting material.[21]

On an extra note, any material that is knocked off of other people by an explosive effect of one of her organs is set on fire, in a similar way to the parts that came from her.[21]

Sidepiece also has slightly enhanced strength from her elbows down, making tearing her own flesh easy.[27] it also helps her with her throwing, which she is very experienced with.[21] Tearing organs off aren't enough to prime them for detonation she needs to activate them and then throw the individual organ.[4] She has removed several organs to make a pile for later use, though they later set off.[7]

With her consistently concave midsection she can store items without interrupting her profile.[28]

Presumably a natural trigger. Had a history of drug use, drug selling, and murder.[26] Also a very active sex life but only assholes would mention that.[29]

Sidepiece settled in Hollow Point as part of Beast of Burden's "hurter" faction. She participated in the raid on the Fallen compound.

When Beast of Burden attacked Damsel of Distress for up staging him Sidepiece tried to defend Damsel right before the black clad villainess killed BoB.[30] SP's main concern was that she had not been monetarily remunerated before he was killed.[31]

With BoB dead Sidepiece joined up with Love Lost's group.

When Breakthrough infiltrated the Lyme Center to apprehend Love Lost's gang, Sidepiece and Disjoint showed up as reinforcement, but were captured by Shortcut and Spright of Advance Guard.[32] They were interrogated, but were not imprisoned due to a lack of prison space.[33]

She and Disjoint spied on Breakthrough's meeting with the Undersiders, had a run-in with the patrol block, and reported back to Love Lost. Sidepiece remained suspicious of Cradle.[34]

During the ambush on a combined Breakthrough/Undersider group she was paralyzed by Juliette Vasil and shoved into flames from her own projectile by Darlene Vasil.[35]

She was not captured and ran off alongside Nailbiter and DJ.

Sidepiece re-appeared as part of Damsel of Distress' new gang.[36] She had a good time during the fight with Breakthrough and The Huntsmen.[37]

She accompanied Damsel to the Breakthrough HQ, but ran away when Defiant showed up.[38]

Sidepiece participated in the Wardens' battles against The Simurgh and Machine Army alongside Deathchester.[39] 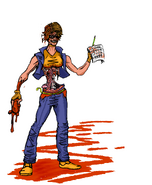