Interlude 11e
Shatterbird is a member of the Slaughterhouse Nine.

Shatterbird considers herself a scholar, and claimed to be "the Nine’s primary recruiter," and to "have an eye for people who can thrive among us".[1] She gets along with other monsters very well.[2][3] Alec describes her as being a control freak having a great deal of pride.[4]

Jack Slash described her as pretending to be civil but growing restless when things got quiet. He also noted that she was very prideful, with her driving motivation being appearing powerful and respected by those around her, while the threat of physical harm or embarrassment held her back.[5]

Shatterbird enjoyed the long-lasting psychological effects that her city-wide attacks had on her victims and their loved ones.[6]

According to Witness's deductions, Shatterbird harbored romantic feelings toward Jack, but never acted on them and justified herself with excuses.[6]

She hated Cherish for having nominated herself to the Nine.[7][8]

Shatterbird is Middle Eastern in appearance.

She wore a helmet of colored glass shards that covered the top part of her face, a flowing garment of colored shards on her body, and a beaked glass mask.[6][9] Her costume was real, not held together with her power,[10] although it could serve as a source of glass in a pinch.[11]

She carried a gun beneath her dress for times her power was nullified.[10]

Shatterbird was a silica kinetic, having the ability to manipulate silicon through high-frequency sounds, giving her essentially perfect control over all glass, sand, and other siliceous compounds within multiple city blocks of her location. Often, she would use this ability to make every piece of glass in a city explode violently to announce the arrival of the Slaughterhouse Nine.[9][12][13] She was able to achieve this much range because her power was transmitted and re-transmitted through the glass in a cascade effect.[14]

Shatterbird had finer control of glass that was closer to her. She leveraged this ability to create projectile weapons or targeted storms of glass, fashion makeshift shields, and fly by controlling the glass in her costume.[10][15][16] She could even use her power to shore up injuries with "constructs" made out of glass.[17][18] Her range for these fine-tuned abilities was longer than Cherish's offensive range;[8] Tattletale speculated that her fine movements were boosted by the presence of small pieces of glass, like those scattered all over the city when she announced her presence.[14]

According to the Missing Interlude, she could hear sand, allowing her to detect people digging. She claimed that this was why she left Dubai.[6]

Shatterbird's flying speed was lower than the speeds Siberian and Crawler could run at.[15]Her power was subject to the Manton Effect, and couldn't affect plants.[19] Shatterbird's power was reliant on ultrasonic frequencies generated by her and the glass she controlled. This made her vulnerable to powers that could cancel out that frequency[10] and soundproofing.[14][15]

Bonesaw also modified members of the Nine with various "safeguards"; sheathing their vital organs and major arteries in a protective sub dermal mesh, further wire reinforcement was put into the skeleton to avoid broken bones,[20] with special attention was paid to the organs and spine to keep them functioning.[21] She also rendered her teammates resistant to her pathogens,[21] and granting them artificial neurons which allowed them to make plans Cherish could not see, it is unknown if this could be adapted for other Master powers.[22]

Shatterbird was born in the United Arab Emirates and was unknowingly dosed with a Cauldron formula, prompting the manifestation of her powers and the deaths of thousands. She eventually made her way to London, then America, joining the Slaughterhouse Nine.[23]

Shatterbird's induction into the Slaughterhouse Nine was the last time more than one of its "candidates" survived the Nine's tests previously to their arrival in Brockton Bay, and she presumably won her place in the Nine by killing the other candidate(s).[5]

She would gain a reputation as the recruiter for the Slaughterhouse Nine, directly recruiting Burnscar when the young pyrokinetic was on one of her sprees.[24]

Shatterbird came to Brockton Bay with the rest of the Nine and devastated the city with her power. Her candidate for membership was Hookwolf, whom she convinced to agree by threatening his Chosen.[10]

She was defeated and captured by an alliance of the The Undersiders and The Travelers. Regent then used his Master abilities to control her body and by extension her power.[15]

Shatterbird became a fixture of the Undersiders strategies for the weeks since her capture. She was only able to use minute amounts of free will during this period.

Shatterbird was killed during the Battle against Echidna. Originally freed by some of Echidna's clones when a Vizier tried to control her she killed it and turned her scream on her liberator. Tattletale collapsed her stolen base around Echidna, with Shatterbird caught in the collapse. She was able to get off one last damaging scream.

Trapped in the base, she encountered the freed Vista, who used her own powers to collapse the debris further and crush Shatterbird.[25]

She was listed as missing and assumed deceased.

Several clones of Shatterbird were made and used as part of the The Slaughterhouse Nine-Thousand. They are all presumed to be dead.

Illustration by Pabel and Nine on Tumblr

Illustration by RespicePostTe on DeviantArt

Illustration by Ridtom on DeviantArt

Illustration by Ridtom on DeviantArt 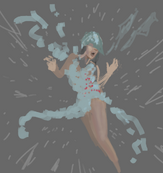 Illustration by evilhamster13 on DeviantArt

Illustration by CPericardium on DeviantArt

Illustration by Scarfgirl on DeviantArt

Illustration by abyranss on Tumblr 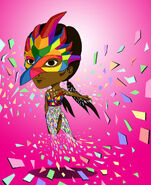 Illustration by Chianina on DeviantArt