Insinuation 2.7 (mentioned)
Shadow Stalker is a member of the Brockton Bay Wards.

Sophia is a mean-spirited, hot-tempered and violent teenager who finds anything but negative consequences as encouragement to continue.[5] She has nothing but disdain for those she perceives as weak and hates anyone she can't beat in a fight. When Taylor was revealed to be Skitter, Sophia was enraged and later tried to convince herself that she was responsible for what Taylor became. Surprisingly, she admitted to Taylor that she was resentful that Taylor had a parent who actually cared for her enough to actually attend the meeting.

A lot of her personality comes from the influence of her shard, as noted by Taylor.[6]

Friends who enabled each other.

Her 'prey' who turns out to be a predator much to Sophia's surprise.

Sophia was dark-skinned, slender, with long, straight hair[9]. She was athletic,[1] owing to her membership on the track and field team[10] and likely her nighttime activities in the city.[11] Weld described her as pretty.[1] Her eyes were brown. She was about as tall as Taylor.[12]

As Shadow Stalker,[13] Sophia wears a heavy black cloak and skintight black bodysuit with black-painted metal kneepads, gauntlets,[9] belts and pockets.[14] Before joining the Brockton Bay Wards, her mask was a modified hockey mask.[9][15][2] After joining the Wards, her mask was made of black-painted metal[2][12] and took the shape of a woman's face with a stern expression,[15] leaving her brown eyes visible behind it.[12][16] Her costume included a "voluminous" cloak[1][17] in dark gray urban-camouflage, with a hood.[12] She carried two crossbows, and had tranquiliser cartriges for them mounted on the forearm of her costume,[2] with some razor-sharp bolts concealed between her shoulderblades, underneath her cloak.[18] She also carried two small knives.[19]

In her Breaker state, she was described as wispy[20] and transparent, as if she was composed of gas.[1] She was described as nearly invisible,[20] a gray shadow among other shadows,[18] and had a distorted, skull-like face hidden by her mask.[21] However, meeting her in daylight, Taylor described her only as "a little smoky, like she was made of sand and not anything solid."[12]

Sophia was capable of shifting herself into a "shadow state" which allowed her to pass through walls and made her lightweight. She could pass on these attributes onto her equipment, including shots fired by her crossbow bolts.[2] It was unknown exactly what her upper limit was. For example, while she was able to 'shadow' a fold-up chair and launch it through a wall where it would materialize as a projectile, it was unknown just how much effort this cost her.[22]

As Shadow Stalker, Sophia carried two crossbows with both lethal and nonlethal bolts.

She is greatly vulnerable to electricity in her breaker state, even with strong static shocks being transferred into sufficient injuries.[23] As a Ward, she had lenses built into her mask that could fold down over her eyes, designed to detect electricity.[18]

If she "stalled" inside a solid object, she lost forward momentum and suffered excruciating pain. She also suffered as badly as anyone from pepper spray or other aerosols if she changed back while they were still inside her, if not worse.[18]

Her power could be used to phase a bolt or other weapon into a target, then unphase it inside of them to bypass armor, though this is noted to leave a characteristic imprint in the victim.[18]

Her power had a negative interaction with Grue's darkness, making it difficult to breathe in her shadow state, forcing her into a middle ground where she was slower and found it draining and painful to re-form after objects passed through her.[18]

Once a cape with a vigilante bent, Shadow Stalker was caught after having nearly killed a man, pinning him to a wall with her crossbow bolts. When given the option, she chose to join the Wards as a probationary member rather than be sent to juvenile detention. As a condition of her parole, she was given probationary status in the Wards and required to use nonlethal ammunition, a requirement she usually ignored when the Wards weren't looking.

She fought Behemoth in the attack prior to the Battle against Leviathan, although she mostly did search and rescue,[22] presumably alongside the Wards.

In her civilian guise, she was Emma's best friend and one of Taylor’s tormentors, as well as a member of the high school's track and field team. She wasn't liked by many, beyond Emma and Madison, as she was fairly notorious for being mean spirited. Her brand of bullying tended more towards the physical than any of the other girls – tripping, punching, kicking, shoving, and so on; likely being the one who pushed taylor into the locker.[25] She told Emma that her friend would be allowed into the Trio if she "laughed more at the pranks and jokes, stood a little straighter instead of cringing like a whipped dog".[26]

Sophia helped to bully Taylor as a member of the Trio. She helped Madison pour juice on Taylor, laughing "like it was the funniest thing in the world".[10]

During the curfew necessitated by the ABB's rampage, she was stationed at a shopping mall along with Battery. After seeing the concussed Taylor shove Emma unprovoked, she put her bullying victim in zip-ties and admonished the teen's father to keep a hold on his daughter.

Emma's father called the meeting despite the mountain of evidence that was against her, Sophia's position in the Ward's protected her from severe punishment.[27]

After catching sight of Taylor Hebert kiss her seeming boyfriend, Sophia stalked her to a bookstore and violently confronted her. She was then stopped by "the boyfriend" and fled.[28]

Sophia harassed her teammate Vista on the Brockton Bay Wards. Later, her teammate Flechette was shocked by her brutality on patrol. [2] When Sophia was captured by supervillain team The Undersiders, she was used as a puppet by their member, Regent. After forcing her to fight her own teammates, Regent sent evidence of Sophia's bullying to the police, and revealed her secret identity to her family.

She was accused of violating her probation shortly after Arc 10 and was sent to juvenile detention.[7] When Skitter was revealed to be Taylor, Sophia could only scream in blind rage and shatter the TV.[29]

She was freed and joined Taylor's group hunting down villains for a time after Gold Morning. She was successfully used as bait to message to the Simurgh due to her particularly active shard. During the voyage in the Firefly, she was consistently a voice of dissent in the group, going so far as getting into a fight with Lung.

She fought in the Cauldron siege, killing multiple Case 53's. When Zion visited the base, she retreated using her power and was picked up afterward.[30]

Sophia was spotted stalking Imp from the rooftop of a nearby building hunting some of The Heartbroken. Imp confronted her, and Sophia, upon seeing Imp's badge honouring the Gold Morning, gets irritated by it by claiming the victory wasn't earned due to everyone being controlled and "used", as well as trying to deny that it was Taylor's power that did it all. Imp correctly guesses, however, that Sophia is irritated by the badge because she knows deep down, no matter how hard she tries, she will never make a bigger impact than or be remembered like Taylor. Imp comments that Sophia will be reminded of this every time she sees the badge on someone, and then leaves her to stew in her anger.[31]

Shadow Stalker in the Wards by Lonsheep 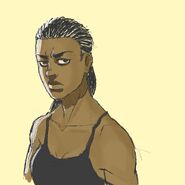 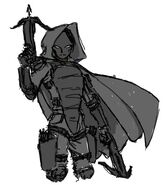 Illustration by crashLegacy on deviantart

Cite error: <ref> tag defined in <references> has group attribute "" which does not appear in prior text.