This article contains MAJOR SPOILERS relating to some of the most pivotal parts of Worm. Although all articles contain spoilers, this article will reveal major plot twists and should almost certainly be avoided unless you have finished the story. Click here to visit a redacted version, although it will still contain minor spoilers.

Zion, incorrectly known as Scion, is the avatar of a higher power.

To better interact and simulate humans,[4] the Warrior Entity created a facsimile of a human mind, which gave it a human mind linked to the alien's true self. He had never experienced any loss or hardship, and was correspondingly immature despite the years he spent on Earth.[5]

With the realization that his counterpart had disappeared and was probably dead the golden man was dejected on a scale humanity has not evolved to grasp.[6] One of the only things he did was destroy Damaged Shards on sight.[7]

He eventually would follow Kevin Norton's instructions; traveling from place to place at supersonic speed, helping people, saving orphans in wars, fighting The Endbringers, stop fires and natural disasters. He wouldn't rest.[8][9] He would also act to prevent things which would kill large numbers of people and prevent shards from finding hosts.[10] This included being polite to people it met.[7] He could be overly literal in interpreting Norton's suggestions, but didn't always follow them to the letter.[11] The heroes had no way to contact him, having to simply hope that he would notice when they were in a dire situation and intervene.[12][9]

Although Zion's face was perennially expressionless, he somehow communicated emotion to others. When he first appeared, he radiated sadness.[8][13] He seemed to radiate disgust when looking at Eidolon.[14] This was tied back into his partner's disappearance.

Zion used precognition to follow a path that led to reuniting with Eden, not anticipating the possibility that what he would find was her corpse.[15][16]

Listened to him and started helping people.[11] He floated around peacefully while Norton talked with him and clothed him. He took his name from a word that Norton spoke.

Scion appears as a burnished gold man with long hair[8][17] and a short beard,[11][17] otherwise he was glabrous.[8] His eyes were the same featureless gold as the rest of his body.[11] He glowed with a golden light that caused water to wick off his hair and body, and cleaned and dried his clothing. It left a brief trail in the air when he flew.[11]

His expression never changes, but onlookers somehow perceive his emotions anyway (see above), which often leads them to describe him as looking sad.[8][13]

Norton later outfitted him with clothing. First a sheet worn over one shoulder and pinned at either side of the waist, then more conventional clothes.[8] By 1999 Zion was in a white bodysuit[11][17][8] extending to his biceps and toes,[11] without shoes or gloves,[18] but his costume did include a plain white cape.[17] His clothing was often filthy, but would slowly but surely clean itself over time, causing the stains to fade as dirt and particles were pushed out of the fabric.[17][11]

During Gold Morning more and more of his clothing was destroyed and the debris of the battlefield found its way into the crevices of his body.

Scion was considered the most powerful individual in the world.[14] His powers were so strong that they put him "head and shoulders" above everyone else, with the exception of the Endbringers.[19] He was even powerful enough to defeat an Endbringer,[9][20] the only hero who could do so except for Eidolon.[21]

After sacrificing most of his shards to grant powers to humans, he retained those powers that he would need to defend against Earth should he have to fight. He relied on a limited store of energy to use these powers, meaning some could only be used sparingly.

Scion's primary power is the power to negate any kind of wavelength using his golden light. This effect is extremely versatile; it can be used to disintegrate matter, slow or stop motion, and negate the effects of specific powers. Stilling can be fired as beams, orbs, or area bursts, used as a force field, or transmitted by touch.[3] When used offensively, the effect lingers, continuing to eat away at the target after the initial attack. Offensive blasts range greatly in power, from thin beams to continent-destroying blasts.[3][22] Using this power disturbed electronics.[23][24] Similarly this power could block numerous Thinker powers.[25]

Scion can fly at immense speeds as an application of his general golden light aura.[23] At his fastest, he was able to fly to the other side of the world in less than a minute.[24] He left a short golden trail in the air.[11]

Scion can sense everything around him through unknown means. He appears to have control over the range of his senses, and can see into other universes if he chooses.[7] He can also use the senses of parahumans, since they carry his shards.[26]

Scion's body is only an extension of a vastly larger being. Any damaged tissue is replaced within a fraction of a second by undamaged tissue from the main body. This happens so fast it is almost impossible to tell he was ever injured.[28][29]

Scion is immune to certain types of powers. His actions cannot be predicted with precognition,[30] his powers cannot be copied, and powers cannot directly interfere with his mind in any way. In addition, his multiple senses make him very difficult to blind or mislead for any period of time.[31]

Scion can "tune" his defenses to defend against specific powers (see Stilling.)

Scion can learn what actions he must take to achieve a specific goal. Unlike Contessa, he can use this power in any situation, but it drains him and he has to use it sparingly. This ability costs him a lot of lifespan to use.[2]

Scion can move through alternate universes.[24][32] If necessary, he can also attack objects in other universes.[33]

Scion can transmit visions of himself and his memories to parahumans via his shards.[34]

The Warrior creates an extension of himself in the shape of the host species. He waits for a year before realizing that something has gone wrong. Stepping into the target reality, he sees his shards raining down alongside the shards of his counterpart. He destroys them on sight and then expands his perception across the world and other realities. The Warrior learns that the Thinker is dead and realizes that he cannot complete the cycle. He experiences a deep, profound sadness for the first time.

On May 20th, 1982,[8] Scion notices a vehicle approaching and how the people begin to communicate with each other and worship him. He sees one of the Thinker's shards taking root in one of the passengers, that the man is dying of a systemic issue in his body, and kills the cells responsible for causing the disease.[7] This also cured the man's sister.[8] Then, he turned away from the crowd and flew away.

He then spent years wandering the world, observing.[11]

Scion was later approached by Kevin Norton. Kevin threw one of his shoes at him before charging at him and beating at his chest. Kevin shouted at him, saying that he didn't deserve his power before demanding to know what he had to be sad about. He then told the Warrior that he didn't deserve to be miserable and then told him to go do something with his power: save orphans from wars, save people from burning buildings, clean up after disasters, and etc. Kevin suggested that it might help him feel less miserable and the Warrior considered his words. He decided that it could be something he could do and then took flight.

For years, Scion followed Kevin's instructions,[7] faster and faster. By the middle of the 1990s, he was traveling from crisis to crisis, flying faster than the speed of sound.[8] He would regularly return to Norton and listen to him, both giving instructions on how to better save people and to his thoughts on life.[11] In 1999,[8] he was given a white bodysuit and was told to keep it clean.[11]

Then, Scion came across a burning town and began to exterminate each source of heat. He lowered himself to get a better shot at the library and came into contact with a woman who asked him his name. It remembered the story that Kevin had told it once and then answered her, telling her that his name was "Zion" though she misheard it as "Scion".[7] This was caught on camera, and was the only time Scion was known to have spoken.[8]

At some point, Scion reacted to a nuclear test in the same way he had been reacting to paramilitary groups in Africa and the Middle East, shooting down a test missile and destroying the launch facility. This quietly convinced nuclear powers that Scion would intervene, effectively ending the Cold War.[10]

After Behemoth first attacked, Norton saw on TV that he had flown right past the monster to come visit him. He told Scion to help the heroes fight the Endbringers.[11][35]

Scion appeared at the Battle against Leviathan, driving the creature away.

Scion was told to begin killing the Endbringers by Kevin Norton when he realized he had merely been fighting them, not trying to stop them.

He destroyed Behemoth[36] and healed much of the damage that his radiation did to the defendants., but was unable to defeat the other Endbringers once they adopted new tactics.

Was attacked by Gray Boy, broke free, then started listening to Jack Slash.

Scion by Chianina on DeviantArt

Scion by Wolfragnorok on DeviantArt 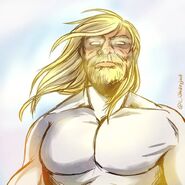 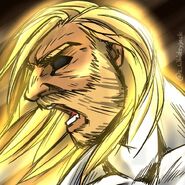 S-Class Threats by BenswFrenefits
Add a photo to this gallery

Retrieved from "https://worm.fandom.com/wiki/Scion?oldid=53821"
Community content is available under CC-BY-SA unless otherwise noted.