Satyrical or Satyr for short, is the current leader of the Las Vegas Protectorate.

Satyrical appears to enjoy lying and head games. He is overtly sexual and very flirtatious but remains in love with Pretender.[3] Further, he knows how to use these traits to his advantage.

Satyrical wears a helmet sculpted to look like a goat's head with its mouth in a perpetual smile and large eyeholes, belts and leggings. His chest is muscular and waxed free of all hair.[5]

Satyrical is capable to shifting his appearance into another person.[6]

Additionally capable of splitting apart into multiple clones in a "oozing process" that starts with a polyp that grows separates from him and then takes on more defined features,[7] he can vary the time it takes for this to happen.[8] These clones in turn have their own shape shifting ability, but while he can make them physically stronger than a target of equivalent mass, he can not replicate any powers they might have.[8] Once killed or dismissed, the clones wither[9] and collapse into bloody messes[10] respectively.

It is unclear how he processes his clones, whether he retains a link to them[10] or if they are largely autonomous. Further, how far his clones can operate from him before collapsing is unknown.

He is very skilled at bluffing,[11] psychology,[6] at least one form of sign language and likely cold reading.[10] All skills essential when operating in the crowded Thinker environment that was Las Vegas.

Satyr has been implied to have received his powers from Cauldron.[2]

When it came out that Cauldron was behind many parahumans within the Protectorate. With Satyr being zeroed in on as a client of Cauldron, Pretender killed a Watchdog Thinker who had discovered Satyr's past.[4][12][13] When The Protectorate came to take Pretender away for his crimes Satyr was not happy about it.[14]

Arrived to fight off mercenaries that Pretender had hired to free himself.[1] There he announced that he and his team were leaving the protectorate.[15]

His best "friend" was kidnapped by the same people.[16]

Attended the fight at New Delhi, arriving in a way separate from the rest of the Protectorate.[17] Survived the entirety of the fight and was there when Behemoth attacked the hospital Satyr was seen marching out to defend the building along with other capes.[18]

Ran his team independent of the Protectorate, and did several missions for Doctor Mother during this period.[19]

Infiltrated the Cauldron Compound to find out what had happened to the Doormaker, ambushed Revel and Exalt to control the situation. Tried to side track the follow up team led by Weaver but was unable to.[10]

Used his power to kill many of the Case 53s that made up the Irregulars, either by ganging up on them,[9] or infiltrating them and using Floret to clean up any evidence.[20]

Would come face to face with Taylor's strike team.[21] He tried to prevaricate and wasted time. Presumably trying to find a way to rescue Pretender, and other members of the Cauldron staff, without their interference.

Later fell in with Teacher's Group. 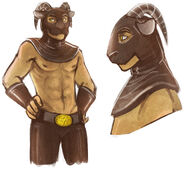 Image by Lonsheep on Deviantart.
Add a photo to this gallery

Retrieved from "https://worm.fandom.com/wiki/Satyrical?oldid=53818"
Community content is available under CC-BY-SA unless otherwise noted.