She has a no nonsense attitude and initially keeps Weaver on a very tight leash. She was protective of her subordinates including Golem, and eventually Weaver after the former villainess earned her trust.[1]

Revel is a woman of Asian descent who wears a painted mask that covers her lower face, a white, skin-tight outfit with straps at the shoulders that ended mid-thigh, and a crimson kimono held in place by belts. She also carries a massive tinker-made lantern on a stick.

Revel had displayed the ability to manipulate and capture diverse forms of energy[2][3] with her lantern and then use that energy to launch orbs at her enemies. The more energy she collects,the greater the charge she has for her orbs, which are roughly a foot across and deep each, and can follow complex flight patterns that she sets along with specific detonations.[4] She can also reprogram these orbs after they have been launched,[5] and can decide whether they damage allied targets or not.[3]

This allows her to survive lighting blasts from Behemoth,[6] though she was blown back far enough that she received a head injury.[1]

Revel also has the ability to fly.[3]

She carried around an Eastern style lantern that allowed her to store the energy she manipulates. It was made by a tinker.[7]

She deployed at Madison Wisconsin to combat the Simurgh. There she failed to stop two detainees, a boy and a girl from escaping custody.[8]

Served as second in command in Chicago under Myrddin.

Fought against Behemoth and survived a lightning bolt. However, this gave her a head injury that would take her months to recover from. Revel became the unofficial second in command of the new Protectorate. She considered Taylor a hot head

Fought against the The Slaughterhouse Nine-Thousand deployed in a team with Chevalier.[5]

She was killed by Scion while controlled by Khepri, erased alongside a number of capes including Trickster and Ash Beast.[9] 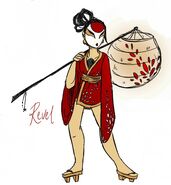