Ratcatcher is a rodent themed superhero, who would eventually become a part of Foresight.

Ratchatcher is an agreeable person who speaks with a lisp.[3] She has a playful side and could get along with people, even non-humans.[4]

Had a reputation for being a hot head and a walking disaster.[5][6]

She had not joined the Wardens or Foresight.

Was friends with the Heroic Blaster.

Warmed to the disfigured Thinker,[1] did not seem to realize that he was effectively blind and could not see her unmasked appearance.

Seems to have a rapport with Sveta.

Is a bit on the short side. She has mentioned that people tend to find her face disturbing without the mask, but her exact appearance has not been described.[7] This combined with her unusual eyes and lisp may suggest a deformity, power-related or not, but this remains ambiguous.[8] Her face is heavily scarred.[9]

As a cape she wears a wire and paper-mache rat mask which covers her face. The more elaborate version of her costume features a belt with various mousetraps on it, a denim jacket and shorts, and shirt and socks with a lively striped pattern. Dot appreciated it.[8] Also wore a simplified costume incorporating a sleeveless top in warm weather.[3]

Can see small detached objects regardless of the obstacles between her.[10] She was not able to sense internal objects but she was able to see small things whether animate or inanimate.[11]

Like Hellhound, she keeps trained animals, in her case rats.[8] She seems to have trained or commanded her rats to retrieve the objects that she found, and further says she can get her rats to open doors for her, in another. She could probably maintain an awareness of them while they were out of reach. This may be why she says that rats can "talk" to her.[12]

Following the shift in powers she was able to scrutinize minute details of people, able to see the Parahuman Plague as it stole it's way to it's hosts.[9]

She's probably had a natural thinker trigger, and may have had powers from a very young age.[7]

Spent some period of time as a villain, but was trying to reform by the start of Ward. Her reputation for inappropriate social behavior was apparently more of an issue than her villainous track record on this front.[2]

Worked at the Gimel Portal in The City there she met Crystalclear.[13]

Tried to stop a stowaway.[11] The thing told her that her friend Burnish had died. While Ratcatcher was heartbroken, she was still willing to give the creature water before sending it back through the portal. The thing betrayed her trust, fled, and killed three of her trained rats in its escape.

May have been on duty when word came that sabotage for the portals was going on. Regardless she survived and continued working near the portals.

Was willing to help when the refugee intake center saw a massive influx of people, later got involved stopping in the Cheit-backed terrorist attack there.[14]

Got assigned in parahuman prison camp as an undercover agent.[12] Was conntacted by Breakthrough when dealing with breakout.

She went into the tunnels to try and deactivate the system she split up into a team with Crystalclear, Tress and Swansong. After the actions of the the allied parahumans swamped the tunnels with large amounts of water Ratcatcher withdrew into the ventilation ducts and exited.[16]

Emerging from them Ratcatcher searched out the teacher-drugged food, possibly helped by Natalie, and was able to find and bring the materials to a secure location. Despite this she was still captured and was tied up but not before she took some of the food herself. Ratcatcher was able to signal Antares to get the flyer to go and investigate.[17]

Ratcatcher had failed recruitment to Foresight. Victoria and Tattletale paid her a visit.

She was being tested by Foresight again.[2] Presumably, succeeding this time.

Ratcatcher received the Victoria's plague from Crystalclear after some persuasion.[18] 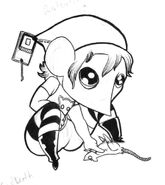 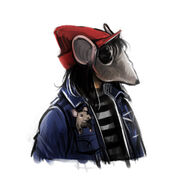 Art by Lonsheep.
Add a photo to this gallery

Retrieved from "https://worm.fandom.com/wiki/Ratcatcher?oldid=57534"
Community content is available under CC-BY-SA unless otherwise noted.