She is not naturally violent, but found herself and her family drawn into the conflicts of Worm. She felt a great amount of responsibility to those who came to her for help.[4]

She is very socially conscious, planning to keep her true ethnicity concealed to promote dialogue regarding assumptions about capes.[5]

Her best friend, they are very close. They are a couple.

Feared Skitter to an extent. Eventually came to respect her. Was reluctant to accept her offer to join the Undersiders.

Considered Rachel to be unstable and was constantly wary of her power.[6]

She was short, the same height as Accord.[7] Parian wears a costume reminiscent of a Victorian-style porcelain doll, with golden curls. After joining the Undersiders, she changes her dress and hair to black in order to appear more intimidating.

Underneath the costume, she stands just over five feet tall and is of obvious Middle-Eastern descent, with dark skin, full lips, and large, dark eyes.[8]

Parian's power gives her a fine control over lightweight materials. If she attempts to control anything heavier than a half-pound, her telekinesis falls apart. It becomes more unstable when she attempts to move large objects until it expands and dissipates over an area in an attempt to extend control to a number of tiny, lightweight objects.

Parian discovered that she could contain her power and keep it from dissipating. Porous materials worked best for this method as her power soaks into them and allows her to move the fabric rather than just the material. The gaps within the material also allow her to feed power into the 'shell' without it building to critical mass and collapsing.[7][2]

Wildbow has mentioned that Parian has a "true use" of her power, which is effective against Behemoth, although it was not revealed in Worm.[9]

The true use of Parian's power was later revealed to be working with the skin of dead humans. She can flay corpses and infuse their skins with her ability, manipulating it like she would any other material, but with better control and more strength. She can also use hair and tendons from corpses as thread. By sewing the skins of numerous dead together, she can create a giant construct that is capable of taking an attack from a Titan.[10]

Sabah immigrated to the United States of America from Basra with her family before they moved to Brockton Bay. There she had been forced to learn English alongside other subject matter by herself as her parents were too busy. After graduating high school, she attended university where she studied the 'grittier' courses such as math and engineering.

Sabah drew attention from a boy in her class that became interested in her. She tried telling him 'no' multiple times but wound up being labeled as a 'bitch'. The other students wound up hearing and turned on her which lead to her schoolwork starting to suffer as no one wanted to work or study with her. She caved six weeks afterward and apologized to the boy, telling him that she had had a bad day. She began dreading going back to class and dealing with him.

Eventually, Sabah's father suffered a terminal heart attack. She triggered on what was only one in a long string of nights spent alone, stewing in frustration. It was the push she needed to get away from the boy as it gave her a new goal: success in fashion design.[7][11]

After triggering, she was described by Taylor as only using her powers for "business or entertainment". She sometimes partnered with stores in downtown Brockton Bay, animating mascots or other large characters for promotional purposes.[12]

Parian took up defending a territory, Dolltown, after Leviathan attacked the city.

After the people she was offering protection to were surgically altered by Bonesaw to look like the members of the Slaughterhouse Nine, she took up Skitter's offer to join the Undersiders in order to afford good doctors to reverse the result of Bonesaw's attention.

She struggled to take control of Bitch's old territory, not having the respect or other villainous qualities of the other Undersiders. She was extremely cautious of Accord, wary for a trap at any moment.[7]

However, she would negotiate with the local heroes, leading to Skitter's Surrender. As events were underway, she was finally joined by her friend and ally Flechette, who changed her name to Foil and became Parian's lieutenant and lover.

Sabah was kidnapped by her lover's recurring enemy, March, on the villain's second visit to Brockton Bay.[13] It is unknown what Parian did when March came to the city for the first time.

Had become a long term member of the Undersiders.

Saved her leman from the wrath of Zion. Was appropriated by Khepri and willingly returned to the goddess's control.

Attended the meeting of the former Undersiders, toasting their fallen comrades.

The year after the GM she asked Tattletale for consultation regarding her power.[14]

Assisted with the attack on The Fallen.

Parian was taken out of commission by Nursery.

Parian was alongside The Undersiders and Breakthrough during the oversight duty of Titan Oberon and Eve. During the battle of titans she stayed with the rear group, where she shielded people from the effects of the gas, and helped them to retreat later, saving Chastity Vasil.[15] Later she provided expendable puppets until she ran out of materials. She recovered Foil and Switch Hitter with leather-made bird. With Wardens approval and on Tattletale insistence she used bodies of the fallen capes to create a giant skin puppet and tie down Titan Skadi.[16]

She was present during the fight with Fortuna's titans.[17]

Foil & Parian by aerryi on DeviantArt. 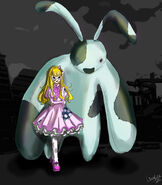 Parian by LinaLeeZ on DeviantArt

Art by Matt-Lejeune-Art on deviantart

Illustration by Pabel and Nine on tumblr.

Art by LinaLeeZ on deviantart.

Illustration by soap-committee on deviantart