Othello is a discreet member of the Ambassadors.

Othello possesses a 'mirror self' or 'imaginary friend' that travels in another world, and only has limited interactions with reality.[6] It must move around to gather intelligence, its passage does not disturb anything in the normal world as someone who is invisible or even intangible might.[4] However it can not walk through walls or similar as it occupies it's own mirror world that reflects wherever Othello is.[6]

He can shunt himself into the mirror world, bringing his other self in from that world at the same time — producing an effect that could be mistaken for teleportation.[6] He can control the nature of the interactions between his 'mirror self' and the world, allowing it to attack while remaining otherwise invisible and intangible, making shallow cuts and similar to targets. This ability required concentration.[2]

The sensory input he receives from his companion is resistant to Imp's power,[3] and may apply to other similar powers as well.

Like all Ambassadors, he was recruited by Accord as a normal human, albeit an already accomplished one or one that had the potential to be.[7] After passing all the tests and conditions that Accord gave him,[8] he was awarded a vial that gave him his powers.[9]

Othello was one of only two Ambassadors to survive a confrontation with the Slaughterhouse Nine.[10] He accompanied Accord to Brockton Bay.[9]

He participated in a battle against the Teeth alongside the Undersiders and other Ambassadors, old and new.[2]

He was present for a tense meeting between the Ambassadors and the Undersiders during Skitter's Surrender.[11] 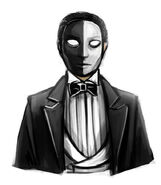 Mask and costume design by Lonsheep

Retrieved from "https://worm.fandom.com/wiki/Othello?oldid=60789"
Community content is available under CC-BY-SA unless otherwise noted.