Oni Lee was one of Lung's lieutenants in the Azn Bad Boys.

Taylor Hebert described Lee as a "scary sociopath".[1] His Parahumans Online page contained a bright red warning that he was exceedingly violent and should not be approached.[2]

Grue noted that "there's a reason he's not leader of the ABB"; observing that he "got spooked without his boss there" when fighting the Undersiders.[3] Though it should be noted that, as Grue's power is a effective counter to Oni Lee's abilities, he had reason to flee.[4]

Jack Slash determined that Lee's mind had been "wiped" by successive teleportation, describing him as a "tabula rasa". Although he was able to hold a conversation with Jack, and expressed interest in having his leg healed, he was unable to propose possible tests for joining the Slaughterhouse Nine.[5]

Oni Lee had a "distinctive look",[1] a black bodysuit with belt and bandoleer of knives and grenades on it, and a demonic mask with leering, fanged, ear-to-ear grin.[6][7][2] The mask was Japanese in style, crimson with two green stripes down either side.[8]

Oni Lee's power is a hybrid between teleportation and duplication. When Oni Lee teleports, he leaves his original body behind which can act autonomously for five to ten seconds before disintegrating into a cloud of white carbon ash. Essentially, he can create another version of himself anywhere within his line of sight, while the old version can stick around long enough to distract or attack his target.[2][9] He can not teleport to anywhere he cannot see,[4] It is unknown if his own carbon smoke gets in the way of his teleporting.

Oni Lee has used this duplicative teleportation to act as a immortal suicide bomber ,[2] to swarm opponents, and create smokescreens. The downside to this ability is that, when he teleports, he also clones anything that is on his body. This allowed Skitter to track him after directing her insects to bite and sting him as they were teleported alongside him.[10]

Oni Lee was recruited by Lung from a destroyed gang, sometime between when Lung came to America, joining the first incarnation of the Azn Bad Boys, and when the man-dragon settled in Brockton Bay.[11]Oni Lee was Lung's only parahuman lieutenant prior to Bakuda's recruitment. The exact details of his power weren't widely known. He had been labelled a sociopath by the PRT.[1][2]

He fought Purity on two occasions.[12]

Lee fought the Undersiders along with a half-dozen ABB members, but fled when Lung didn't arrive to back him up.[3]

Oni Lee was inside an Azn Bad Boys warehouse that was attacked by a coalition of capes from Brockton Bay's other gangs. He attacked and incapacitated Newter on the second floor of the building.[14] He fought Skitter, Sundancer, Bitch and Labyrinth, along with snipers from Coil's Organization. When Skitter discovered his teleportation brought her bugs with him, he was shot in the leg and forced to flee.[10]

Jack Slash found Oni Lee living above a grocery. Jack told him that the Nine could heal him if he proved himself. Jack challenged him to propose a suitable test, and realized that Oni Lee was basically a blank slate when he was unable to propose anything. Jack defeated Oni Lee, transported him to Kayden Anders' apartment, and dumped him in a bathtub filled with ice and other frozen objects.[15]

Jack later removed Oni Lee from the bathtub and told Theo Anders that he would be giving him as a treat to one of his teammates.[5]

Oni Lee was revealed to have suffered moderate brain damage from his ordeal that Bonesaw fixed before she meshed him together with Hatchet Face to create Hack Job. Bonesaw told Amy Dallon that Oni Lee couldn't control his body, but was fully aware of what was going on.[16] 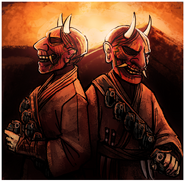 Art by lonsheep on deviantart

Art by aerryi on DeviantArt.

Art by TomGizz on Tumblr.

Art by ElianeDeFortuny on deviantart 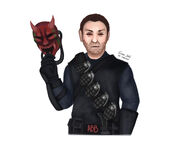 Art by ElianeDeFortuny on deviantart 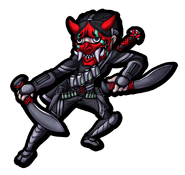 Art by Scarfgirl
Add a photo to this gallery

Retrieved from "https://worm.fandom.com/wiki/Oni_Lee?oldid=53788"
Community content is available under CC-BY-SA unless otherwise noted.