Newter is a Case 53 and member of Faultline’s Crew.

Newter is roughly 16 years old. He tends to act his own age, even pursuing girls his own age at Faultline's club. He is generally pretty lighthearted, not appearing to be stricken by looking different from "normal" people, but has shown himself to become serious while conducting business.

He has no reservations about the recreational drugging of willing participants with his body fluids. It's use in combat is also deemed acceptable.

He has orange skin, light blue eyes, dark red hair, and a five foot long prehensile tail.[1] While his hair is naturally blond with a reddish tint,[2] in the course of the novel he dyed[3] his hair blue,[4] red,[5] and later pink.[6] Newter also has a tattoo that looks like: "the greek ‘Omega’ symbol, but upside down.  Maybe a stylized ‘u’" which is "just above his heart".[1]

His eyes have no whites, only blue irises that extended from corner to corner, with rectangular, horizontal pupils.[4]

Newter casually walks on all-four, since his tail makes it hard to stay upright.[7]

All his bodily fluids (including sweat) contain powerful hallucinogens which can "send someone off to la-la land" in "only a few seconds"[4]. When Newter brushed against some of Skitter's bugs they "dropped off the wall or out of the sky, falling to the ground, alive but stunned."[4] Skitter observed that several of the people that Newter were fighting were removed from the fight before he even touched them, leading her to believe that he hit them with either "blood" or "spit"[4]. This deviant body chemistry extends to the point that he does not get infections from foreign microbes.[8]

Newter's altered body has other benefits. In addition to a prehensile tail, he is noticeably tougher than a normal human, able to operate with wounds that amazed a trained medic.[8]

Newter is able to leap in excess of 15 feet exceedingly fast (it is said that it takes the same time for him to leap from one opponent to another as it takes Skitter to throw a punch). He appears to move in a half-run half-crawl manner which allows him to move faster than the average person (was easily able to keep up with Brutus when he was larger than a horse).[citation needed] Additionally, his ability to move vertically appears to be exponentially better than the average person as at one point "he darted up the side of the building and slipped into an open window like a bolt of greased lightning"[4] presumably indicating that he has some form of enhanced ability to grip objects (wall-crawling).

Three years before the beginning of the story an anonymous man's life was saved by Alexandria.[9]

Waking completely empty of his past life Newter would make a home in the sewers before he wound up recruited by Faultline.[5]

When the Azn Bad Boys went on a rampage Newter is seen for the first time at the villain meeting to decide the course of action the criminal elements of Brockton Bay would take.

When participating in a raid against the merchants Newter went off after some papers scattered by Skidmark. He ran into some mercenaries and two young women who he knew in more colorful attire. Tattletale and Skitter were able to open a line of negotiation with him before handing over the papers.

Dealt with a visiting member of the Slaughterhouse Nine, though he and the rest of his team came out the worse for wear.

Infiltrated Madison Wisconsin as part of the continuing investigations of the group into Cauldron.

Gave Gregor a hard time about his new relationship.

Together with the Palanquin people he attended emergency power testing of Case 53s, arranged by The Wardens to see if any of them could be useful in the fight against the Titans.[10] 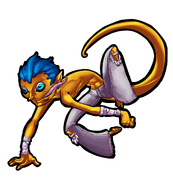 Created by Scarfgirl
Add a photo to this gallery

Retrieved from "https://worm.fandom.com/wiki/Newter?oldid=54824"
Community content is available under CC-BY-SA unless otherwise noted.