Recognized by The Protectorate

Insinuation 2.6
New Wave, originally the Brockton Bay Brigade, is a family group of heroes operating in Brockton Bay.[1] It's one of the only teams to not draw a clear line between civilian and cape identities.[2]

Intended as the start to a movement of publicly accountable superheroes without secret identities,  New Wave was meant to be much bigger than it ultimately was. The death of Fleur put an end to the groups upwards trajectory and stalled them at the level of a small town super team, supplementry to but independent of the local PRT.

In the field, they run into logistics issues based on the ability of some of their number to fly while others cannot.[3]

New Wave is a team consisting of two related nuclear families, perhaps best known for their advocacy of superheroes without secrets and full accountability.[1] In the past, they received national attention when they unmasked publicly after their take-down of Marquis,[4] taking the name New Wave at the same time.[1] Their movement quickly stalled at its peak with the death of Fleur, who was murdered in her civilian identity. Lightstar left the team and resumed his concealed identity as a result.[5]

In modern day, their roster has expanded, with all four of their children having powers of their own. All members are celebrities of a sort, wearing costumes without masks or helmets, each white with an emblem unique to each the member.[1]

As a PRT-affiliated team, New Wave engaged in merchandising alongside more official heroes, as well as their own local fundraising events and photoshoots.[6]

The team was rechristened New Wave and its members unmasked, in an effort to be a new breed of publicly accountable superhero. Leadership of the new team was passed to Lady Photon. For a time they became national celebrities. They even deployed to Boston to deal with an upswing in the criminal community there.[21]

The group's sucess would not last. The wind was taken out of their sails when Fleur was assassinated in her civilian identity by an unpowered street criminal looking to gain influence with Empire Eighty Eight; Lightstar left the team shortly thereafter.[2] With the risks of publicly unmasking now on full display, the driving concept of unmasked heroism failed to gain traction outside of the two founding families of New Wave. Despite their ideological defeat, the team retained some degree of celebrity.

Worm places most focus on the Dallon branch of New Wave, particularly Panacea and Glory Girl. As a team, New Wave makes it first appearance during the outing of members of Empire Eighty-Eight,[22][23] quickly followed by the battle against Leviathan,[24] where they lose Manpower[8] and Shielder.[12]  Flashbang survives the fight but receives a severe head injury with long-term debilitating effects.[13] The team considered disbanding as a result.[25]

The attack by the Slaughterhouse Nine and the subsequent incarceration of Panacea[17] and Glory Girl[16] causes New Wave to fall apart, with some members operating individually and others retiring from cape life entirely.[1]

The remaining adult members (Lady Photon, Brandish and Flashbang) are present at the oil rig during Gold Morning.[26]

Lady Photon was later killed by Scion, while under the control of Khepri. 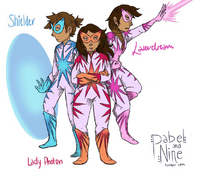