Interlude 2
Heavens 12.x (PoV)
Narwhal is the head of the Guild and the leader of the Protectorate's Toronto branch.[2][3]

A former member of the military,[4] this carried over to her interactions with people. Taylor Hebert could immediately sense she had some kind of military background.[5] Somewhat like Rachel Lindt the manifestation of her abilities caused a mental shift in Narwhal's psychology, making her extremely driven and a workaholic.[4][6][7] When not on her downtime, she is as unyielding as her forcefields and is notoriously hard-nosed;[8][9] Narwhal is as tough as Rachel is gruff.[10] She expects her subordinates to keep up with her.[11] In battle, Narwhal is an effective commander and very focused on the mission.[12]

Her subordinates did not want to get on her bad side.[13] After Narwhal learned from Vista that Victoria being sent to an off-duty Vista while she was with her boyfriend led to Capricorn and Victoria accidentally interacting before those two could be trusted,[14] she dressed down Vista in public.[15][16] This public humiliation of Vista outraged Victoria[17] and led to Carol Dallon standing up to Narwhal on behalf of Vista.[18][19][20] That said, she is more reasonable than Cinereal: Victoria thought Narwhal was a militant, no-nonsense, all-business leader who would at least bow to better arguments.[21] Although Narwhal would remember incidents for weeks and months, such as Vista and Byron casually chatting during the Mathers Compound Assault, Victoria believed she would remember what her mother said and take that into account.[22]

She tries to address people she respects how they want to be addressed. She is formal and naturally inquisitive.[23] Narwhal reassured Victoria after her negotiation with the Red Queen.[24]

She considered Chevalier's leniency with Ingenue to be ill-advised.[25] When Narwhal saw Sveta embrace Weld sometime after the Assault on the Time Bubbles, she internally referred to Sveta as an it and too far from human;[26] she liked Slician for him more than she liked Sveta.[27]

By all reports, she is pretty cool during downtime.[8] Narwhal is presumably an avid reader, as she thanked Weaver for her book recommendation.[23]

Her PoV chapter reveals that her personality is propped up by formalities and "proper" behavior in the same vein as her body by her force-fields.

Narwhal is the leader of a team with international renown. Further, she's considered one of the top heroes in the Protectorate,[28] along with capes like Chevalier, her fellow Guild member Dragon, and Legend.

All that despite aversion to publicity appearances.[29]

She uses her power to create a single, three-foot horn on her forehead and coat her skin with fine crystalline scales.[31] Her "scales" are each no larger than a fingernail.

After the timeskip she started wearing her horn curving backward over the top of her head.[32]

Narwhal creates crystalline forcefields that have a noticeable violet-blue tint[32] and shine with faint rainbow hues when they catch the light.[31] She can move them at high velocities (40 km/h),[33] though only in straight lines.[34] If the target is within fifty feet of her, Narwhal can create a forcefield that bisects part of the target's body,[35][36] such as an appendage or the upper body.[37] This is a violation of the Manton effect and a result of her second trigger.[38] Prior to that, she was unable to create force-fields that bisected people.[39]

Her power is strong enough to cut into Endbringer flesh to an extent,[40][41][42] yet she also has much finer control, able to use her force fields almost in lieu of telekinesis to manipulate or destroy[43] small objects,[32] capture people,[25] and as a kind of stretcher[44] or platform.[45][46] Letting her function as a kind of mass transport system if need be.[47]

Attacking her forcefields causes them to light up.[48] They are durable enough to tank an explosion from March's power.[49] However, it is possible to break through[50][51] or shatter[52] her forcefields with enough force.

Her power was considered to be equally split between offense and defense.[53] Temperature did not conduct through her forcefields.[54]

Triggered while trying to protect somebody.[6]

At some point, triggered again.

Joined the then-failed Guild and was responsible for it being revamped into the elite organization it is today.[55]

Narwhal has an experience in dealing with warlords and making sure that their victims were able to become independent.[56]

After the program Armsmaster and Dragon made predicted that Leviathan would attack Brockton Bay, Narwhal traveled to the Protectorate E.N.E.'s base. She listened as Legend addressed them with a pre-battle speech.[1]

Narwhal then received an armband from the Brockton Bay Wards. When the ceiling started to cave in, Narwhal flicked two fingers towards the ceiling and shored it up with forcefields. She was later teleported out of the building by Strider.[57]

Narwhal later manifested a dozen forcefields and flicked them towards Leviathan. She redirected the forcefields that glanced off Leviathan's skin; having them press against the edges of his body and get in the way of his legs moving. After the dumpster that Ballistic launched at Leviathan forced him backwards, Narwhal sent another forcefield into Leviathan's neck. Her efforts tore a large enough hole for Kid Win to take advantage of.[58]

Moments later, Narwhal was alerted to an approaching tidal wave by her armband. She created forcefields in-between the defending capes and Leviathan before it hit. She was listed among the losses after the final tidal wave hit,[59] this was later shown to be the casualties list as her name did not appear on the Brockton Bay Memorial.[60]

She recovered and returned to duty.

Was present at Killington for the staging of the anti Slaughterhouse Nine task force.[61] and was active during Gold Morning.

Was an active participant, acted as a guard on Saint.[32] She doubled checked everyone's identities before allowing them to talk to her prisoner.[23]

Her power proved pivotal at several key junctures during the event.[47] Part of the goddesses psychological offensive against Zion.[46] Narwhal was instrumental, if unwillingly, in Khepri's escape possible.[43]

Narwhal was still active two years after Gold Morning as a member of the Wardens. She was considered one of the group's key members, having her own statue in the Warden HQ lobby.[62] She was at the meeting between the Earth Gimel leadership and the theocrats of Earth Cheit; she later met with members of Foresight and discussed what the Wardens needed from the group.[63]

She took point as leader of the Wardens contingent in the attack on the Mathers Fallen compound.

She was present during The Wardens attempt to stop March from reaching Brockton Bay time-bubbles.[64] At the dawn of the next day she talked with Foil and gave her information on March's Megacluster.[65]

Narwhal was seen defeated alongside Chevalier's group during Wardens' assault on Teacher's Compound.[66]

She had recovered, and was in commanding position during the second Shin crisis.

Narwhal reprimanded Vista for the incident with Capricorn.[67]

She represented the Wardens during the negotiations with The Red Queen, albeit without much effect, during the second Shin crisis.[68]

As the most of Wardens she was leading the charge against the Titans[11] and The Simurgh.[69][70]

In the battle against the Fortuna's Titans, she denied Ophion Titan regeneration by stuffing his wounds with forcefields.[71] 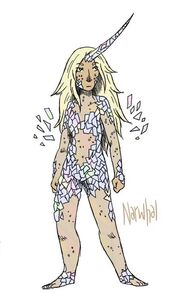 Image by Pabel and Nine on Tumblr. 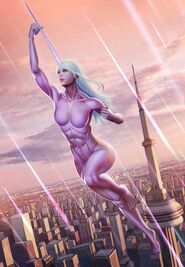 Image by Moonarc on DeviantArt.

Comic by RespicePostTe on DeviantArt (click for full image). 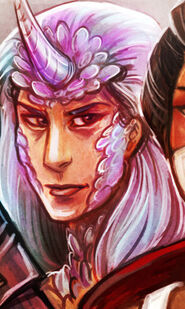 Image by Lonsheep on Deviantart. 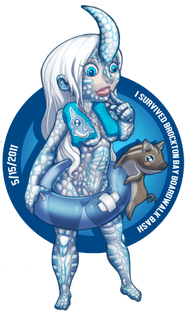 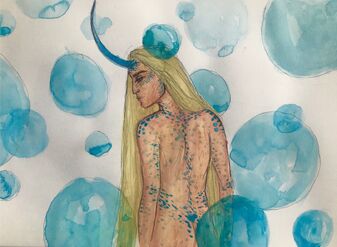