Nailbiter is a former resident of the Birdcage making the most of her second chance.

She had a violent history as a cape, villainous enough to be rapidly imprisoned in the Birdcage.[2] She may have mellowed out since then and was more than willing to accept help from unpowered people.[3] Was willing to forgive Damsel of Distress II for murdering Beast of Burden. She was fairly intelligent and noticed that Damsel had some connection to Victoria and her team.[4]

She has a killer's instinct, willing to use lethal force, or at least the threat of it.[5]

Had a working relationship with the villainess. Continued to do so after the disastrous assault on the fallen.

Like BoB before her Nailbiter has become a kind of second of command to Love Lost.

Worked with the young villainess but was genuinely suspicious of her.[4]

She is a thin, severe woman with mocha colored skin and bleached blond hair. What sets her apart are the sharp metal spikes crammed into her mouth in place of teeth. [6] [7] [8]

She is able to speak clearly despite her odd teeth her speech does have a slight whistle and hiss,[3] not unlike someone who has a cleft palate. Her deformity gives her voice an eerie quality.[4]

Invoking her changer form causes the appendage to elongate into pointed black spike with durability uncharacteristic to its size.[9]

Her cape name is extremely literal, having rusty nails for teeth,[10] yet it is also misleading. Her power is to extend any part of her body into a dangerous implement.[11] Usually, this means her arms and legs but it also means her torso, fingers, and toes, or any other body parts can be stretched to fine, barely visible points, while at the same time being durable, maintaining rigidity and joint mobility.[12] She can even weaponize her tongue.[5]

She can expand her face to something more like a crocodile so that she can bite people.[9] This interferes with her ability to speak, to do so she needs to pull her face back into a more human shape.[13]

It also gives her a certain amount of strength and speed, though this seems to only apply in her Changer form,[11] able to cover a good distance with her stride.[9] She is also able to use her ability to enter through tight spaces.[14]

Although durable, her stretched parts can be damaged, and transfer damage once returned to normal.[15]

Nailbiter had grown without father. As a kid, she joined Lustrum-inspired roaming gang alongside her sister, and at some point replaced her broken teeth with metal. Later her sister and the rest of the gang broke away, likely scared off by Nailbiter's growing tendency to maim people.[16]

Nailbiter was sent to the birdcage five years before the story starts.[2][17] She was in Ingenue's cell block.[16]

Was one of the guards at the bridge between the men and women's wings of the Birdcage. She challenged Lung when he was crossing to visit his former lieutenant Bakuda but let him pass when he provided an adequate explanation to the Watch leader.[7][Note 1]

As she was not part of the original Birdcage release she was likely taken from the prison when the goddess collected the damned.

Roughly nine years since her imprisonment[2] she had settled back into life as a villain, working with Beast of Burden. She found herself at the Lodge when Prancer made his pitch to the villains there.[18] made her way to Hollow Point and worked under Beast of Burden along with others.

Tapped by Prancer to deal with Damsel of Distress II when the girl showed up.[17]

When Advance Guard stepped into Hollow Point Nailbiter found herself paired with Love Lost against Victoria and Garotte.[19]

She was later part of the Mathers Compound Assault and fought many Fallen as part of the Hollow Point.

Fell in with Love Lost on a long-term basis.

Was with her team when they had a meeting at the Lyme center.

Nailbiter was in the group that had a drop on the joint team of Breakthrough and Heartbroken that was sent after March.[16]

Nailbiter evaded capture and her location was unknown.[20]

Nailbiter re-appeared as part of Damsel of Distress' new gang.[21]

She skipped on Deathchester's collaboration with the Wardens and Breakthrough. 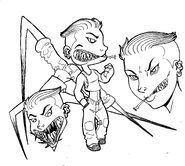 Retrieved from "https://worm.fandom.com/wiki/Nailbiter?oldid=61195"
Community content is available under CC-BY-SA unless otherwise noted.