Murder Rat is a hybrid cape, created by Bonesaw to be a member of the Slaughterhouse Nine. She was a combination of Mouse Protector and Ravager.

Murder Rat had hands and feet with three-foot-long machete blades attached to them.[1] Her eyes were small but surprisingly human, and nearly buried behind her altered face and brow, which had been altered into something that was more rat-like than human - conelike, ending in a squashed black nose that had staples around it. Bonesaw had added a second set of teeth, all canines, so that the woman would have enough as her jaw was stretched forward. Drool constantly leaked between her teeth in loops and tendrils.[2][3][4] She had long, greasy hair.[5]

Her body was "emaciated".[6] She was pale, except for her face and patches all down her body, where patches of ebon black skin were stapled in place.[4]

Although seemingly a single woman, Bonesaw had combined parts of Mouse Protector and Ravager, using transfusions of bone marrow and viruses with modified DNA inside them until even Panacea couldn’t tell for sure where one woman started and the other began. She had one and a half brains contained in a synthetic fluid in her skull.[4]

There was a metal framework throughout her body, controlling her, rigged to kill her with needles surrounding her heart if it was ever disabled.[4]

The later clones of Murder Rat boasted enhanced senses,[5][2] and were not held together with staples.[7]

Murder Rat is a composite of Mouse Protector and Ravager and possesses both their powers, blended into one.[8][4] Weaver noted that she had "a dozen" minor powers.[8]

When she cut someone with her blades, the wounds would begin fizzing and emitting smoke that stung eyes; they took a long time to heal, and almost always left a scar. Left untreated, they would usually bleed out. The effect was more intense when she was close by.[1] The venom continued to widen the wounds she inflicted for some time even after her death.[9]

She was able to "tag" something or someone by scratching them[10] using Ravager's ability to sense people she injured and Mouse Protector's power to teleport to those she had touched,[11] although the blooming smoke made it more obvious who she was teleporting to.[1]

When Grue copied the powers of a trio of Murder Rats, he mentioned that he could "kind of sense what others are sensing around me".[12]

Her skin was "as tough as leather" and highly resistant to Taylor's bugs, and she had some kind of enhanced strength, flexibility, reflexes and agility.[8] [5][13] They were able to cling to surfaces with their claws.[1][10]

An artificial member of the Slaughterhouse Nine, courtesy of Bonesaw. Murder Rat was a member in full having passed the requisite examinations. Yet over time the horror would slowly fall apart and lose the brains and skills that had made her such a terrifying presence.[7] In the end she was just a rapidly putrefying corpse being used as a lackey.

Disabled by Panacea using her power, as a test by Bonesaw. Mercy-killed by Mark Dallon.[4]

Several clones of this character appeared as part of the Slaughterhouse Nine-Thousand, despite being a Bonesaw creation. She is the only hybrid cape to be cloned multiple times.[14]

Weaver's team of Undersiders and Brockton Bay Wards engaged and killed three Murder Rats along with other The Slaughterhouse Nine-Thousand members at an apartment building in a small town.[1][9] The Undersiders and Brockton Bay Wards encountered three more Murder Rats in Redfield while Weaver was at Ellisburg.[10] The injured Golem encountered a Murder Rat during the Slaughterhouse fight in Los Angeles but was saved when Weaver killed her.[15] 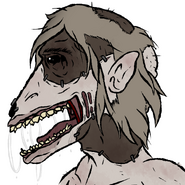 Murder Rat, by Jediqueer.
Add a photo to this gallery

Retrieved from "https://worm.fandom.com/wiki/Murder_Rat?oldid=53771"
Community content is available under CC-BY-SA unless otherwise noted.