Mouse Protector was an independent hero and former inaugural Ward.

She liked messing up with the very idea of superheroes as a child even if she was somewhat intimidated with the reality. She wasn't shy or impressed by authority either.[2]

This continued into adulthood, where she continued to play up the silliness of superheroing, making her opponents' defeats at her hands even more embarrassing. She found these little 'squabbles' enjoyable and this drove her needling personality in costume.[3]

During the first meeting of her Wards team, Mouse Protector carried a shield and a sword, and wore a helmet adorned with mouse ears that she had made herself.[4] [1] It is unknown what her costume as an adult looked like.

Mouse Protector was a Grab-Bag Cape,[5] her power grants her enhanced agility and stamina as well as a teleportation power where she could mark a target through touch and then teleport to them on a whim.[6][7]

After Hero mentioned that he understood what someone else was saying, Mouse Protector told him that they had the serious part down before thrusting her sword into the air. She later agreed with Hero when he said that some of them were in a hurry to grow up and become heroes. After Legend arrived, he told them to be careful and said that the purpose of the Wards was about training. Mouse Protector told him that part came later and Legend told her that it would if she still wanted it then.[2]

When Hero asked why Chevalier had sat by Miss Militia, Mouse Protector said that he probably thought she was hot and that he wanted the poontang. Reed told her not to be juvenile moments before Chevalier told her that he thought that they were similar. She asked him about it before she was told that Chevalier went after the Snatchers. After hearing the explanation, Reed told Mouse Protector that she could stop asking questions which she denied.[8]

She eventually left the Wards, becoming an independent cape, operating on her own for roughly ten years.

She specialized in ruining reputations of career villains, and became an early example of such strategy.[9]

Mouse Protector was ambushed by the Slaughterhouse Nine at the behest of her old foe Ravager. After her death her body was given to Bonesaw who fused Mouse Protector together with Ravager and renamed them "Murder Rat".[10] This wasn't public knowledge.

The resulting aberration was subdued by Panacea[11] and finally mercy killed by Flashbang.[12]

More aberrations were created and destroyed.

Image by XeroKey on DeviantArt 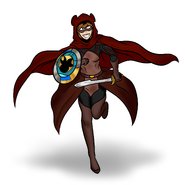 Depicted in concept as her post-wards self. 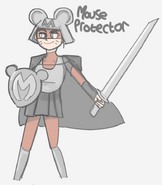 Art by Uberpigeon on Reddit.
Add a photo to this gallery

Retrieved from "https://worm.fandom.com/wiki/Mouse_Protector?oldid=53769"
Community content is available under CC-BY-SA unless otherwise noted.