Lou Joubert,[2] known to the world as Moord Nag, is a Namibian warlord and one of the most powerful parahumans in Africa, politically and otherwise.

Likely triggered while isolated and being controlled by another in keeping with the master pattern.[3] Her agency was likely taken from her in some way.[4]

Dismissive of human life, possibly linked to her partners need to feast on the dead. She looked forward to seeing well of areas of the world devastated by Khonsu.[5] She held to her word and thought that speaking English was beneath her.[6]

She treats Aasdier as an equal partner and companion.[5][1]

Took control of a huge section of Africa with only the help of Aasdier, and still held it after more than eight years. Local Warlords and groups paid homage to her when operating in her area.[5][1] She was known to have killed thousands of people, yet was still free.[7] She was recognized as powerful by other powerful people.[8]

Unlike many capes on Earth Bet, Moord Nag doesn't have a costume. Ordinarily, she keeps her hair in braids[9] and wears a t-shirt with the sleeves removed and the bottom half cut off and an ankle-length dress that is frayed at the edges.[10]

Moord Nag's power, near as anyone can tell, is an enormous living shadow named Aasdier that follows her around. It has an instinctual reaction to anything that could possibly harm her,[1][11] it bases this off of intent and it will even destroy attempts to investigate himself or his master.[9] Aasdier gained an ongoing expansion of pursuance and stature when it ingested humans, dead [12] or possibly alive.[13] Originally, he could fit in the palm of her hand[1] and was very weak,[14] by 2011, it was large enough for her to ride on. It switches out various skulls, including bovine, humanoid, avian, rodent, serpentine and crocodilian all scaled up to fit the size of Aasdier. It is unknown if these are added or a feature of Aasdier himself.

It is unclear if there is an upper limit to how powerful Aasdier can become and how many lives he can take to fuel and empower himself, each absorption usually only gives him an extra teaspoon of mass or so. Aasdier can, however, lose mass with certain failures on the part of his host or other monumentally damaging effects,[1][15] splitting or sectioning him apart is ineffective as he will simply reintegrate.[16] Aasdier further shows some immunity to space-time effects. Moord Nag requests five thousand lives as her price for fighting an Endbringer (with the implication being that Aasdier needs that amount to be strong enough to challenge an Endbringer) so she was confident that she could use that amount.[1][13] Despite being seemingly composed of smoke, Aasdier cannot go through walls, at least without destroying them first, the same effect that can kill people and bugs[9] and scour the body of Endbringers.[16][11]

Moord Nag's connection with Aasdier and by extension her shard are much like that of Breaker-type cape.[14] They have a deep bond of trust.[1]

Triggering as a young woman whose agency was taken from her, the woman who would become Moord Nag called for a corpse-eater made of shadows.[1]

With the aid of Aasdier, Moord Nag became the de facto ruler of much of Namibia with many smaller warlords paying her homage, a position she has held for eight years.[5] Now her effective territory extends past Namibia, well into Angola, Botswana, and even a small part of South Africa.[1]

Was called to a meeting following the emergence of a global threat and was already seated when the full contingent of Undersiders and their allies arrived. Weaver attempted to use her swarm to see if she had any weapons, Aasdier blocked and killed the insects. She listened as Doctor Mother thanked them for coming before she mentioned that people died every day. Teacher said that he had given her the ability to understand and speak English and that it wouldn't cost her anything to use it. She told him that she wouldn't speak it.

Moord Nag later rode Scavenger into battle against Khonsu. She stepped off Scavenger before it lunged at the Endbringer. Scavenger was trisected, but continued to wind around and tear into Khonsu's body. It attacked Khonsu's injuries, knocking him off balance, and then pushed Moord Nag out of the way of one of Khonsu's fields. Aasdier proved himself resistant to the fields' effects. Then, having enough, Khonsu teleported away from the battlefield to the next site. Aasdier was left behind.[11]

After her debut on the battlefield against the new Endbringer, the warlord was unsuccessfully targeted by her sibling.[18]

When The Slaughterhouse Nine-Thousand appeared Moord Nag lent her support to trying to stop Jack from bringing about End of the World. The extent and form of this aid is unknown and was ineffective in preventing the event regardless.[19]

Having survived the opening moments of the event, Moord Nag was contacted by Cauldron for another meeting. She was given an interpreter to tell her about the particulars of the conversation.[20]

Moord Nag later fell under Khepri's control and was used as part of a ploy for the goddess to capture Glaistig Uaine.[21] Khepri sent her into the front-lines alongside Alexandria and Legend as Ash Beast attacked Scion. Mere minutes afterward, she was pulled back and sent through dimensions to scavenge from the dead.[22] Moord Nag was then redeployed alongside other heavy hitters, relieving the force that had been fighting Scion. Sifara used his power to move Moord Nag closer only for Moord Nag to have a stroke from mental stress. This stemmed from Khepri's control being very similar to her trigger event.[4]

Khepri sent her to Panacea to be healed and, after the healer initially refused, sent the repaired warlord back out against Zion. However, the golden man was able to bash the pair away before Scavenger could reach full size.[23] In the final battle in New York, Moord Nag and Aasdier fought Zion side by side with Lung.[15]

Her location was unknown, possibly on a world with African migrants.

Was likely targeted for abduction by Teacher in his attempt to collect powerful parahumans.[24]

Moord Nag was seen among the elite circle of Teacher's Group.[25]

In the wake of Wardens assault, she escaped alongside Teacher to Earth Cheit.[2]

Illustration by DerTodesbote on deviantart 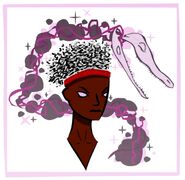 Retrieved from "https://worm.fandom.com/wiki/Moord_Nag?oldid=54065"
Community content is available under CC-BY-SA unless otherwise noted.