Worm Wiki
Register
Don't have an account?
Sign In
Advertisement
in: Articles in need of completion, Characters, Females,
and 9 more

The Protectorate
The Inaugural Wards Team

Shadow 5.8
Hannah,[1] also known by Hana or her superhero identity Miss Militia, was a member of the Brockton Bay Protectorate.

Hannah remained a very steady, rational character throughout Worm, contrary to most other parahumans.

She suspected that her power had taken the angriest parts of her, the most childish parts, the parts of her that dreamed, and those that forgot, and given them concrete form in her power.[2]

Skitter observed that she seemed like a person who followed the letter of the law rather than risk her job.[3] Triumph however noted that she was the leader of the Protectorate because of her unwavering loyalty and willingness to not only abide by the rules but to fight for them.[4] She didn't see any reason to complain about arbitrary difficulties, like having to spell her name a different way, compared to the hardships of her village. She genuinely loved the United States of America, although she recognized it had flaws, like anything touched by human hands.[2]

Miss Militia said that she preferred not to have to be the one to make difficult decisions, preferring to reserve her strength. She didn't want to be forced to take on a leadership role with its extra responsibilities.[5] Despite this Colin said that Hannah was a natural leader.[6]

She remembered what she saw during her vision , but believed she was the only one, having observed that other people would forget even if they briefly realized. She believed what she had seen was God, or possibly an angel, granting her her powers. She had resolved not to mention it to anyone, but she briefly suspected Alexandria or Dragon might remember.[2]

Miss Militia is one of the few capes that can get away with using guns.[7]

She considered Taylor Hebert intelligent and resourceful,[9][3] and in turn Taylor looked up to her.[10]

Dark haired and olive skinned, Miss Militia wears a scarf and sash around her waist patterned after the American flag, and stylized, fitted army fatigues[11] that accentuated her curves.[12][13] She has perfectly shaped white teeth, courtesy of American dentistry.[2] Miss Militia has bottle-glass green eyes.[14]

At some point following Gold Morning, she began wearing color-swapped versions of her military fatigues in red white and blue, with a hood for the cold that was "something between a hood and a scarf".[15]

As a Ward, she wore an urban camouflage tank top and a blue scarf, emblazoned with a shield emblem.[8]

Hannah's power is a green and black,[16][2] semi-sentient[11] blur of energy that can form into ordinary-looking weapons. She can re-summon the weapon at will, collapsing it back into energy.[16][17]

She can re-summon a weapon if it runs out of ammo, reloading it,[18][19] or if it jammed.[20] This made it easier to use nonlethal ammunition, such as rubber bullets.[21]

The weapons her power creates vibrate slightly, as if alive.[16] further the energy will flit about, taking the form of various weapons whenever she is on guard.[22]

Her power influences her ability to use the weapons, enhancing her draw time and aim, and subtly adjusting their balance.[23] She was able to accurately shoot a target's head and neck.[24] She claimed that she could re-summon her weapon from someone's hands and shoot the wielder before they could react.[16]

A side benefit of her power is that she doesn't need to sleep,[13][31][2], making her a Noctis cape[31] although she could if she wanted. Even then, she didn't dream, but instead replayed past events over and over in perfect detail. She rarely did so because of her traumatic past.[2]

Following the Shardspace bombing her power shifted in scale, as she was seen manifesting a gun-turret.[32]

Hana was one of seven children who were the only survivors of a small Kurdish[33][34][13] village attacked in 1985[1] by Turkish soldiers. She had her trigger event while she was being used as a human minesweeper by said soldiers. Most of the survivors were evacuated to the U.K., but when her power caused problems with the metal detector she ended up being rescued by an American and brought to the United States, where she was fostered and given a place in the Inaugural Wards Team,[8] and her name was anglicized from Hana to Hannah.[1]

She formed lasting friendships with many of her teammates. A few years into her time with the wards, Hannah had a short relationship with Chevalier. Beyond a few dates, however, they drifted apart, both being too busy with where their lives were heading.[8]

At some point, she worked directly under Alexandria and presumably the rest of the Triumvirate before she was located in Brockton Bay under Armsmaster.[35]

When the Undersiders attacked the gallery, Hannah was able to capture Regent but was unable to keep him contained. The Undersiders were able to escape.

Weeks later, Hannah had woken up from her annual sleep and was reflecting on her trigger event when she talked with Dragon and Armsmaster, learning she would be placed in command of the team and that Brockton Bay was about to be hit by an Endbringer.

She stepped into a position as leader of the Brockton Bay Protectorate, even though Legend was visiting with several members.

She joined the truce meeting between the villains to discuss how to deal with the Slaughterhouse Nine.

Rejected the Undersider/Traveler offer to turn over Shatterbird and Cherish to the heroes.

Tried to look after the young Wards and other Brockton Bay capes, Taylor delivered a letter to her covering her thoughts on their relationship.[10]

Created a huge explosive with her power, possibly with the aid of another cape, to try and slow down Scion.[36]

Dealt with a Broken Trigger and with the help of Vista talked with Bitch.[37]

Two years after Gold Morning Hannah was considered one of the Wardens' key members, and has her own statue in the HQs lobby.[38]

Following the incident she served as Wardens ambassador to Earth Shin, and garnered degree of personal respect from Shin leaders.[39]

Miss Militia traveled to Earth Shin alongside Breakthrough, Golem, and Vista. Despite her best efforts in negotiations with local leaders, Breakthrough and her subordinates were imprisoned for several days.

She participated during the assault on Teacher's Compound. At the end of it she was targeted by The Heartbroken and The Undersiders on Contessa's orders[40] to minimize heroes casualties.

Miss Militia cleared Victoria Dallon for action, but warned her about testing her luck further with the patience of the Wardens.[42]

She participated in the fighting against the Simurgh inside the Wardens' Compound.[32] 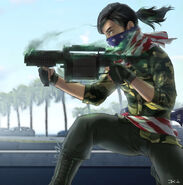 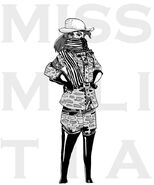 Image by zhaomeng on SpaceBattles. 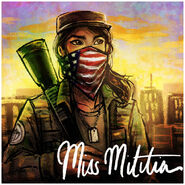