Start a Wiki
This is for the New York villain. You might be looking for the member of Gold Coin also known as Minakhm.

March, real name May, is a peripatetic villain, late of New York.

Was receptive to all of her mother's guidance and suggestions. She had several talents that she cultivated such as singing and instrumentation. as well as keeping things on point.

March is persistent and focused, willing to clash continually with Flechette while they were both in New York.[3] Has a bit of an off kilter of beat personality putting others on the wrong foot.

March does not treat cape-business as a career, but as a whimsical game.[4] This has led her to be viewed as inscrutable.[5]

Developed a long term interest in multitriggers,[6] and powers in general.

Once she was revived from her cardiac arrest she was deeply affected by the vision she saw and her long captivity. With her Tori, her crush, and Jan, her friend and colleague, March had to find her own way in the world.

She become very comfortable with killing people and has a showmen's flair to what she does.[7] She is the type to walk away and let people blow up behind her.[8]

Given her vision occured before Gold Morning and the destruction of the "Hub", her reasons for her blaise attitude towards death were empty.[9] Regardless it meant she was willing to engage is actions that had devastating consequences if it meant meeting her goals.[10]

Those who interacted with her for any length of time commonly considered her mentally ill.[11][12]

Her mother bent over backwards to give May a happy life and her daughter seemed willing to help out.

Friend and partner, March worked with Jan to satisfy her own new found curiosity and explore her own powers.[13]

March had an overwhelmingly unhealthy obsession with Foil.

Struck up a romantic relationship with Tori when she and Jan investigated the Smugglers cluster. Given the age difference nothing really happened until they were reunited years later. March was comfertable and open with her in a way she was with few others.

Intentionally surrounded herself with multitriggers[14] collecting them out and offering support.[15][6] It was noted that having her interest was not a good thing.[16]

Was willing to work with a frantic Rain based on his commitment to help her with her own vendettas.[17] This was partially due to his "objectivity" when it came to viewing said vendetta, she also gave him general life advice.[7]

March is a small Japanese-American woman who wears a military-style uniform and feathered cap, with a rabbit mask[18] that leave her eyes open.[7] She also carries a rapier[14] with sheath.

March is a Multitrigger cape which gives her several abilities. Her primary power is enhanced timing.[19] March's timing ability allows her to organise groups very efficiently, to the point where she can give the exact amount of time they need to accomplish their tasks and complete a given objective.[20] Further it is a huge help with her own fighting and positioning with which she can pull of seemingly impossible feats.[21][22] When boosted, time appears to slow for March, allowing her to make decisions on the fly.[citation needed] Her thinker aspect is strong enough to make her unreadable to other Thinkers, such as Tattletale.[16] An added benefit allows her successfully inject theatricality into everything she does. However it requires her to be knowledgeable about relevant factors, environment fitness parahuman powers etc. involved so timing can be worked out, otherwise she can be preempted and defeated.[23]

A dangerous secondary ability of hers lets March access a Perfect offensive weapon,[24] while it's a weaker version of her clustermate's power it still lets March cut through nearly any foes' defence.[25][26]

He other clustermates gift manifests as a watermark, spreading from its contact point until it detonates upon reaching its apex; a timed explosion.[21][27] It can interfere with breaker effects[27] and easily kill people just by applying the explosion effect sans any other damage.[28]

She also has some sort of accuracy power, which was Homers primary ability. It was similarly disrupted by spatial warping as her clustermates was.[29][30]

She is very good at intuiting connections for Multitriggers, given her past study[6] and possibly personal experiences,[31] such as getting a peek "backstage".[9]

March has used several objects over her career including a baton and many bladed weapons[23] she now carries a rapier she habitually imbues with her "sting' effect. She also includes various other loadouts based on the situation, including a sniper rifle[32] and several rubber balls she can charge with her power.[33]

May and her mother are refugees from Japan, her mother meticulously planned out and scheduled nearly all aspects of her life,[2] which May found oppressive.[34]

May was part of the same group trigger as Flechette, taking place around 2008 in New York.[35] May and her mothers got accidentally dragged on the rails by Lily's friends. May instinctively hide in the alcove, confusing her dazed mother, moment later train arrived and May triggered after realising results of her actions. In a seeming daze she proceeded to the scheduled audition. Her personality was notably altered as she resented the officials' concern for why she was instead of the scheduled audition.

Newly orphaned she used her equally new powers to slip away from her guardians, embarking on a dizzying spiral of drugs and partying.[36]

Later, she was contacted by Homer, the third cluster-mate, he provided some insight into their situation.

March became a bodyguard for a independent parahuman investigator. Together they tried to assist remains of smugglers cluster, and were captured by the most aggressive member alongside other clustermates. Suffering from blood loss, March experiences near-death visions, that reveal to her artificial afterlife and upturn her world-view. She gets resuscitated by Cauldron rescue team.

Driven by her newfound obsession with Flechette March returned to New York. She repeatedly joined minor villain groups that were targeted by the wards. But her habit of escalation and brutal efficiency forced her to move on, as those groups quickly deemed "unsafe" to engage for the Wards.[4] She gained an eclectic criminal record, unattached to any particular operation.[37]

March visited Brockton Bay when the portal went up, twice. The second time she kidnapped Parian. All to get at the newly renamed Foil.[38]

At the same time she had run-ins with local Brockton Bay heroes and presumably other native parahumans.[39]

Likely had a similar experience to other Parahumans.

March was able to survive Gold Morning and started seeking out other cluster capes. She reached out to the recently triggered of5 and offered information and assistance with their unfortunate group trigger dynamic.[40] Unknown to Rain she had also tried to recruit his Clustermates as well, though they seemingly rejected her ocertures.[15]

Rain was reluctant to reach out to March given how much of an unknown she was to him.[41] The Runt, finally reached out to March when he had nowhere else to go He met her and her team at her hideout in the city.[42]

Later they deployed against the Fallen, separate from the Hollow Pointers and Wardens.[15][18] She personally apprehended Mama Mathers and killed several Fallen members. Following the Thomais Family revealing themselves March hung back to see how things played out.

After a quick side chat with Parian, March decided that that her team would leave.[43] It is not known if she lingered in the area.[44]

The Balance of the The Mall Cluster reached out to March and her group after their surveillance showed that that was exactly what the new alliance of Breakthrough and the Undersiders didn't want them to do.[47]

Assault on the Time BubblesEdit

As part of a larger game Teacher and Cradle were independently playing,[11] she was focused on her own objective however.[48]

March hired some powered mercenaries from Deader and Goner and visited with her army the ruins of Brockton Bay. She recovered Ixnay's clustermate - Jotun, casually killed several defending heroes, and unleashed three broken triggers, including Dauntless.[49]

The next morning, she was tracked down and eventually killed by Foil, some ungrateful kid and Imp.[50] 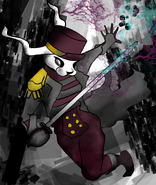 Retrieved from "https://worm.fandom.com/wiki/March?oldid=55922"
Community content is available under CC-BY-SA unless otherwise noted.