Worm Wiki
Register
Don't have an account?
Sign In
Advertisement
in: Articles in need of cleanup, Characters, Males,
and 5 more

Parasite 10.6 (description)
Interlude 11d (1st appearance)
Mannequin is a member of the Slaughterhouse Nine, and all that remains of the benevolent Tinker known as Sphere.

It should be noted that "like other serial killers, Mannequin favored certain types of people as victims. His prey of choice included Rogues, those individuals seeking to make a profit from their abilities, especially those looking to better the world… and tinkers."[4]

He had something of a deathwish, which led him to attack powerful opponents.[5]

Although he was unable to speak, Mannequin had a variety of methods for communicating: he could, for example, spell out words or use sign language to get his meaning across.[6][7]

It is unknown what Mannequin looked like before he cocooned himself in his new 'Mannequin' body. Now, however, he survives in an ecosystem of his own creation. His body is made up of several 'pieces' which seem to be able to operate independently of each other. They are attached with chains or ball joints; his shoulders and hips are ball joints, while his lower arms and, presumably, lower legs are attached to chains. These chains are capable of extending and retracting, to devastating effect.[8]

He is 9 feet tall; his head scrapes the ceiling of an average sized room. Furthermore, his head has "no eyeholes, no earholes, nor any vents for air intake. There was only a head as white and smooth as an eggshell, with shallow indents where the eyes and mouth should be and a small bump for the nose."[4]

It is noted that anyone who looks at Mannequin before the two halves of his chest come together can see the organs that are inside of him. The right and left side of his body, which appear to be able to work independently of each other are "cut cleanly down the middle"[4] and the organs inside of him "pulsed with activity, throbbing wet against the glass or glass substitute.[4]" It is also noted that there is a substantial amount of technology keeping him alive, "regulators and filtration systems, and other gear that was designed to fit into the gaps between the most vital systems."[4] His carapace was durable enough to resist his own blades.[9]

Skitter speculates that each part of Mannequin's new body is "a self-contained system,"[4] with "everything nonessential stripped away and replaced."[4] This appears to also include Mannequin's voice, as he uses keys from a keyboard to communicate with Armsmaster. Due either to the trauma he suffered or his own body modification, people who sense emotions have a hard time tracking him.[3][10]

He is also bristling with 'weapons' and 'tools'; however, they seem to 'seamlessly' flow into his body, making it almost impossible to see the number of weapons he has. Among other weapons, he has a "telescoping blade" that comes out of the center of his hand that can be 'speared' forward as well as retracted so quickly that it causes recoil in his forearm and hand. Further, he can swap out any of his tools for other materials to deal with the situations at hand. He likely has replacement materials for his body for whenever he is seriously injured;[11] that Bonesaw had enough of technology to assemble a 'Sarcophagus' makes this highly likely.[12][13][14]

This repair ability has served him well in the Slaughterhouse Nine, with its high member turnover rate. It was mentioned several times by different people that Mannequin is one of the Nine's longest-serving members. Bonesaw mentioned once that she could count the members of the Nine that lasted more than a few years on one hand with fingers to spare, with Mannequin being one of them.[15][16]

Every one of Mannequin's joints is flexible, "capable of moving in every angle"[4] and his fingers are described as "like worms, each knuckle bending in impossible directions."[4]

Mannequin's ability is described as a "tinker who specialized in sustaining life, sheltering it from outside forces; forces that included water, weather, space… and bugs." After the death of his children and wife, he changed from trying to protect others to "using his power to help and protect himself and himself only."[17] The modifications he performed on himself separated him from his humanity forever, inside ceramics and systems that would keep him a mockery of life for millennia.[3][14]

As a tinker, Mannequin can retain the benefits of his technology even if his powers are suppressed, but he grows noticeably less coordinated using it.[18] His entire makeup allows him to operate easily in especially hostile environments.[19] The mechanical nature of Mannequin's movement effectively makes him tireless as long as the systems hold out.[20]

Due to being mostly modular, his fighting style is never quite the same twice, and his flexibility and many weapons give him a lot of options. He used a different configuration with each confrontation, approaching a problem from different angles and rapidly finding out how to defeat his opponents.[21]

After his rebirth, Mannequin started traveling the world as a serial killer, targeting predominantly Tinkers[19] and Rogues who sought to better the world with their powers as his targets.

He attacked the Moonwalkers in 2007 in an ongoing campaign to seemingly wipe out his former legacy.[26]

Eventually, he joined the Slaughterhouse Nine and has been with them for an unknown amount of time, though it has been several years.

Mannequin came with the Nine to Brockton Bay. He nominated Armsmaster, a fellow tinker, who he visited in holding by climbing through the air vents and injured him just enough to make a point.[4]

Possibly spited by the unusually low death count of Shatterbird's attack as a result of Skitter's involvement, Mannequin sought the young villain out.[27][28] He attacked her in her territory while she was providing medical treatment to Shatterbird's victims. Skitter swore to make him pay.

Fleeing, he later met up with the other 7 members and was rebuked for his failure.[30] The morning after, Jack posted the rules of the Nine's visit to Brockton Bay, and Mannequin was seen lurking at the edge of Skitter's territory.[31] Later that day, he ambushed the Undersiders and maimed Panacea while she was meeting with the teenaged villains.[32] He attacked Skitter's territory again with a toxic gas, orphaning several children. The Undersiders overwhelmed him, and he forfeited his turn to Burnscar so she could kill them.[33]

When the Slaughterhouse Nine were cornered by the combined protectorate team, Mannequin fought with Weld.

While fighting the Wards, Mannequin and Crawler were immobilized in a trap of Clockblocker's.[34] He was killed by Bakuda's bombs utilized by the PRT and turned into a glass sculpture.[35]

Triumph later visited the two statues in the Scar.[36]

Several clones of Mannequin appeared as members of the Slaughterhouse 9000, along with a hybrid clone of him and Winter called Snowmann.

Though they were grown and programmed by Bonesaw, his clones carried out the body modifications themselves.

One instance of Mannequin survived to Gold Morning and was captured by Khepri.[37] 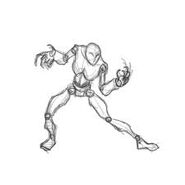 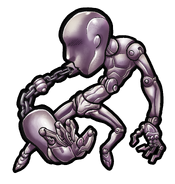