Leviathan (pronounced: "leh-VY-uh-than") is one of the Endbringers. He is the second of the Endbringers to appear, making him the "middle child" between Behemoth and the Simurgh. Despite not having as much sheer power as Behemoth or being as intelligent as the Simurgh, he is still a very destructive and dangerous threat that is far more intelligent than he appears to be.

Leviathan is thirty feet tall with a seemingly disproportionate body and scaly green skin. He has a top-heavy appearance due to his hunched shoulders and the large cords of muscles standing out on his neck, upper torso, and shoulders. The top-heavy appearance is only strengthened by his much thinner forearms and calves, topped off with massive claws and digitigrade feet. At the rear end of his body is a prehensile whip-like tail around 40-50 feet long.[4] Leviathan weighs nearly nine tons.[5][6]

His face lacks any kind of mouth, nose, or ears, with the only features being four cracks containing glowing green orbs that resemble eyes. These eyes are placed asymmetrically, with three on the left side of the face and one on the right.[4] At some point, Leviathan seemingly developed a fifth eye.[7] This eye appeared due to battle damage.[8]

When walking on two legs he sways his upper body back and forth in sync with the swaying of his arms, using his tail for balance. However he is far more balanced and significantly faster once on four legs, fast enough to run on the surface of the water. Within water he moves faster than any speedster, almost appearing to teleport. He leaves an "afterimage" of water whenever he moves, equivalent to the volume of whatever body part is in motion, perpetually shrouding him in water.

Leviathan's main power (and by far is his most powerful) is the manipulation of water on a massive scale. He often preludes his arrival to his target with a torrential downpour and a tsunami, which he continuously creates throughout the battle. Each one of these waves is more powerful than the last, eventually becoming powerful enough to topple entire buildings. The frequency of these is dependent on whether he is able to focus his ability on them, meaning a sustained attack can delay them. He often uses these to cripple strategic areas like evacuation centers or and smaller ones to change the balance of the battlefield if he begins to lose the advantage.

However the true strength of this ability is to create extreme amounts of water pressure and movement in unseen places such as underground aquifers or coastlines. If not stopped soon enough he can create forces tremendous enough to collapse cities or even sink entire islands as seen with the complete destruction and disappearance of Newfoundland and certain parts of Japan.

The only weakness to this ability is that it lacks fine control. When working with relatively small amounts of water the best he can do is create shield-like geysers or send smaller waves to throw off opponents. This means he can't do things like manipulating water within the body or pinpoint high pressure drilling.

Along with his hydrokinesis, Leviathan has an "echo" of water that appears whenever he moves. For any body part moved, voluntarily or being attacked, water will appear seemingly out of nowhere to fill the space in the air where that body part just was. This water will maintain the speed and direction of the area that created it, even if the movement of that area changes. For example if he whips his tail then quickly stops it, the water produced from that movement will continue forward at the same deadly speed as the tail was moving (something he uses to greatly increase the range of his attacks). Normal physics still apply to this water and it can be manipulated by him afterwards.

Leviathan also possesses the ability to move at extremely fast speeds, allowing him to move around the battlefield faster than most heroes can retreat and rapidly dodge the slower ranged attacks. Dodging his attacks is nearly impossible given how fast he can move. Combined with his other two main powers he can flood the battlefield with his after-echo very quickly and run on the top of the water when it's too shallow to dive into. Once submerged though these combine to allow him to move at speeds so fast it resembles teleportation. This is unrelated to his hydrokinesis.[9]

Following the Simurgh's upgrades to him in Gold Morning, Leviathan gained fins, which are just as tough as the rest of his body. They also sport nano-thorns, a blur of microscopic blades stolen from Defiant's design, which turns things to dust on contact. This is the reason the water around him turns to mist with the fins unfolded.

Leviathan has the standard Endbringer powers as well. These include extremely durable skin, stronger than tungsten flesh only 6% towards the core, regeneration that only quickens the deeper the wound is, massive strength, great intelligence, and a core so dense that it breaks the laws of physics.

On June 9th, 1996 was the first appearance of Leviathan. After 5 consecutive attacks by Behemoth over the past 4 years this most likely caught defending forces off guard. Other than that few details are known.

Another attack was in January 18th 1998 in Sydney, Australia. The city was rebuilt using international funds allowing for urban renewal.[10]

His sixth attack, on the night of November 2nd, 1999 continuing into the morning of the 3rd[4], Leviathan surfaced at the southernmost island of Japan, Kyushu, while pummeling the entire country with tsunamis. In a display of intelligence he strategically cut off and destroyed evacuation efforts. This attack was incredibly devastating as most of Japan's native heroes were killed along with 9.5 million civilians. The battle finally ended when Lung fought him to a standstill and he collapsed Kyushu as he retreated. 3,000,000 evacuees were left homeless and Japan was effectively reduced to a third world country.

No details on this battle were revealed except that that it took place on July 6th, 2001. The interesting thing is though is that Hyderabad is over 217 miles inland from the Indian Ocean. But upon closer examination there is a route to the city from the ocean. Leviathan would have had to snake his way up the Krishna River and the Musi River, the latter of which is barely 10 feet deep in some places, requiring tremendous effort just to attack this one city.

On May 9th, 2005 Leviathan began an attack on the Canadian island of Newfoundland. However the defending heroes once again didn't stop him soon enough and he managed to sink the entire island, killing half a million people[4], including Andrew Richter. From this point on his targets were classified as hard, meaning heroes could stand their ground and gradually wear him down, and soft, meaning he must be attacked quickly and not given a chance to build up his attacks.

At the end of Buzz 7.12 a program designed to predict Endbringer attacks anticipated his arrival in Brockton Bay. Air raid sirens were activated to alert the public and allow them to evacuate to the local Endbringer shelters. Meanwhile every major Protectorate and Wards group on call began arriving via teleportation along with a few villains. They joined local capes, including Skitter and the Undersiders.

The attacks by Leviathan from his appearance up to 2011 had had global consequences.

Attacks on sources of fresh water has led to a water crisis.[11][12] The shipping industry was hurt, although not entirely extinguished, by his (and to a lesser extent the other Endbringers') attacks on port cities.[13]

Leviathan's devastation of Kyushu led to particularly dramatic consequences. Japan was no longer a world power, and was dependent on international assistance as of 2011. The wave of refugees caused minor unrest around the world. Many settled in the United States of America, where President Bradley passed a Preservation Act that helped them.[11]

His attacks on Sydney and Newfoundland, which left them unrecoverable, also had wide-ranging effects on the world.[11]

Following the destruction of Behemoth, Leviathan would start to adapt hit and run tactics, attacking several targets at a time.

Around the same time Tattletale "recruited" Simurgh, Leviathan joined the fight against Scion too. Leviathan was first "assigned" to go to a city created and controlled by the Elite through the powers of one of their members to destroy it. Within an hour he had demolished and flooded the entire city with his after-echo and a torrential downpour, killing almost all of the Elite present.

When Skitter's group arrived he was resting on top of one of the skyscrapers. Once Simurgh arrived in the area she immediately slammed into Leviathan and stabbed a long black blade she had built into his core. They remained frozen in place at the top of the tower until she let Leviathan crash to the ground. It soon became apparent that she had upgraded him with the sword as he sprouted collapsible nano-blade fins over his body. A serrated growth of fins sprouted along his spine and tail, ending in a bulb of blades at the tip. Several more grew along his neck and up the length of his forearms.

During the final battle he managed to fight Scion head-on for a little bit before he retreated. As the battle moved over the ocean he took to suppressing the tidal waves caused by it as he regenerated. At the final staging area at New York, Earth Beta, he took Scion on directly with the support of the other Endbringers. However Scion still managed to tear open his chest and obliterate his core with a sphere of golden light, killing him instantly.

Image by AznFailureGuy on DeviantArt

Image by kuraitormentus on DeviantArt

Image by keladry0alanna on DeviantArt

Image by drunkfu on DeviantArt 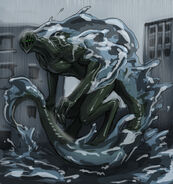 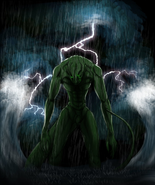 Illustration by whos to know

Extermination by Blasterweave on Deviantart

Retrieved from "https://worm.fandom.com/wiki/Leviathan?oldid=61188"
Community content is available under CC-BY-SA unless otherwise noted.