Flare 2.1 (Mentioned)
Interlude 9
Legend, civilian name Keith,[2] is the leader of the Protectorate[3] and the New York Protectorate team.[4] He is second in command of the Wardens after Gold Morning.[5]

Legend is probably closest to the classic superhero that Worm offers, heroic, noble, and willing to make sacrifices for others.[citation needed] As part of the leading heroes of the Protectorate, Legend is seen as a paragon of what a hero should be, acting on and off the camera largely the same.[6][7] Legend is gay, married for six years,[8] and he is the reason gay rights have progressed much further on Earth Bet than on our Earth.[9][10]

Legend is charismatic with presence and clout;[11] he has the kind of voice you wanted to listen to.[12] Many people felt like they wanted to be better for their next meeting with him.[13]

Teacher believed Legend, when frustrated, would bide his time and seek dialogue.[14]

Legend has wavy brown hair[15][16] and a square jaw.[17] He is tall, with a lean, muscular physique.[18] He is considered noticeably attractive by Skitter.[17] Towards the end of Worm, the emotional toll has left him looking ten years older.[19]

He wears a skintight sky blue[20] costume with white lightning/flame designs.[17] His costume includes boots and white gloves.[18] His mask is blue and silver/white, and leaves his mouth, chin, hair and some of his forehead uncovered.[20][15]

As befitting a member of the Triumvirate, Legend is one of the most powerful parahumans in North America. He is considered the epitome of 'flying artillery' capes:[21] he can fire powerful lasers, fly, and endure strong attacks with his energy form.

His lasers were primarily blue-white.[22][23] These beams can turn corners, fork into multiple lasers, pass through walls, and freeze or ignite his targets. He can use different effects, creating cutting, disintegration, impact, heat, focused, staccato bursts, fat lasers, and invisible lasers. He could combine these effects, but this took time to investigate and he rarely faced threats that necessitated the needed effort.[24] The 'freezing' laser actually lowers the temperature at the point of contact, damaging the target and freezing ambient moisture.[24] The 'heat ray' that ignited a target works on a similar principle.

A known strange feature of his lasers is that they can bend around corners.[25] This versatility extends to him splitting lasers he's fired into multiple smaller lasers.[26] Further, he can radiate an unheard of number of his lasers when he needs to. He can increase the size and power of lasers but requires time to do it.[27] His raw firepower has been favorably compared to Purity[21] or a battalion of tanks.[18] Although the time frame is unknown, Legend managed to deter Sleeper by leveling around 30 km2 of city.[28]

Spatial distortions can affect Legend's lasers. The Impaler Titan could redirect his lasers into his allies with the support of Titan Fortuna, causing Legend to disengage.[33][34] The Yàngbǎn-assisted squadron of the Taught could slap his more powerful lasers aside by creating distortions in the air that redirected them into the atmosphere or towards his allies.[35]

Legend can accelerate to a speed that exceeds the speed of sound and continue accelerating, to no hard limit. However, surviving at these speeds requires the use of his secondary Breaker ability.[36] He was one of, if not the, fastest heroes alive. On one occasion, he flew halfway around the planet in an extremely short period of time, seemingly a matter of moments; arriving a full five or six minutes before even Alexandria.[37]

Legend's breaker power changes his body to living light. As he becomes more like light, he is able to fly faster and ignore most attacks, though it impairs his ability to think. While in this state, he absorbs most kinds of energy, using it to repair his human form.[38] This transformation happens instinctively to avoid injury, usually when he is struck or when he flies too fast.[36] It allows him to survive in time dilated environments without food or water by absorbing ambient energy sources.

Still, attacks from Behemoth,[39], Leviathan,[40] Siberian,[36] and Skadi[41] have all been devastating enough that they were sufficient to take him out of the fight.

As a related minor power,[36] he has perfect, superhumanly clear vision,[42] only blocked by things like solids and gasses like cloud and mist. He took advantage of this by learning to lip read,[43] and to shoot accurately over vast distances.[44]

Legend received his powers as part of Cauldron's program, becoming a founding member of the Protectorate. He was present for Behemoth's emergence in 1992.[45] After Hero's death, he became the leader of a smaller team based in New York.[46]

When Leviathan approached Brockton Bay, Legend took the opportunity to inform every parahuman there of the odds of survival.[47] This was something that he, as a veteran of such engagements, was rarely able to do.[48]

Despite the risks to both himself and the citizens of the city, he deployed with his team against the Slaughterhouse Nine when they came to Brockton Bay.

He recognized William Manton and confronted his co-conspirators, secretly armed with a lie-detector. He discovered that they were responsible for the Case 53s and had been lying to him for years.[49]

Despite knowing that his teammates had been lying to him for years, he repeated the same lies to Gully and Weld given the gravity of the situation the Protectorate faced.[50]

He was able to keep two Alexandria clones busy during a fight, but that also meant that he could not help When Echidna and her creations were fighting the others.

Legend stepped down as leader of the Protectorate after his ties to Cauldron were revealed.[51]

He was briefly trapped in accelerated time by Khonsu, but survived by entering his breaker state. By the time the Endbringer dropped the effect, an enormous charge of light had built up inside it. This charge was redirected by Eidolon.

Chevalier asked Legend to become his second-in-command in the new Protectorate after Revel's death, and he accepted.

He served throughout the event.

Was a part of the Wardens when the group was announcing themselves to the city. Welcomed the new member Valkyrie.

Two years after the event he still part of The Wardens. Just as in the Protectorate he is considered one of the groups key members, and has his statue in HQs lobby.[52] He, however, is not occupying the decision making position.[53]

Survived the portal sabotage, but evaded public appearances due to being preoccupied.[54] He was seen at Wardens' base at Cote D’Ivoire.[55]

Legend led one of the Wardens' attack-groups on Teacher's Compound.

According to Teacher's precognitives, if the Wardens were defeated too obviously, Legend would lay siege to the Cauldron Compound that was taken over by the Taught and tear it down with enough time.[56] Thus, Legend's attack-group was being stalled by Yàngbǎn-supported thralls just outside the building.[57]

Tress, Lookout and one of Harbingers were able to break the stalemate by crashing the Dragonslayers's mechs into the thralls.[58]

When Teacher escaped, Legend was teleported away alongside him.[59]

He rallied the remaining parahumans of the city against the Titans.[60]

Legend was wounded in the later fight with Titan Skadi.[41]

He fought Titan Fortuna, dealing the massive damage to her, which helped her to initiate the further spread of the dimensional tears.[61] The newly-produced Impaler Titan was also able to turn his attacks on his allies,[33][34] so Legend resorted to fighting the newly arrived Ashen Titan.[62]

He was severely wounded in the later fighting, up to the point that he was stuck in his regenerating form while being present on the Machine Army front.[63]

Legend fought the Simurgh[64] and pursued her, after she fled from the Wardens' Compound.[65] 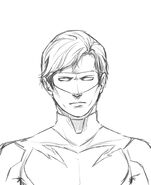 Legend vs Behemoth by DerTodesbote