Crystal Eve Pelham is the daughter of Neil and Sarah Pelham, the older sister of Eric Pelham, and a member of New Wave.

Did not keep her room clean at all.

Crystal is described as attractive looking with a heart-shaped face, full lips and blonde hair.[2]

As Laserdream, Crystal wore a white costume with a stylized arrow pointing down and to her right with half a dozen lines trailing behind it, over her left shoulder, with similar rows of lines trailing down her legs and arms. She also wore a ruby red hairband that gave her a coquettish sweep of hair over one eye.[3] [4]

Crystal has a powerset almost identical to her mother - flight, energy beams, and forcefields[2] - but with weaker shields in exchange for more powerful beams and flight.[5][6][7]

She could fire crimson beams of energy. Her concussive blasts were judged strong enough to affect Leviathan.[4] One was sufficient to break his grip on her.[5] With continuous fire, she could use them to clear rubble.[4] She could fire them from her hands,[5] or shoot a fan of beams from her fingertips. She had enough fine control to burn a design into clothing.[8]

She could create crimson forcefields,[9] [4][8] but they were relatively weak compared to those made by the rest of her family, capable of being broken when she kicked off against them[10] and dragged around and popped by Leviathan.[5] For example, she could make a spherical forcefield around herself and a partner,[4][5] a square forcefield to support herself and a partner in midair,[11] or a small forcefield to keep her own lasers from going too far.[8][12]

Her flight is fast compared to her family, and mostly limited by her own tendency to get motion-sick.[13]

After The Firmament bombing her laser and forcefields became stronger, but less precise in application.[14]

Crystal triggered sometime before 2009, she was the first of the New Wave kids to gain powers. It happened when she was recognized as the daughter of heroes in the city, and was chased and, presumably, assaulted, as a result.[15]

Panacea once overheard Laserdream being told about villain psychology by her father, including Marquis as an example of "pattern" killer.[16]

Laserdream appeared alongside Lady Photon and Glory Girl in a fight against Purity. Crusader and Rune ran interference, distracting and trapping Laserdream so that Purity could attack them.[2]

Laserdream accompanied New Wave to the meeting place after Armsmaster and Dragon's program predicted that Leviathan would attack Brockton Bay. She sat with her teammates next to the Brockton Bay Wards, but didn't join in with the conversation the Wards were having. She then listened to Legend as he told them about what was going on before he began to divide them into teams.[17]

Sometime later, Laserdream opened fire at Leviathan alongside Legend, Lady Photon and half a dozen other capes. After Leviathan struck down Legend with his tail, Leviathan reached for Laserdream and Shielder. She created a forcefield bubble around them before Leviathan's tail wrapped around it and brought it down towards the roof. Halfway down, the constriction of the tail broke through the forcefield before the tail wrapped around Shielder's body and Laserdream's arm.

Laserdream managed to use the concussive force of her laser to break her way free before she flew up and out of the way as Leviathan fell. Shielder was unable to escape and, after Leviathan brought down his upper body against the edge of a building, she screamed raggedly.[5]

Skitter then started to direct Laserdream towards where Leviathan was. Laserdream erected a forcefield over the both of them when they passed over a gas station. She changed course sometime later and, when Skitter asked her about it, she told her that the wreckage headed that way. Skitter told her that Leviathan might have been faking it out and then pointed towards where she thought Leviathan was. Laserdream changed course again and arrived at the scene a few seconds later.

Laserdream dropped Skitter at the fringe of the battlefield with the halberd and joined Purity in firing lasers at Leviathan's chest and face. Leviathan prepared to lunge only for a wave of darkness to envelop him and then dissipate, leaving only what was necessary to obscure his head. Laserdream managed to hit Leviathan again before he figured out how to escape the darkness.

Later, Laserdream grabbed the halberd, heaved Skitter out of the water, changed her grip and pulled her up and free of the waves. She hurried away from the growing depression and towards a nearby roof where she laid Parian down. When the building started to collapse, she reluctantly grabbed Skitter and Parian before hauling them back into the air.

Skitter asked Laserdream if there was another tidal wave coming and Laserdream told her she couldn't see her armband to check unless she dropped her. She asked Skitter if she wanted to drop her before flying the three of them away. She then told Skitter that she was going to set them down and, when Skitter questioned her, told her that she would set them down or drop them because she couldn't hold them for much longer.

After setting Skitter and Parian down, Laserdream checked her armband and told Skitter that one of the shelters had sprung a leak. Skitter told her to bring her and that, while she knew her arms were tired, they had to stick together and that she could drop her if she had to. Laserdream agreed, but said that they were leaving Parian behind. She then picked up Skitter and towards the shelter that had sprung a leak.

Laserdream started to blast the door to the shelter with a laser after a nearby cape told her to open it. She ceased firing after the cape that Skitter had given the halberd to headed towards the door before she started to make channels where the water could flow into once the door was opened. When the door was opened, Laserdream told the people inside to get out. She was then knocked unconscious by Leviathan.

Skitter later found Laserdream, turned her over and checked that she was still breathing before she left her. They were teleported out together.[4]

Check up on cousin, which found herself on the receiving end of anti-cape sentiment.[18] They later discuss their life situations, state of civilization and make some plans.[19]

Was at the Dallon's house during a disastrous family reunion.[20]

After her cousin Victoria lost her job, she put up at her apartment. Which was overly full of stuff.[21][22]

Was patrolling the city during a labor riot and dealt with a disastrous Broken Trigger[23] took a while to recover from the emotional trauma of the event.[24]

Said she was likely going to rejoin the PRTCJ.[25]

Gets to do some secret missions.[26]

She was making tours of duty in northwestern American states, and Russia.[27] She was at The Wardens base in Cote D’Ivoire, where she managed to annoy Valkyrie.

Welcomed her cousin back from Earth Shin.

Crystal was among the Wardens' reinforcements who were sent to Teachers Compound.[28]

She was assigned responsible over Victoria's probation.

Crystal reunited with her mother.[29]

She was invited into the Wardens' situation room during the second Shin crisis to help with her family.[30]

Crystal appeared in the Wardens headquarters after the ice broke.[31]

She fought Titans together with her mother-clone during the defense of the Shardspace entry-point, briefly accompanying Victoria Dallon,[32] and saving her from Nemean Titan.[33] Crystal was, also, in the way of Titan Fortuna going to Earth Shin portal.[34]

Crystal was "doing outreach" while Victoria's plague was deployed.[35]

Crystal temporarily joined Erring Right together with her mother.[36] 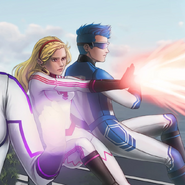