Elle, known publicly as Labyrinth, is a member of Faultline's Crew.

Like others with powers manifesting at an early age, Elle's ability obfuscates her personality. Though many may initially label her as a low functioning autistic, she is far more astute and cognizant than she first appears.[2][3]

Elle needs to actively explore the worlds she connects to and creates, in order to be able to draw objects and structures into her current reality, therefore she does not come across as lucid to others. This ties in heavily to her emotional state, playing a factor in how much time she decides to spend looking through her world. The worlds she finds and creates vary based on her mental state.[4]

During these explorations or 'Bad days' her power is functioning at its peak and as such she usually doesn't speak. She has a strange appreciation of architecture.[5]

Labyrinth is a girl who wears a simple dark green robe with a maze drawn on it and a mask.[6][7] Out of costume, she has platinum-white blonde hair.[8]

It is possible that she had not yet hit puberty.[8]

Labyrinth is an incredibly powerful Shaker, the ability to alter her surroundings at will gains her a Protectorate rating of 12.[1]However, her power comes with several limitations. While moving beyond the boundaries of her power, her range decreases to only a few feet around her; she must remain still for it to extend to its full reach.[3] Further, her power's scope changes in response to her lucidity. The less lucid she becomes, the faster she is able to affect the world around her. This limits her ability to communicate with her teammates and reduces their overall effectiveness.[8][9] She was not always in full control of her power.[9][10][11]

She describes them as pocket worlds, realities that could be influenced by her mental state to take differing forms. She was not restricted by any concrete number but the effort involved in creating a new world was prohibitive next to the cost of building on what was already created. Some of her worlds reflected her self loathing while others were for successes.[4]

When her power is operating well she could cover an entire mall with her effect.[12] Further,[13] she can "anchor" people[14] to be excluded from the worlds she brings in, letting them see and pass through any obstacle she has created and rendering them oblivious to her power.[9][15] Items she created with her power were sometimes more fragile, as a result of partly existing in two worlds at the same time.[10]

As a required secondary power, Labyrinth has the ability to sense and manipulate the interaction of various dimensions.[16][17][18]

After triggering, Labyrinth was put into a Parahuman Asylum on the east coast where she met Mimi, later known as Burnscar. They formed something of a one sided attachment with Elle being used by asylum attendants to control Mimi.[9] Elle would later say that she didn't enjoy her time at the asylum.[2][19] Elle was inadvertently broken out of the asylum by Faultline's crew, who were originally there to find information on the Dragonslayers.[20]

At some point, she underwent therapy with Faultline and a hypnotist, who helped her to construct a world other than a nightmare for the first time.[4]

She deploys against the ABB drug den where she shows her capabilities, helping to disable Oni Lee. She shows concern when she learns that Newter has been injured.

She later retreated into the sewers with Newter after the successful raid, Newter holding her share of the money.

She participates in the assault on the Merchants.[21] Her power was functioning at or near its peak, She turned what had been a mall, devastated by Leviathans attack, into a structure worthy of her cape namesake.[22] She was able to anchor Gregor against her abilities for additional effectivness.[15][23][24]

She would later be paid a visit from an unwelcome friend. But her friend would leave without too much trouble after Labyrinth flooded the street with her power.[9]

During part of the team's investigation into Cauldron, they traced a former Cauldron associate who had worked at the Asylum with her. She then worked in conjunction with Faultline to breach the Madison Quarantine.[25]

She was there when a women in a formal suit attacked her team. She had a knife stabbed through her hand.[26]

She created quite a few portals and statues, in many parts of the world. There were roughly nine by the time that an important meeting was called.[27]

Was instrumental, in more ways than one, in the final hours of the Gold Morning.[28] 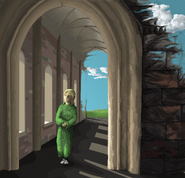