Worm Wiki
Register
Don't have an account?
Sign In
Advertisement
in: Articles in need of completion, Males, Tinkers,
and 7 more

Heavens 12.none (Flashback)
Interlude 15.z II
Chris, known publicly as Kid Win, is a member of the Brockton Bay Wards.

Chris has attention-deficit disorder and dyscalculia. His focus shift from projects, often leaving most unfinished. He respects Hero to a very high degree, modeling himself after him. Legend stated that he has a unique ability to connect with the public, compared to the rest of his team.

Chris has brown hair and a pale complexion. As Kid Win wears body armor colored red and gold, with a red visor.[4] Later in his career he would reconfigure his armor for greater variability.

After the resurrection he has golden hair and multiple cyborg- or breaker-like alterations to his body,[5] including gold-glowing eyes made of red metal.[6][7]

As a Tinker, Chris has the ability to understand and invent things well beyond the current level of technology. He originally believed that he specialized in advanced guns[8][1], though he later figures out that his specialty is modular devices.[2][9]

Kid Win was diagnosed with ADD and dyscalculia before he gained his powers. Although he resisted the ADD diagnosis, he couldn't deny the dyscalculia. He became even more distractible after gaining his power.[15]

A year and a half before the Sentinel arc, he was in a similar position to where Chariot was when they met - scavenging for resources, fiercely protective of what tech he could manage to create.[16]

Eventually, he joined the Brockton Bay Wards, and had access to far more materials.

With great difficulty, he managed to create a hoverboard, driven by the thought of how awesome it would be to fly.[17]

At some point, he was prescribed medication for his ADD by the PRT's doctor. During the two weeks he was on it, he found himself vastly more effective, and constructed a powerful Alternator Cannon. He was forced to stop because of adverse side-effects.[18] He didn't have a chance to run it past the PRT military and science teams.[19]

Deployed the Alternator Cannon, meant for an A-level threat, against a group of super-villains to stop them robbing a bank. He got into trouble because it hadn't been cleared; he underwent a disciplinary review and Piggot confiscated the power source.[19]

The Alternator Cannon was deployed and destroyed in the Battle against Leviathan.[18]

He dismantled his hoverboard to turn it into a harness with floating, reconfigurable turrets but grew frustrated with a snag in testing.[17]

A week after the Leviathan fight, he helped the Wards fight the Travelers, the wards lost. He deduced that the Slaughterhouse Nine were in town, and learned that Chariot was an infiltrator.[20]

Participated in the action to stop Coil's strike on the debate. Tried to disarm the sabotaged power source on Uber's suit.

Went off to try and contain the Scapes unleashed by the new S-class threat.

Helped set up a system to keep Skitter contained.

Focused and expanded upon his specialty.[8]

Kid Win was present during the battle. He was struck by a laser aimed at Crane the Harmonious, then something inside his suit detonated, killing him.[21][22]

At some point, Kid Win was resurrected as a member of Valkyries Flock.

Met Vista and Antares. Discussed the powers with Victoria.

Winman participated in the Wardens' battles against The Simurgh and Machine Army alongside Clockblocker and Breakthrough.

He recycled Antares' gun by downsizing and incorporating it into his power-armor.[24] 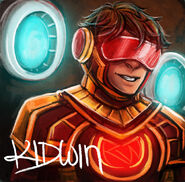