The Wardens
(not formally affiliated)[1]

Daybreak 1.8
Dr Jessica Yamada was a parahuman psychologist employed by the Protectorate.

Dr. Yamada was exceptionally dedicated to her job. She was willing to lecture Chevalier for breaking her rules, and to work with numerous dangerous parahumans.

She was an expert in parahuman psychology; providing information on Trigger Events that Weaver was unaware of, and sitting in on PRT meetings as a consultant.[2][3] Her focus was mainly on child parahumans.[4]

She disliked much of cape culture, such as the names they would choose.[5] She encouraged her patients to use their real names[6][7], feeling that the use of codenames to refer to patients took away their humanity.[8]

Dr. Yamada disliked lying to her patients, but was willing to do so when she felt it was necessary.[9] She disapproved of the PRT's policy of therapists rotation, but did not voice this disapproval when it was brought up.[10]

She felt that she had encountered more monsters than Legend, which let her stay calm in dangerous situations with patients.[11]

Jessica smoked in grad school, a habit she didn't return to until 2011, when she was overwhelmed by the state of the Brockton Bay Wards.[12]

It took her eight years to train as a psychiatrist.[13] She went to graduate school.[12]

She saw Shadow Stalker after she was kidnapped and tortured by Regent and the Undersiders.

On June 17th she saw Clockblocker, Weld, and Flechette in the Brockton Bay Wards. She warned Miss Militia that her Wards were suffering from low morale. On June 18th she saw Kid Win and Vista.

On June 19th she was called in to cover for a colleague named Richmond.

On June 20th she saw Clockblocker, but the Mayoral debate was attacked by Coil, disrupting things. At 6am the next morning, she had a conversation with Eidolon about his problems.[2]

She had to deal with one of her patients' disappointment after hearing the news about the Cauldron treatment.[14] She was paid a visit, and her patient accepted an invitation to the Irregulars.[15]

After a rocky start, Dr. Yamada settled into being the primary therapist for Weaver.[16]

In the aftermath of Gold Morning, she had a session with the Green Maiden.[17] She also assisted with a new research project.[18][19]

She formed a therapy group in the two years before the Wardens offered her a long term position.[20]

After a meeting with then distraught Victoria Dallon, she attempted to persuade Amy Dallon to seek professional help and maintain distance with her sister. Instead, Amy suggested introducing Victoria back into hero business and warned Jessica about Jessica's impeding burnout.[21] In subsequent days, Jessica started reducing her workload and recovering her private life.[22]

As the therapy group increasingly gained the ambition to become a hero group, Jessica reached out first to Weld and then to Victoria to speak to them.[23] As Victoria spent more time with the group, she noticed something wrong with the group, a feeling Jessica agreed with but could not discuss due to confidentiality.[24]

Jessica became unresponsive to calls and texts immediately following the portal sabotage by The Fallen[25]. In her absence, Victoria tried to fill her role in helping the therapy group.[26]

Jessica survived the sabotage and was stranded alongside Riley, Jamie Rinke, and multiple other Wardens' personnel and ex-prisoners near a frontier settlement.[27] Meanwhile, her notes about Breakthrough get delivered to Victoria Dallon as a contingency measure.[28]

Jessica was second in command of the group, and was assigned to keep an eye on parahumans.[29]

Shortly after Valkyrie's arrival, Jessica had an ugly fight with Bonesaw because of mutual suspicion and both of them being on the end of their wits.[30] She was injured during the fight and, feeling inadequate, quit her job shortly after returning to The City.[31]

Jessica assisted Wayne Darnall during his evaluation of Victoria Dallon at the start of the second Shin crisis.[32] Later that day, she explained to Victoria why she brought her into the therapy group and what happened after the portal incident.[27]

She talked with Tattletale about Lookout's mental break.

Jessica met Breakthrough, when they were returning from The Firmament.[33]

Her decision was one of the reasons for the Wardens to attempt to capture Chris Elman during the Victoria's plague deployment.[34]

Jessica moved on to the teaching work.[35] 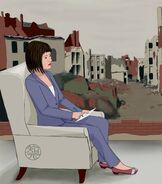 Image by Igor for We've Got Worm art contest

Image by VNL for We've Got Worm art contest