A cruel and manipulative man with a love of theatrics. Jacob had a playful demeanor even while he was committing small scale personal pain or when coordinating wide scale atrocities with the backing of the Slaughterhouse Nine.

Every move and action he made was calculated to afflict change on the world around him for the worse. He expresses a love for affecting "keystones" in his introductory chapter,[3] that could change the world around themselves as well as though he was an individual butterfly effect which highlights his grandiose self perception.[4]

On a personal level Jacob found Shatterbirds's tactics tediously repetitive, but kept this to himself as she acted as an unmistakable herald to the Nine.[5]

Bonesaw and Jacob would "play" at the Slaughterhouse Nine being a happy family, with Bonesaw eager to play the part of a joyous and enthusiastic younger sibling or daughter figure.

During the Nine's long biological stasis Bonesaw is given time to reflect and grow as a person, later feeling conflicted about her role in the Nine

She no longer feels comfortable in Jacob's presence as she feels like he knows that her loyalty has been shaken.

Jacob and Harbinger are not on speaking terms, Harbinger leaving the Slaughterhouse Nine shortly after Jacob took over due to a conflict in personal methods(as outlined in Number Mans' interlude)

Jacob is tall and slender, favoring civilian clothing that shows off his lean and muscular upper body.

He has an attractive face similar to Johnny Depp's though longer and with pale blue eyes. His hair is gelled back exposing a severe widow's peak.[6]

He has a full beard and mustache that he keeps neatly trimmed in a goatee fashion. These are further trimmed to give his beard sawtooth edges pointing inwards[7]

He is noted by Bonesaw to have recently started showing signs of his age, with minor wrinkles around the eyes and stray white hairs.[8]

Jacobs' primary ability extends the cutting edge of any handheld cutting weapon far further than its' physical dimensions, no known upper limit to distance.[9] Not to be discounted is his long experience with using various knives.[10]

Effects on weapons such as Armsmaster's Nano-thorn would not function, only the blade itself was projected.[11] What he can actually do with the weapon is limited by the physical capabilities blade itself; for example, he needed an actual butcher's cleaver to sever limbs instead of a dagger.[12] Individuals who have blades as part of their body, such as Hookwolf, can be used synergistically by Jack Slash.[13] The ability to do so is likely linked to his long and successful time as a murdering maniac granting Jack great facility with his power.[14]

Jack's secondary power grants him enhanced intuition regarding parahumans,[15] as well as an ability to influence the emotions of anyone connected to a shard.[3] This makes him a tougher challenge in a fight than his more obvious ability suggests and causes him to instinctively avoid situations that the Nine couldn't overcome.[16]

This secondary ability is so subtle that Jack himself is unaware of it, but it is effective enough that the Nine have been perceived as a near invincible S class threat since he took control of them.

Bonesaw also modified members of the Nine with various "safeguards"; sheathing their vital organs and major arteries in a protective sub dermal mesh, further wire reinforcement was put into the skeleton to avoid broken bones,[17] with special attention was paid to the organs and spine to keep them functioning.[18] She also rendered her teammates resistant to her pathogens,[18] and granting them artificial neurons which allowed them to make plans Cherish could not see, it is unknown if this could be adapted for other Master powers.[19]

Jacob was a young trigger. His mentally unbalanced parents shut him inside a bomb shelter with a radio link to his father, who gaslit him by convincing him that a war was underway. He triggered upon exiting the shelter and seeing that the world was fine and having his entire reality challenged.[20]

At some point during or before 1987,[21] Jack encountered King and joined the Slaughterhouse Nine. He felt great displeasure at King's interest in grooming him as a pet project or new "Gray Boy", and conspired with Harbinger to kill him.

Jacobs reasons were ego-driven, feeling like King saw him as a personal pet project instead of a man in his own right.

Harbingers' reasons to revolt are unknown, though they were personally strong enough to warrant a violent coup.

Afterward, Jacob renamed himself "Jack Slash" with the specific intention of sounding harmlessly simple and absurd.

Under Jack's leadership, the Nine become synonymous with terror and death, caring nothing for political power or money.

They seemed unstoppable, hitting towns throughout the United States seemingly at random and killing as many as they could before leaving. They notably avoided using bombs or more traditional methods of mass destruction, opting to kill personally using their powers.

The recruitment process became a trial in which each existing member of the Nine would torture and attempt to kill recruits and survival meant being accepted as a new member.

Jack and the rest of the Nine arrived in Brockton Bay in June 2011, a few weeks after Leviathan's attack, looking to recruit new members. Their candidates included Echidna, Regent, Armsmaster, Panacea, Oni Lee, and Bitch. During this time, they laid low, killing only a few civilians.

After being informed of the Nine's presence by Coil, Dinah Alcott made a prophecy that if Jack Slash was not killed before he left Brockton Bay he would almost certainly set into motion the end of the world.

Jack tracks down Oni Lee and offers him a chance to join the Nine. After Jack determines that Lee is unworthy, the two fight, and Jack grievously injures Lee. He takes the wounded man to the Anders apartment and breaks in, dumping Lee in the bathtub and confronting Theo Anders. He tells Theo that he will kill him and Aster as soon as Purity returns home. During the subsequent conversation, Theo convinces Jack to spare them by promising that he will become a great hero and stop Jack. Purity then returns from grocery shopping and is about to attack Jack, but he tells her that her powers have been weakened by recent cloudy weather and overuse and that she has little chance of defeating him should they fight. She reluctantly allows him to leave with Oni Lee, whom he later gives to Bonesaw.

Fully informed of his role in ending the world, Jack went about making it happen.

After convincing Zion to let loose Jack was left where he was, buried in containment foam in a Gray Boy loop, fighting intense pain and having only momentary relief.[22]

When Five returned to Earth Bet after Titan Fortuna crumbled away, he visited Jack Slash's time loop and peeled away the containment foam.[23] However, the man inside this time loop was no longer Jack as he lost his mind and could not communicate.[24] Jack was in agony and, at one point, kept trying to crack his head open to no avail.[25] He was not in a state suitable for becoming a Titan or a broken Entity.[26]

Thanks to Golem, the Wardens are fully aware of Jack's power.[27][28] Five says they are not going to let him out of the time loop;[29] he calculates that in seven weeks and three days, they will collapse the time effect and kill Jack in the process.[30]

Months after his scheduled death, Tattletale confirmed all Titans are gone and did not mention Jack when she discussed current villainous threats; he is presumably deceased.[31]

Illustration by DerTodesbote on DeviantArt

Illustration by RespicePostTe on DeviantArt 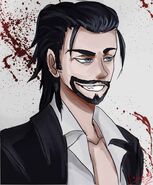 Illustration by kingdaume on DeviantArt