Worm Wiki
Register
Don't have an account?
Sign In
Advertisement
in: Chapters, Articles in need of completion, Interlude Chapters

11d (Anniversary; Armsmaster) is the fourth anniversary interlude of Infestation. Armsmaster is paid a visit by a self-supposed peer.

Turns out it's no ones favorite tinker Mannequin.

Dragon accidentally reveals that she needs Colin for something. 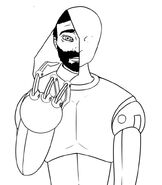