Start a Wiki
This is for the parahuman known as Hero. You might be looking for Heroes in General.

Hero was one of the founding members of the Protectorate.

Hero was a genial, encouraging man who secretly supplied the first Wards team with video games and movies so that they could have an enjoyable pastime between their work as heroes and after school.[1][2]

Riddled with health problems from an early age, Hero considered Cauldron heroes after the formula they gave him cured his illnesses.[3]

He had a leadership position in the early Protectorate, even though he believed that he would not be suited to one.[4]

Hero had blond hair.[3]He wore a golden helmet and body armor with blue chain mesh,[5][6] or blue body armor with gold detailing, depending on the year. The PRT emblem was worked into one shoulder, with wings drawing attention to it.[7]

His helmet had a golden, heavily tinted visor, and could be removed while leaving the visor in place.[7]

Hero was considered to be the preeminent Tinker of his day. Hero's specialization was not known because he lived before Tinker specializations were considered, but Legend correctly theorized that Hero specialized in wavelength manipulation,[8] similar to the stilling powers that Zion and Eden employed, with broad applications stemming from few restrictions on his shard.[9] His creations included a helmet-camera, a disintegration gun, a jetpack, sonic weapons, small, surprisingly effective power sources and explosives,[4] a raygun, and jet boots.[7]

For much of his early life, he was beset with terminal health problems such as organ problems, diabetes, tremors, and chronic headaches until an unmitigated Cauldron formula cured him of his illnesses.[3]

Hero was said to have been the first real tinker.[4]

In 1988, Hero was introduced to Alexandria and agreed to her idea of forming a government-regulated superhero team with Cauldron's backing.

Hero was present when Behemoth emerged for the first time in 1992.

In 1993, he was sworn in alongside Alexandria, Legend, and Eidolon as one of the founding members of the Protectorate.

On September 15, 2000, Siberian bisected him in a confrontation between her and the core Protectorate. Eidolon attempted to heal Hero, but he ultimately died.[10]

His loss splintered the Triumvirate, resulting in the members going their separate ways.[11]

Hero remained in the public eye even after his death, recognized as both the first Tinker and one of the best. Because of this, other Tinkers, such as Kid Win, strive to emulate his model.[4] 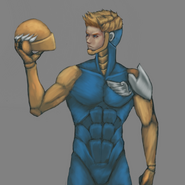 Illustration by ElCuervoBorracho on Reddit
Add a photo to this gallery

Retrieved from "https://worm.fandom.com/wiki/Hero?oldid=53712"
Community content is available under CC-BY-SA unless otherwise noted.