Interlude 25
Nicholas, publicly known as Gray Boy, was a founding member of the Slaughterhouse Nine.

Gray Boy is dangerously unstable, even for a member of the Nine. Bonesaw speculated that he would likely loop someone in a room just because he could. Jack Slash had asked for only one clone of him, because he could only keep one Gray Boy under control.[1]

The original Gray Boy would not have known how to operate a computer, but Bonesaw's version possessed memories and skills taken from a child.[2] It is unknown how much Bonesaw's Gray Boy resembles the original in personality.

Gray Boy's clone is sadistic, using his powers to effectively torture people for eternity. When Purity disobeyed him, he devised a "special" punishment - she was left unharmed, but trapped, with the promise that he would eventually return and trap her daughter alongside her. On one occasion, he arbitrarily demanded a victim tell him an "interesting" story while torturing them, with the promise that they would be left relatively unharmed if he liked it.[3] He grew angry at Jack Slash when they attempted to flee the heroes together, telling him that he was making himself "prey, instead of the predator."[4]

Even after his first death, Gray Boy was the one of the most feared villains to have ever been part of the Slaughterhouse Nine.[5]

Nicholas is prepubescent in appearance, older than ten but younger than fourteen, with neatly parted hair and a private school uniform complete with glossy black shoes. His voice is high and clear.[1]

He has a monochrome effect surrounding him, with spots of light and shadow flickering around him. Periodically he flickers, a transparent double image momentarily overlapping him looking in a different direction.[6]

Gray Boy is able to form stationary time loops, and his power reverts any changes made to his body. A quirk of his power is that anything affected is heavily desaturated, giving him his namesake monochrome look.

Gray Boy was the only one who could enter the loops.[7] During these loops, the only changes to the victim to carry over are those he inflicts on them (such as a cut or burn) and in the progression of their thoughts. Pain inflicted on the victims is repeated over and over again.[8] Gray Boy can modify the time between loops, extending them to give victims time to speak full words or shortening them to more quickly repeat the initial burst of pain from a wound. However, he claimed to be unable to turn it off for anyone except himself.[4] The powers of anyone trapped inside them were unable to reach out of the loop.[9]

He claimed that victims would usually go insane after a few days, then work through that back to sanity, then crack again, in an endless cycle. He also claimed that they never grew used to the pain he inflicted.[3]

The loops last for an unknown amount of time, as no loop he has created has ever stopped. Gray Boy told one of his victims that it was theorized that his loops would last “Until well after the sun goes out, [...]".[3] However, Wildbow has stated that they would not actually last forever or even until the sun runs out, though he also questioned whether that would actually matter after the first few thousand years of torture.[10]

Gray Boy can affect an area roughly 5' across and 8' high,[11] and was able to freeze a ten-foot high "wall" of air on one occasion.[12] He claimed his power operated at the "speed of thought," and that he believed no-one was immune to it.[3] He was able to freeze Foil's darts in midair.[12]

His power also makes him effectively immortal, constantly restoring his body to the exact condition it was in when he first got his powers. This prevented him from aging or even getting dirty. He retained memories despite his constant reversion.[13] Any time he was hurt or debilitated, his power would take him back as far as he needed, allowing him to maintain his position if he wanted or move out of the way.[14] Only two people are known to be able to permanently kill Gray Boy; Glaistig Uaine[15][16] and Foil.[17]

Gray Boy knew Bonesaw's name before she told him, and she believed he - like Jack - was aware she planned to betray the Nine. It is unclear what aspect of his powers allowed this.[18] He had no special ability to aim his attacks, and didn't receive feedback from his power regarding what he'd hit.[12]

Originally a young boy named Nicholas, Gray Boy was created by Cauldron, much like Shatterbird and The Siberian.[19][20] Cauldron sold him powers and set him out to infiltrate the Slaughterhouse Nine, knowing that King saw a reflection of himself in disturbed young boys like Jacob and Harbinger. However, Gray Boy's mind was too affected by his powers, and he answered every question he was asked, revealing where he'd come from and why.[21] Out of Cauldron's control, he fell in line with King and became one of the founding members of the Slaughterhouse Nine.[22]

In terms of power-usage, the original Gray Boy acted similar to Labyrinth at full power; using his powers indiscriminately while staying within an area. King was effectively immune to him, as any loop used on King would be transferred to someone he had touched within the last 24 hours. His immunity to Gray Boy's power allowed him to introduce himself to him in the first place, and eventually lead him around and wield him as a weapon.[23] Despite this, King had only a flimsy hold over Gray Boy. When King died and Jack Slash took over, Jack's power allowed him to leverage Gray Boy and control him.[23]

Cauldron allowed Gray Boy to survive because he was the closest thing to a weapon they had against Scion since Eidolon. When the Slaughterhouse Nine started picking up momentum and more powerful parahumans started getting removed from the field, the losses became greater than Gray Boy's theoretical worth, and Cauldron moved in, maneuvering Glaistig Uaine into killing him and taking his power for herself, so that Gray Boy's power would still be available against Scion.[23]

Jack Slash had been sure to tell Bonesaw bedtime stories about Gray Boy.[24] As such, she took particular care when she resurrected him as a clone for the Slaughterhouse Nine-Thousand. Gray Boy was the only member who she only cloned once, as per Jack's explicit instruction.[1]

The cloned Gray Boy had skills the original lacked due to Bonesaw implanting the body of the clone with the memories of an actual child.[2] He stepped out of the cloning chamber fully clothed and dry, and unlike the other clones, he didn't struggle before finding his feet. He greeted Jack Slash and approached Bonesaw. The two had a brief, seemingly friendly conversation.[25] The cloned Gray Boy was shown to be completely lucid and highly sadistic. Due to the unique circumstances where Gray Boy's power restored his original body, it is unknown whether his power also restored his original memories and personality in addition to the new memories implanted by Bonesaw, or if his personality was purely Bonesaw's construction.

Gray Boy was sent to retrieve Aster as part of Jack's game with Theo. Following his orders, he trapped Crusader, Purity and two PRT agents in loops. He told one of the PRT agents that he wouldn't torture her if she told him a story he found interesting; she chose to tell him the details of the heroes' plans to prevent Jack ending the world.[3]

During the final standoff with Jack, Gray Boy managed to loop Scion. This proved to be ineffectual, however, as Scion was able to break out of the loop with little effort. Gray Boy was eventually killed by Foil, but not before he turned on Jack Slash, trapping him in a time loop and torturing him.[4]

Glaistig Uaine made use of Gray Boy's power in the fight against Scion.

Illustration by Pabel and Nine on Tumblr 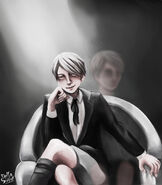 Illustration by delta-sulfur on DeviantArt

Illustration by What is Sleep on Tumblr

Illustration by Cadillion on DeviantArt