Queen 18.5
Katherine Oldershaw,[1] known publicly as Grace, is a member of the Chicago Wards.

She is often energetic and boisterous, but can be resolute or serious when the situation calls for it. In her early days as a Ward, she was known for being vulgar[2] and snappy,[3] adopting the ironic maxim "Don't fucking swear" as a result.

During the Echidna fight, Grace wears flowing white cloth wraps, silver armor, and gloves reinforced for striking.[4] Her gloves were reinforced with metal, with rivet-like bumps over each knuckle etched with ornate designs and metal filigree feathers at the edges. Her costume also had padding with a similar design to her gloves.[5] She has blonde hair.[6]

When she went against Behemoth, she incorporated PRT issue chainmail mesh into her costume.[7]

Later, she updates her costume, with white cloth, steel-toed boots,[8] and studded, reinforced pads at every striking point, similar to a martial artist's outfit but with more coverage. She also wears a combination headband, hairband, and mask that reveals her lower face, and her hair is glossy and wavy.[9] Taylor describes her as athletic.[10]

Grace has enhanced reflexes, agility, and perception of time.[11] She can imbue parts of her body with extra striking power and invulnerability, both to powers and general harm.[12][13] She mainly uses her powers in conjunction with martial arts.[11]

Grace was likely part of a multi-trigger event.[14] She eventually joined the Chicago Wards.

She participated in the battle against Echidna, alongside members of the Chicago Wards and the Undersiders. Several clones of her were created after she was caught by Echidna. She would later escape.

She was part of the reformatted Chicago Wards team that deployed against Behemoth at New Delhi.

She acted as mission control during the Chicago Wards' raid on Topsy's branch of the Folk.

Along with the other members of her team, she was interviewed on the talk show, "Mornings with O, J, and Koffi."[15]

After Tecton graduated to the Protectorate, Grace took over as the official leader of the Chicago Wards.[16] She would later help fight against the Slaughterhouse 9000.

She was present at Gold Morning. 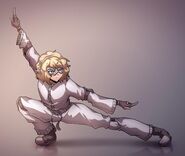