Worm Wiki
Register
Don't have an account?
Sign In
Advertisement
in: Articles in need of completion, Characters, Females,
and 12 more

Glow-worm P.8 (mention)
Interlude 5x (mention)
Bianca, known to most by her preferred name Goddess, is the dictator of Earth Shin.

By the time she appeared in Worm, she was a powerful parahuman who had a world that answered to her for decades. According to Citrine, a parahuman with access to a large number of information resources, claims 'Goddess' is a title Bianca chose.[3] Her inveterate reign came to an end with Gold Morning when a then unnamed force usurped her and her court for the army. Afterward, in the ruins of New York, her shouts and calls spoke to an authority figure trying to come to terms with her loss of command.[4]

Two years later while in The City she retained her sense of command. When speaking she incorporated gestures into her speech.[5] She further showcased a well thought out strategy and skill in negotiation.[6] She believed in information hygiene.

The organization originally relocated Bianca, against her will; and left parahumans for her to find.[5] The full nature of their relationship and the extent of their collaboration, if any, is unknown.

As a ruler, she seemed to appreciate those with a code of their own.[5]

An enemy and harasser, one of the primary reasons she wants to take power again.

While her ethnicity is not fully known, 'Goddess' wears a blue costume with a gauntlet emblem, white fur on the collar, and a heavy cape.[7]

In Ward, she appears as a blonde, with a more modest attire, although keeping blue-white motif.[8][9]

Bianca's cluster had a structure that was defined as a 'carousel' by its members. Every day, one member of the cluster would have full power, while the rest would be very weak.

Due to having a full or nearly full connection with six shards[10], Goddess has an almost unheard of variety of powers.

Her primary[11] power is a Master power that lets her influence anyone in her vicinity,[12] which realigned parahuman cognition into being her subjects.[13] This allowed her to effectively turn her organization into a hive mind with her 'lieutenants' carrying out her orders.[14][15] It is not infallible however as it can be interfered with, inoculated against, and reasoned out of.

Her second power is her most obvious one, telekinesis;[12] as a powerful long-range expression of this ability she can fly, have super-strength, and manipulate objects and people, given how Khepri used her during Gold Morning.[16] Her telekinesis manifests as fractal patterns in the air, and although she is only capable of moving inorganic objects, she is capable of seizing people by their clothes.

Third, Goddess has a touch-based Trump ability that lets her tune abilities and defenses in a manner akin to Scion.[12]

Fourth, she has a danger sense.[17] Her danger sense will alert her to the strength and direction of any danger that she faces. If the danger is overwhelming, such as in the case of Scion or Contessa, she will feel danger with a distinct lack of direction.[18]

Her fifth power is a personal power battery, that she can tap to strengthen her abilities for limited amounts of time.[12] When used in conjunction with her Master ability, her influence can spread between capes like a virus.[19]

Her sixth and final power has not yet been revealed or was mistakenly ​​labeled as part of one of the other five powers by fans.​

Bianca triggered during the quarantine of White Rock between 2008 and 2011.[20] A portal between Bet and Shin was found and used for smuggling. Problems arose when people became sick and started dying. The portal was shut, and people were trapped on whichever world they were left on. This caused trigger events for many people around.

Later she was transported to Earth Shin by Cauldron[15] and quickly rose to world domination.[21]

Because of Professor Haywire's activities, the PRT became aware of her and her influence over her group of parahumans.[14]

On December 19th, 2012 the Simurgh was sighted in Paris, though eventually driven off by Scion, the data file referring to the event specifically references "The Woman in Blue" and the "United Capes". It is unknown what connection, if any, ties into Goddess.[1]

Goddess resisted Khepri's control after the Doormaker to open a portal into her council chambers on Earth Shin. She used her power to throw off Khepri's control over herself and the others in the room.[7] Khepri attacked again with an enhanced version of Canary's song, and Goddess fell underneath Khepri's sway.[22] Khepri briefly wondered at the nature of her abilities and where she had come from before she directed Goddess to the battlefield.[12]

Later, Khepri had Goddess stand alongside other telekinetics by portals and used her to move capes further, faster, or out of the way while fighting Zion.[16] Presumably, Goddess was unharmed or at least resistant to damage.

After Doormaker was left incapacitated and Khepri's subsequent loss of control, Goddess was stranded in New York completely at a loss over what was going on and shouting to find her compatriots. After Zion's death, Goddess went after the girl who had brought her into the fight flying around barriers and more.[4] She looked on with silent fury as the girl who was Khepri was allowed to leave.[23]

The general public believed that she returned to her world after the event,[21] since at that point Goddess was content to stay in the background and recollect her parahuman-lieutenants, which were stranded alongside her.[24]

She was being surveilled by Foresight and the Wardens,[25] as well as Teacher and, probably, multiple other sides, which made her feel hounded.[26]

Mentioned as one of the main villainous influencers in the new multiversal human society.[27][3]

Demonstrated a continuous interest in parahuman prison inhabitants. Although bureaucracy and a threat of open conflict with the whole of Gimel were still able to hold her off at this point.[24]

With the Portal Widening, new Fallen prisoners being up for grabs, and general reactivation of major players she was becoming impatient.[24][26]

Using the moment when her observers were distracted, she met with Marquis and Amy, ensuring their assistance on unspecified terms. Shortly after that, she directed her attention on Breakthrough.[26]

Together with Breakthrough, Bianca attacked the parahuman prison. She mastered every cape there and set out to take over the rest of Gimel.

Before she could accomplish this, Breakthrough broke free of her master effect and started to fight back. She ultimately lost her life to a surprise attack by Cryptid. Her position as Empress of Earth Shin was usurped by the Red Queen, and her clustermates fled to March. 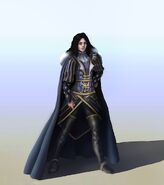