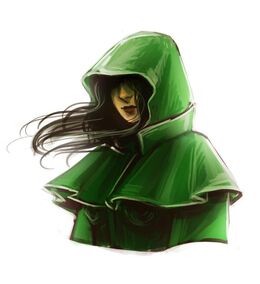 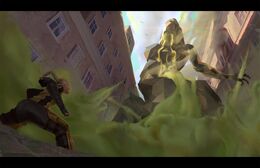 Daybreak 1.1 (Mentioned)
Daybreak 1.2
Fume Hood, real name Lauren was a long term villain who is taking another bite out of life.[3] She would later become the Titan Eve.

Was caught up in the life of a villain until she wasn't, having had a rather abrupt wake up call. She felt a great deal of guilt over her actions as a villain, from getting friends hooked on drugs to causing a civilian to miscarry their baby.[4]

She is slowly adapting to being a hero, with people being grateful for her helping and not personally blaming her whenever a fight goes badly.[5]

After titanification she was not actively attacking the heroes that kept harassing her.[6][7]

Was 'friends' who fit together well. She found him annoying sometimes but seems to have genuinely loved him. She tried something new when she learned he disappeared.

Her commander and friend.

Fume Hood became somewhat of a mentor figure for the younger heroes. They suggested the name for her titan.[8]

Lauren was considered mediocre while operating under her collection of apple themed villain names.

All she needed to gain the public's support was to get grievously injured.[9]

Apple has unconventional preferences in tattoos.[11]

She is one of smallest of the Titans, which still amounts to being six or seven stories tall.

Her mobile body is black and constantly emitting grey-green smoke, barely humanoid, the majority of her true mass stays undifferentiated inside the dimensional rift.[12]

She retained the cowl of her costume. As other titans she has no visible facial features and power-exaggerated hair.[13]

Fume Hood creates fragile spheres of poison that explode on contact with hard surfaces, creating weak concussive blasts strong enough to knock a person over and a splash or cloud of poison. The spheres are solid and about the size of a billiard ball.[14] Their color depends on the potency of payload, ranging from yellow to yellow-green and further into black.

The strength and properties of gas can be varied, usually being stronger if concentrated into liquids, when it can affect on skin-contact. Apple predominantly uses poison that only strong enough to make a person nauseous and slightly feeble,[15] but she is capable of ratcheting the lethality of gas to the point of melting organic objects on contact. She never used these.[16]

Apple can recall already expelled gas by forming new projectiles.[17] She also can dissolve the already formed spheres, however it takes some time.

She has some control over the spheres, able to launch them in straight lines at the record-level pitcher speed,[15] course-correct them mid-flight,[18] or make them orbit her hand in an ellipse.[19][15] She can manifest multiple spheres at a time and send them all at once.[20]

Her own gas does not obstruct Fume Hood in any way, including perception.[21]

As Titan Eve, her physical range and durability have drastically increased, due to her new and giant non-human physiology. Titan Eve produces gas that fills the area in a radius around herself. Titan Eve has full access to all potential abilities provided by her Shard. Titan Eve can control this gas to a greater extent than Fume Hood, solidifying it at will into various shapes that she can in turn manipulate.[22] She uses this ability to solidify her gas into weapons, launching spikes of hardened gas at opponents.[23] When those solidified projectiles collide they have a corrosive shrapnel effect, producing a heavy, but localized damage.

Titan Eve can alter the properties of the gas she produces. Including a gas with a bubblegum pink hue to it. This gas erodes holes into whatever it contacts, from which pink and green maggots with sharp pincers can form. These creatures can be as big as humans.[24][25] The holes formed by this gas have some extradimensional nature, as they do not significantly compromise the structural integrity of whatever they form in. [26]

Titan Eve can produce a gas with a lime green hue that condenses into a thick, slick slime of the same color on whatever surface it contacts.[27]

Lauren triggered one day when she was walking through an alley of homeless people, and accidentally offended them by spitting near one. Becoming frightened on being confronted, and falling into a stack of insulin needles, Lauren triggered the moment she realized that the altercation had drawn attention and that everybody was looking at her with disgust.[28]

She became a long term villain who went by a number of apple-related names.[29] She began her villainous career at 16. She mostly wandered from city to city, committing minor crimes, often serving as hired muscle for other villains.[2]

At the age of 21 she participated in Games alongside Blasto, played on Accords nerves and survived.[1] Fended off an attack by Damsel of Distress but was unable to keep her from wrecking the base.[30] Once faced with Accord's trap she expressed more common sense than Damsel.[31]

When she was 24,[2] Blasto was kidnapped by Bonesaw. Although she hadn't seen him for a year up to that point, this seemingly affected her deeply.[32] She formed her own gang of villains and attacked a shopping mall, but accidentally caused a pregnant woman to miscarry with her power. Amid considerable backlash, she turned herself in.[33] She cut a deal with the law allowing her to get an education and time to consider things,[4]

She was still serving time in prison when Gold Morning arrived.[4] Like others she was released to lend a helping hand.

Became a hero thanks to the amnesty. Joining a nascent team in Norfair. After info about her past leaked out her team had to deal with protests.

She had a talk with a patrol woman who she gave a snapshot of her life to. Things came to a head when the building was assaulted by a group of villains looking to kidnap her. Ironically, Fume Hood ended up shot by a civilian.

She survived thanks to her teammate Tempera and the patrol women from earlier providing assistance.[34]

She later recuperated in the hospital, and stated her intention to lie low for the time being.[9]

She survived the portal sabotage and attended hero rally alongside Tempera.[35]

Fume Hood answered Breakthrough's reinforcement call and was instrumental in dealing with armed resistance during Trial and Error arrest.[36]

She became one of the members of Breakthrough network under Victoria oversight and was paired with The Major Malfunctions.[37]

Fought alongside The Major Malfunctions and Breakthrough during the second Wardens' assault on Teacher's Compound.[39]

She was on a guard duty at the Cheit-portal, when Contessa passed it with captured Teacher.[40]

The Major Malfunctions could not prevent Contessa from escalating and leaving the scene, and were forced to deal with the aftermath of the anti-parahumans rioting. In a confrontation with one of these men, Fume Hood was shot. When the Major Malfunctions refused to leave her, she second triggered in a broken way, becoming a Titan like Kronos. In doing so, she caused the cascade by tagging the over-connected Contessa's power and Cheit portal, finally breaking the ice, and turning multiple other parahumans into Titans.[41]

Fume Hood steered reality collapse from The Major Malfunctions. She made contact with Kronos and started to make attempts to form a network with the other Titans.

The video of her gassing anti-parahumans was being spread.[42]

Titan Eve made her way towards Titan Oberon with the intent of subsuming him, and the two began to fight. Breakthrough, The Undersiders, The Major Malfunctions, Deathchester, and Rooftop Champs were tasked with preventing that, so they alternately attacked both titans.[43]

Once Oberon was joined by Skadi, Eve, faced with unwinnable odds, decided to retreat to Kronos.[44]

Later she was seen struggling against the assault of Fortuna's titans.[45] 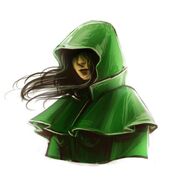 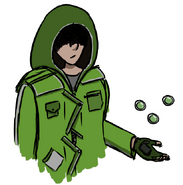 Image by tkjarrah on tumblr

Image by terriblydrawnparahumans on tumblr