Worm Wiki
Register
Don't have an account?
Sign In
Advertisement
in: Articles in need of cleanup, Females, Heroes,
and 12 more

She initially hoped she could become friends with Shadow Stalker, the only other female Ward her age in Brockton Bay. She noted that her work would "drain the life out of her if she had no friends to do it with". However, she was shocked by how comfortable with violence Shadow Stalker was. Later, she professed that she was never good with the ick-factor of the job.[4]

She kept to an exercise regimen, and spent four nights a week in the gym.

Lily is a lesbian, and was immediately attracted to Parian when they met. She was willing to risk getting into trouble with the Wards in order to befriend her.[5]

Lily and Sabah have a very strong romantic relationship.

Foil and March are a part of the same cluster. March has attacked Foil several times, at one point even attempting to kidnap Parian.

Lily has a complicated relationship with her family, with a lot of drama getting in the way of her ever settling down.[6] Her sister was involved in her trigger event in fact.[7]

Lily is described as a Japanese-American girl, of above average height.[8]

As Flechette, she wore a skintight,[9] deep purple[10] costume with a tinted one-way visor,[11][9] quiver, and narrow platinum-white armor panels that flared out at the upper edges and tapered at the bottom - mimicking the vague shape of an arrow or darts.[10] Her costume included metal cleats on her shoes, that could dig into the environment under the influence of her power, or help her grasp the chains her arbalest launched.[12]

When she first debuted, her costume was blue-and-white rather than purple-and white, and described as "PRT quality" and "polished but ... boring" by March.[11] She originally carried a sword alongside her other gear, but abandoned it for being too dangerous.[13]

She carried a Tinker-made arbalest to launch needles three feet long – needles that carry the effects of her power, ignore gravity, and benefited from her secondary power of enhanced sense of angles and timing. The arbalest produced an unlimited supply of sturdy chain, and her needles remained fused in place where they hit, allowing her to use it as a grappling hook as well as a weapon. She also carried nine-inch throwing darts, her primary weapon before she acquired the arbalest.[13]

After Lily became Foil, she donned a black costume with asymmetrical belts, boots, armor and gloves. She also wore a black opaque mask with silver trim at the edges. As a weapon, she used thrown blades augmented with a rapier[14], the same tools she originally used when she first discovered her powers.[15][16]

Lily has the ability to temporarily imbue nonliving material[17] with the power to ignore select laws of physics. Most notably, they could punch through virtually anything.[10][18] She is not restricted to her hand when she uses this power. When imbuing an object with her power, Lily could tune the effect; for example, she could alter the time limit so that her charged ammunition would glue itself to a place (at the molecular level) if she timed the effect to wear off at the right time.[2] She could use her ability on her costume to reduce the effects of friction or make her shoes bite into surfaces.[19] Another trick she could do was to make her costume frictionless and allow her to slide around.[12]

Scion described her power as "charging objects with energy [...] the small pieces of alloyed metal unfolded, taking shape in not just this world, but all realities, at the same space and time, bristling with an effect that would sever their attachment to most physical laws."[20] Although this is widely interpreted to mean that they extend into every Alternate Earth, this may not be the case.[21]

Her power is ineffective against abilities that redirect her shots before they make contact.[22][23] An underling of Lord of Loss shattered her shot with their All-or-Nothing crystal, though the crystal shattered as well.[24]

In her final fight against March, Lily's charged weapon conflicted with March's version, where each nullified the other.[25]

Lily also has an intuitive understanding of angles, trajectories and an enhanced sense of timing that she uses for aiming and applying her power.[2] It also gave her a defensive advantage being able to dodge blows easily and even catch arrows out of the air.[26]

Foil can destroy an Endbringer's core if it is exposed.[27] However, once the sheer amount of damage she could do to Endbringers was realized after the Battle against Behemoth, the Endbringers changed their tactics.[28]

Using her power on Chevalier's sword would have broken it.[28] This is due to the fact that Flechette's ability to warp space beat Chevalier's, much like the Endbringer's core was able to withstand Chevalier's ability. It caused the Siberian to flicker and vanish on contact,[29] and Lily would have had a similar effect on Clockblocker's field.

The Entities referred to her power as "Sting". It was originally used for fighting other Entities.[30] They haven't found a way to improve it for aeons, but it was still useful to see how other powers interacted with it.[31]

Lily was put into the foster system at a young age, and had older siblings who weren't.

She triggered 3 years prior to the start of Worm, as part of a group trigger in New York.[1] This trigger event occurred when she was standing at a subway platform. She was attacked from behind by one of her estranged sisters, who was homeless. Her sister tried to push her onto the tracks and in the process, other people fell onto them. Lily triggered as her sister pushed her head down, putting it in the way of oncoming trains, and seeing her sister get hit.[32] One of her old nemeses, March, was another part of that group trigger.[1][33]

At some point she joined the Wards, debuting with a video that doubled as an ad for Flechette merchandise.[34] She had to stop using a sword with her power after it proved unacceptably dangerous. A year after joining the team she was given an advanced arbalest, rendering the signature darts she had named herself after somewhat obsolete.[13]

Deployed to Brockton Bay, Flechette pulled Parian away from Bambina at the cape gathering before the fight with Leviathan started.[35]

She was able to reliably damage the Endbringer.[36]

Was brought onto the Brockton Bay Wards team.

Almost succeeded in capturing Skitter, however, Taylor talked her way out of it and shook Lily's belief in her own righteousness.

She eventually talked about the incident with Ms. Yamada.

Defected from the Wards and started a relationship with Sabah.

Participated in the fight at New Delhi, being outfitted with her flechettes by her old teammate Jouster.[37]

Lily was 'visited' twice by March while she lived in Brockton Bay. On this second 'visit' Parian was kidnapped, presumably to lure in Foil.[38]

Has settled into a routine as Parian's lieutenant. while preparing to deal with a hostage situation she caught up with some of her old Ward teammates. She had taken to imbuing a dagger with her effect and letting Parian incorporate it into her creations, like a fluffy scorpion.

Killed several of The Slaughterhouse Nine-Thousand and the Gray Boy clone.

During her battle against Scion, Khepri noticed that he was dodging shots from Foil. When he gave up hope, Foil was able to wound him, opening a hole to his true body through which he was destroyed.[39]

Stuck with the Tattletale and remaining Undersiders despite tension.

Was present during Mathers Compound Assault.

She gets targeted by her longtime nemesis again, which forces Undersiders to mobilize and get on the run.

When Undersiders and Breakthrough joined forces, she was in a group that went after Love Lost.[40] Later in the night she joined the combined group that captured Cradle. At the dawn of the next day Lily got leads from Narwhal, and decided to end March and her megacluster once and for all.[41]

Foil was alongside The Undersiders and Breakthrough during the oversight duty of Titan Oberon and Eve. During the battle of titans she stayed with the rear group, initially taking potshots at Oberon, and then enchanted chain-hook, that was delivered by Rachel and was able to seriously gouge titans' back.[42]

Foil saved Chastity from near-lethal fall, when they were forced to retreat.

Later, she was provided with a weapon by Antares and delivered to Eve, where Foil carved out a nice chunk of titan out, and then was evacuated by Antares alongside Damsel of Distress[43] Later in the fight she continued gouging titans, until she was recovered with Parian's glider. Afterwards she was intentionally kept away from Parian by Tattletale and was deeply shocked by the reveal of intended application of Parian's power.[44] She moves out from Undersiders to another settlement with her old NY teammates.[45]

Flechette participated in the initial engagement with The Simurgh alongside Rachel Lindt, unlike the majority of Undersiders, who remained in the Wardens' HQ.[46] 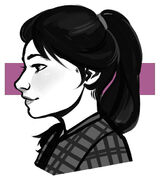 Illustration by LinaLinZ on deviantart

Illustration by LinaLinZ on deviantart

Illustration by kingdaume on deviantart 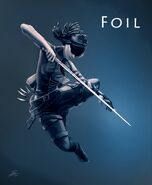 Foil & Parian by aerryi on DeviantArt.