The Endbringers are monstrous beings that take turn attacking locations around the globe to cause as much damage as they possibly can. Apparently unkillable, the Endbringers retreat to their respective domains to heal after they have sustained sufficient damage, only to attack again months later.

According to Tattletale’s power, the Endbringers were never human and have no vulnerable organs. Rather, the Endbringers appear to be made out of some type of a crystalline material. In addition, they consist of about 200 layers in the main body and 33 in the limbs, each one approximately twice as hard as the previous one. These layers surround its core, the only part of its body that is actually vital.

An Endbringer's skin is "hard as aluminum alloy, but flexible"; and its strength, toughness, and healing factor increase exponentially. 3% deeper in toward core of arms, legs, claws, tail, or .5% in toward core of head, trunk, neck, tissues are hard as steel. The tensile strength of the material roughly doubles with each layer, every 0.5% of the way towards the center of his body and every 3% of the way toward the center of their extremities; Wildbow has confirmed [1][2] that "extremities would take 30 trillion atmospheres of pressure to damage." The core of an Endbringer would require around five hundred and sixty novemdecillion[3] MPA of pressure; in practice, only parahumans capable of breaking the laws of physics can seriously harm an Endbringer.[4]

However, a concentrated attack with enough force to destroy the surface of a planet would be sufficient at killing an Endbringer in one shot.[5] While even an attack of that magnitude would not destroy all layers of the Endbringer body, enough energy to obliterate it instantly would be transmitted into the core, resulting in a 'definite kill'. In theory String Theory's Driver weapons pose a significant threat to the Endbringers. As a consequence they carefully plan their appearances as to eliminate any possibility of facing her in combat.[6]

Due to their density, Endbringers are immune to most teleporters. They count as living matter for the purposes of the Manton Effect.[7][8]Endbringer cores employ space-warping that interferes with some powers.[9] When they take damage they leak a thick ichor-like substance, suggesting a non-standard cardiac system. Their nervous system is also foreign enough to prevent body control powers from working. They regenerate quickly as well, even in the middle of a battle. The deeper layers regenerate faster because the material from the intact layers expands to fill in any damaged or missing areas.

Behemoth — also known as "Hadhayosh" and "Prathama" — was the first Endbringer to appear, making its first appearance in the Marun Field of Iran on December 13, 1992[10]. It has the ability to manipulate multiple forms of energy (electrical, thermal, kinetic, and etc.) while bypassing the Manton Effect. Because of this, it gained a reputation as the 'hero killer,' possessing a high body count at short range.

Leviathan — also known as "Jormungand" or "Jörmungandr" — appeared in Oslo, Norway on June 9, 1996.[11] It has macro-hydrokinesis, speed, and a water "afterimage" that follows behind it and moves as fast as Leviathan itself. It was known for causing immense environmental damage, devastating areas such as Newfoundland and Kyushu to the point of uninhabitability.

The Simurgh — also known as "Ziz"[11] — appeared in Lausanne, Switzerland on December 30, 2002[10]. It has psionic abilities, precognition, and the ability to draw on Tinker powers around it in order to build its own Tinker devices. The Simurgh is known to adjust the events in places it attacks to set up the survivors to be "walking disasters" that happen days, months, or even years after. Affected areas were quarantined to try and mitigate these effects, such as in the case of Madison, Wisconsin.

The first Endbringer, Behemoth, appeared in 1992 in the Marun oil field of Iran, beginning a series of attacks at various locations worldwide, spaced out by several months. The appearance of Behemoth was a major factor towards the creation of the PRT, which labelled the Endbringer as Case 2 in their case files.[19] For the Quattuorvirate, the presence of Behemoth, as well as the potential for future capes of his caliber, was also a major motivating factor for the formation of their team and the continued work of Cauldron.[20]

Over the next several years, the Endbringer attacks continued to escalate. Once Behemoth began to be "too predictable," the second Endbringer, Leviathan, appeared in 1996, in Oslo, Norway.[21] Worldwide defense efforts began to coordinate forces against Endbringer attacks; apparently in response to these efforts, in 2002, the third Endbringer, the Simurgh, made her first appearance, appearing docile at first before attacking and revealing herself to be an Endbringer.[22][21]

The three Endbringers continued their worldwide attacks over the next decade, creating immense destruction. An attack from Leviathan on Newfoundland sunk the entire island, killing the tinker Andrew Richter, whose creation Dragon later joined the Guild[23]; a separate attack from Leviathan sunk the island of Kyushu, despite resistance from Lung.[24] The benevolent tinker Sphere was turned into future Slaughterhouse Nine member Mannequin by an attack from the Simurgh; another Simurgh attack on Madison, Wisconsin brought the Travelers to Earth Bet, later bringing about the Echidna.[25]

The Endbringers have killed countless people in their attacks and wiped out several notable heroes. They have caused demographic and political shifts and environmental degradation on a scale not seen outside natural disasters. In addition to the physical damage and loss of civilian lives, their attacks have had the effect of killing or otherwise removing parahumans who served as luminaries and leaders willing to sacrifice themselves for the greater good, perhaps contributing to more prevalent cynicism and hopelessness in the general population.[26] Conversely, without the Endbringers there would be fewer parahumans than there would otherwise be, or a coordinated Cape community.[27][28]

Image by ImSkepticap on Deviantart 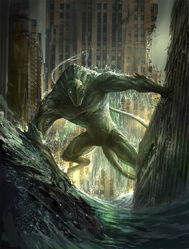 Leviathan by sandara on Deviantart 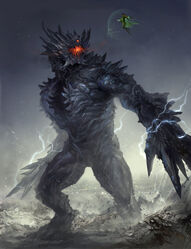 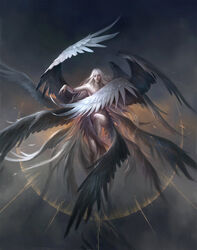 Retrieved from "https://worm.fandom.com/wiki/Endbringers/Spoiler-free?oldid=50122"
Community content is available under CC-BY-SA unless otherwise noted.