Eidolon (pronounced “eye-DOE-luhn,” rhymes with “colon”)[3] is one of the founding members of the Protectorate and the leader of the Houston Protectorate. He is generally considered to be the strongest parahuman and the fifth-strongest being on the planet, the first four being Scion and the Endbringers.[4]

His sole purpose in life is to help as many people as possible and help in the End of the World scenario - an event for which he is preparing his whole cape life, describing it as his legacy.[5]

Eidolon has an overwhelming reputation given that he's generally reckoned to be the fifth most powerful being on the planet.[6] People tend to resent his personality, but his sheer power and past records earned him great respect.[7]

When not dressed up as Eidolon, he is a middle-aged man, with thick eyebrows, thinning hair and heavy cheeks, big nose and ears. People were often struck by how normal, even slightly ugly he looked without his mask.[18][15][19]

His suit included a camera that recorded footage of his fights for later.[20]

He has the ability to equip himself with a tremendous array of varied powers but is limited to holding a few at the same time. He typically uses three, though he can take more at the cost of potency if required.[21] The powers he chooses take time to build up, but within minutes he can match the strength of veteran users of the same abilities.[22]

Even though his power is one of the strongest, he does not have much control over it.[23] He is limited to holding tighter to or discarding given powers, which are selected by his shard in accordance with what it perceives David needs.[24][25] As a consequence, Eidolon does not have enough awareness of his complete repertoire of powers.

His powers' potency, however, has been slowly weakening over time. Powers he summons take longer to build up and reach max strength, their maximum strength isn't as great as they should be or once were,[26] and he's losing access to more powerful abilities like Matter Destruction.[5] This leads him to look for a sense of challenge, in order to seek the untapped well of power he can feel when he is fighting.[27] In the meantime, he's been using Cauldron vials as booster shots.[28] Eidolon speculated that Ignis Fatuus was not as restricted as he was, and perhaps if Glaistig Uaine claimed his power, she would not be as well.[5] Skitter, however, speculated that Ignis Fatuus was enhancing his power using a variant of Scapegoat's power.[29]

He is later able to restore his energy reserves by digging up the power to sense and drain the shards of other parahumans, based on advice given to him by Glaistig Uaine.[5]

Glaistig Uaine referred to Eidolon's shard as the "High Priest".[30] It is the Thinker's counterpart shard to the Warrior's Queen Administrator.[31]

Eidolon is the unwitting creator of the Endbringers, due to his lack of active control over his power. It is suspected that the power acted on his subconscious need to engage in fights against enemies on his power-level. This may be due to his psychological issues of inferiority complex from his background. In addition, it is not certain whether he actually created the Endbringers, or if they were pre-made by Eden and his power just brought them forth after her 'death'. This is supported by their appearance in the Eden's interlude chapter, which contains a vision of the future as intended by the Entities.

The first clue is the words uttered by Scion and David's reaction to them: 'You needed worthy opponents'.[32][25] After Eidolon's death Simurgh, Khonsu, Tohu, Bohu, and Leviathan began behaving in an erratic manner.[33]

The final clue is Simurgh's weapon, which after the Gold Morning contained a male fetus "With large ears and a large round nose. Not attractive, as babies went."[34], which matches the general description of Eidolon.

In the sequel Fortuna's crystals display a version of the future where Simurgh overtakes dominant Titan network and summons more Endbringers using the shade of Eidolon.[35]

Before being approached by Doctor Mother he wanted to become more independent, applied to the army and was subsequently turned down, which made him try to commit suicide.[5]

When Eidolon gained his powers, he was one of a rare few who did not forget the vision of the Entity they saw. Doctor Mother speculated that his passenger had not been limited, unlike most powers.[36]

As Eidolon, he was a founding member of the Protectorate. After Hero's death, he became the leader of a smaller team based in Houston.[37]

In 2009 at Madison, Eidolon was a major part in fighting The Simurgh off and was recognized as such.[38]

During the fight he worked with Myrddin to mitigate the effects of tidal waves created by the Endbringer, along with helping the wounded heroes.[39] After Scion makes the appearance Eidolon helps pin down Leviathan with the manipulation of the water, freezing it into walls around the Endbringer.[40]

After Scion's arrival, Eidolon helps keep the Endbringer from retreating, arresting his momentum in the sky with a violet forcefield and he stands witness to the destruction of Behemoth with Scion's golden light.[41]

Tried to help against the Slaughterhouse Nine Hold Apartment Hostage but was turned away by Weaver, who pointed out that while she could be put down if she became evil, Eidolon would be much harder to contain.[42]

Eidolon participated in the oil-rig battle alongside the rest of the Triumvirate.[43] Glaistig Uaine taught him how to drain other parahumans, bringing him back to his peak strength. Together, they drove Scion across dimensions. Scion, increasingly hard-pressed, used his path-to-victory ability to convince Eidolon to give up.[5] Glaistig Uaine harvested Eidolon's shard[44] keeping him in the fight.

Image by [TheDeviantObserver on DeviantArt.

Illustration by sandara on DeviantArt. 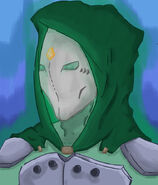 Illustration by TheKrustacean on DeviantArt.