The Thinker
The Scholar
Eden
Gaea[1]

Beacon 8.11 (Mentioned)
Eden, also known as the Thinker, is an Entity, Zion's counterpart, and the source of half of the superpowers granted to mankind.

Not much is known of Eden's personality, and it is difficult to describe the personality of an entity given the alien and transcendent nature of their being. However, it is known that Eden is relatively more creative and constructive than her counterpart entity, The Warrior. After her exchange with Abaddon and while approaching Earth, Eden does respond to Zion's concerns about danger with confidence, possibly indicating some aspect of her personality.[2][3]

Eden has similar abilities as The Warrior due to "multiple parallels" in their bodies and intelligence. Eden has the exact same Shards as the Warrior, though they were used differently.[4] A key difference was that Eden was also The Thinker. It was largely her role to understand, emulate and manipulate the lives of the Humans on the multiple versions of planet Earth. She made use of simulations of the future to set and investigate criteria in order to achieve the goals of the Cycle[5]. Part of her ability to simulate the future was given away.[6]

Eden planned and had begun constructing an avatar for herself using the Balance shard,[7] similar to Scion.

Unlike her silent counterpart, she would have been able to perfectly mimic a human. In her simulation of the future, she is able to speak and feign emotion in conversation.[8]

In her simulation of the future, she had powers that allowed her to read emotions[9]

She retained the ability to exchange small Broadcasts with the Warrior.[9] She would have had some kind of ability to create "Endbringer-lites" and direct them at targets.[10] Additionally she'd personally guide the placement of certain powers to shore up factions and extend conflict.[10] Further she'd be fully prepared to move to alternate Earths if/when Bet was no longer useful, or is actively targeting her.[10]

The Entities first arose on a grey, silty world, which they destroyed and rode the explosion out to new worlds.[11] The early ancestor of The Warrior first landed on a world with caustic acid rain, filled with plant life, as did another Entity.[12] The two parasitized the plant life to survive and reproduce, and experimented, using their abilities to nourish and protect the plants and seeing which ones survived.[13]

The two devoured the plants and took back their shards, forming once again into two singular entities. The second entity suggested to the ancestor that the two attack each other, in small, measured ways, and then recombine their shards and attack each other again so that they might find the combinations that survived and discard the rest.[14] After experimenting like that as well for a time, they destroyed that world as well, sending out countless fragments of themselves to other worlds.

The Warrior's ancestor landed on a world with advanced technology. The entities learned of gravity-warping technology, and were studied in turn by the species. Some of them sought to rule; those they had bonded with lost the war, and the entities were rooted out. They formed three larger Entities, who destroyed the planet and fled, offspring scattering in every direction. This time, they controlled their paths with gravity and warped space.[15]

The cycle repeated over three thousand times, and they grew more powerful each time. At some point, The Warrior's ancestors divided themselves into two entities, Warrior and Thinker, who would travel in pairs together. Each had slightly different attitudes and capabilities, so that they could compare different ways of doing things.[16]

As Eden began to approach Earth, she drew towards Scion before they began to pick out various sub-worlds for themselves and their shards. She felt that Scion's constant communications were distracting as she was using her powers to begin mapping out their actions after their arrival. She started to reform herself for a deeper simulation when she noticed a third broadcast. Recognizing that it was a broadcast from another Entity, Eden hesitated before sending a broadcast signaling her location.

The third Entity sent a garbled reply and Eden spent time analyzing it. She was then met by the third Entity who rammed against her in an ancient tradition meant to exchange shards. She worked to salvage key shards and give ones she could afford to lose on to the other Entity. Eden and the third Entity broke apart before Scion broadcasted his concern.[3]

Eden sent a confident response back and allowed Scion to take over some of her duties before she looked through her new shards.[3] After looking through them, she began to form a simulacrum of the host species, set out criteria for an optimal future, and then looked for a future that matched that optimal future.[5]

Scion interrupts the simulation, asking about their destination, and Eden absently agrees. She thinks on the future she had seen and starts to refine it. She reorganizes herself as she approaches their destination and sends Scion a confident reply when he expresses concern. Eden continues to work on her reorganization until she hits the ground.[2]

On the way down, Eden alters one of the third Entities' shards, replacing her own ability to find the optimal future. She realizes that she has made a mistake too late to fix it, and hits the ground hard at one world's version of Cote D'ivoire, Africa.[17][18]

Later, Eden starts to pull herself together. She starts to experiment as she works to create a humanoid avatar. After some time, she raises her head and opened her eyes to see Fortuna standing before her. She realizes that Fortuna possessed the shard she had discarded and restricts it - rendering her and others like her immune to the shard's future-seeing power.[19] Eden then dismissed Fortuna before it continued to create her avatar and bent over.

Doctor Mother drove a knife into her neck - severing a connection when she was most vulnerable. Eden struggled to form itself and failed. Eden died.[20]

Following her death, Eden's body was used by Cauldron as a source of serums to give people powers by connecting them to Eden's shards. However, some natural triggers have an Eden shard, such as Vikare[21] and Leet.[22]

Zion found her body; Taylor speculated that he had used his path-to-victory ability to find a world where he would meet his partner again, unaware that she would be brain dead. He began destroying her body; however, the PRT Strike team led by Taylor was able to use the body one more time to psychologically wound Zion.[23] Throughout Gold Morning, the human forces repeatedly used several other imitations of Eden's body to torment Zion.

Contessa sees a vision of the Cycle. 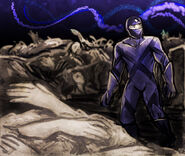 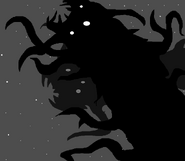 The two Entities travel through space.